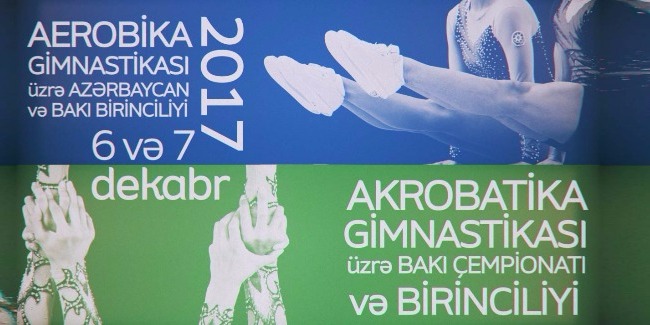 While the 2017 is coming to a close, Azerbaijan Gymnastics Federation is proceeding with its work on national events season in its full speed. In another gymnastics event to be organized in early December, acrobats, aerobic gymnasts and tumblers will take part in.

Thus, on December 6 & 7, the acrobats divided into the age groups of youngsters, children, pre-juniors and seniors, as well as 7-8, 9-11, 12-14-year-old aerobic gymnasts, sharing the same Field of Play, will compete for the medals at Milli Gimnastika Arenası (National Gymnastics Arena, subsidiary hall). And on the tumbling track, gymnasts included into the age groups of youngsters and pre-juniors, will determine the best ones among themselves.
The athletes, taking part in the tournament, will represent Sports School of Nizami district, Baku Gymnastics School, Ojag Sports and Neftchi Clubs.

Within the 2-day tournament with an involvement of different gymnastics disciplines, the contests with prizes and flash mobs with a participation of junior gymnasts are expecting the spectators.

The tickets to the tournament can be purchased from the Arena’s ticket office. A cost for the ticket is 5 AZN.

The detailed information about the tournaments is available on the federation’s official website.