Rhythmic Gymnastics is sport discipline, where gymnastics exercises and dance steps are executed to music with (Rope, Hoop, Ball, Clubs, Ribbon) and without apparatus.

At present, performances without apparatus are not executed at large-scale international competitions. Teams in group exercises demonstrate 2 routines: the first one – 5 identical apparatus (for example: 5 Balls, 5 pairs of Clubs, 5 Hoops), the second one – 2 different apparatus (for instance: Hoops & Clubs, Ribbons & Balls, Ropes & Balls). 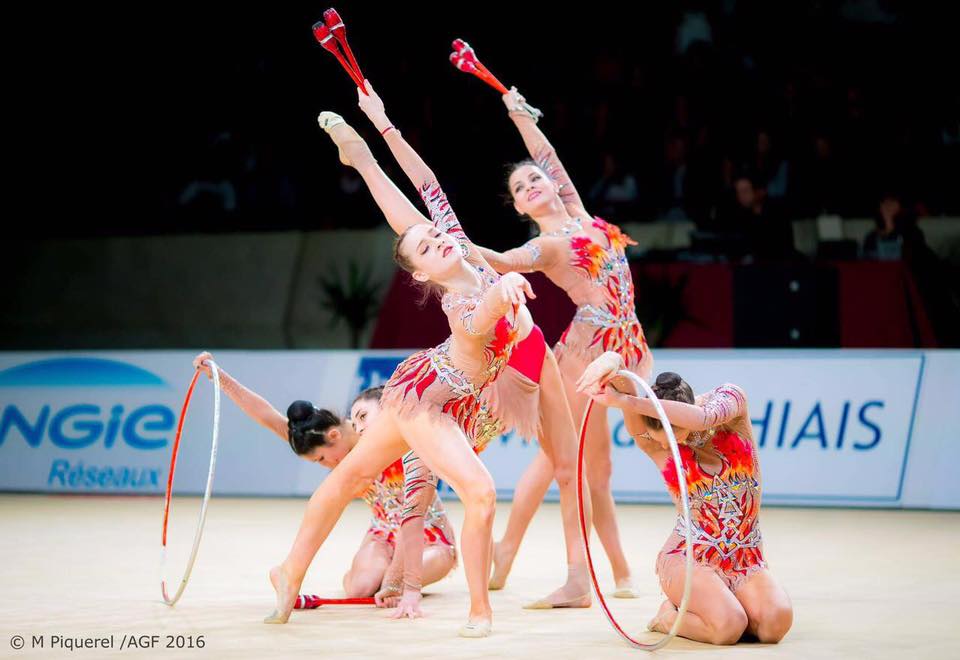 All performances are demonstrated on gymnastics floor having dimension of 13x13 m. The musical composition is chosen according to wishes of gymnasts and coaches. Duration of each routine in the individual program should not exceed one and a half minutes, while, in group exercises, this limit is two minutes and thirty seconds. The classic All-Around (4 performances in Individual program and 2 routines in Group exercises) is included into the program of the Olympic Games. In addition to All-Around, gymnasts performing in individual program and within teams in group exercises traditionally compete for set of medals in Apparatus Finals (except for the Olympic Games). There are also team competitions in Rhythmic Gymnastics where the total results of several gymnasts, sometimes, total score of both individual gymnasts and groups (regardless of different age) are taken into account at the same time.

Rhythmic Gymnastics in the world

Rhythmic Gymnastics has its roots in antiquity. The evidence of it can be found on pottery and pyramids of ancient Egypt, where women in tucked position and even dancing in groups with balls have been depicted.

As a sport discipline, Rhythmic Gymnastics began to be formed in the 19th century. French vocal teacher, stage art theorist François Delsarte (1811-1871) believed that physical exercise was a key to poise, beauty, health and success. The Delsarte`s "system of expression" was promoted as beneficial in improving of performances in singing, dance and theatre. His ideas on movement and aesthetics form the basic principle of Rhythmic Gymnastics today: expression through movement. 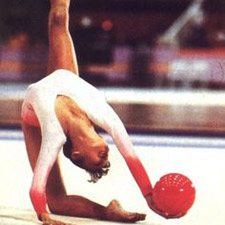 The ideas of Swiss composer and teacher Émile Jaques-Dalcroze (1865-1950) were inspired by a mixture of music and dance. The institute, founded by him in Geneva, continues to teach rhythmic gymnasts using the eurythmics methods he first pioneered.

In 1911, Rudolf Bode, a German educator from Dalcroze's school, founded the Bode School for Rhythmic Gymnastics and promptly began educating hundreds of teachers. The school, which still exists today, was a major contributor to the technical development of Rhythmic Gymnastics. 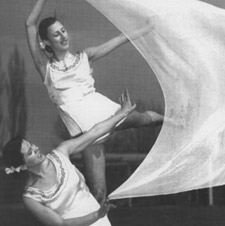 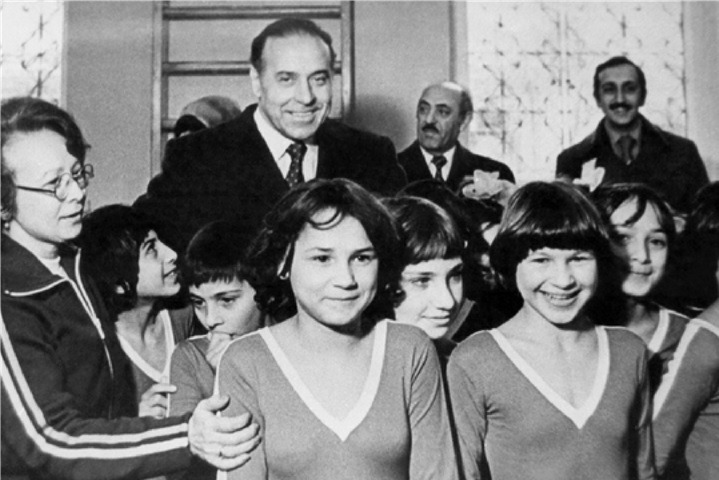 History of foundation and development of Rhythmic Gymnastics in Azerbaijan dates back to the 40s of the last century. The formation of this sport discipline in the country is related with name of Nadejda Merkulova. Azerbaijani gymnasts performed on the international arena within the USSR National Team. Lina Vinnikova was the first gymnast among them to participate in the 1st International Gymnastics tournament held in Germany in 1961. 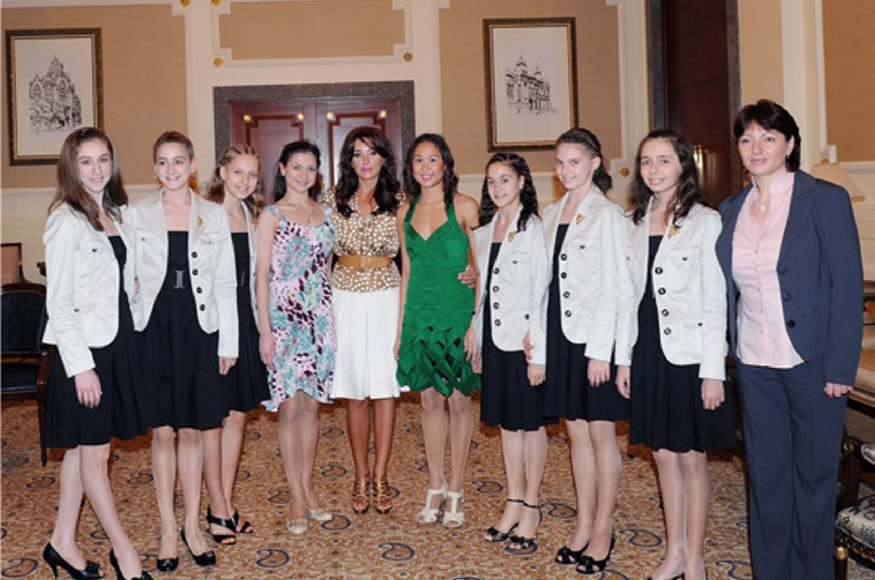 In 2003, Azerbaijani gymnast Dinara Gimatova, performing at the World Championships in Budapest (Hungary), qualified for Athens-2004 Olympic Games for the first time in history of National Gymnastics. At this event, Azerbaijan was represented by Anna Gurbanova, who replaced her teammate Dinara Gimatova due to the injury she had sustained. 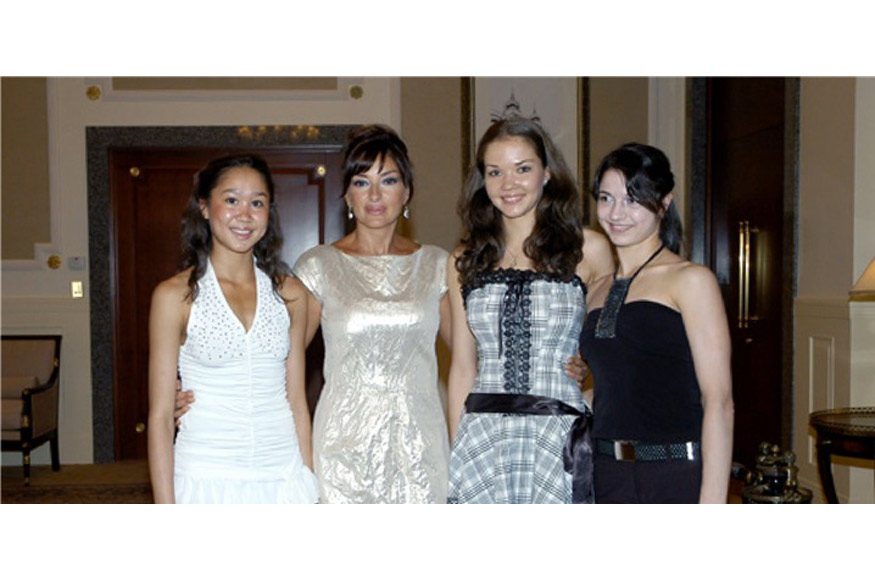 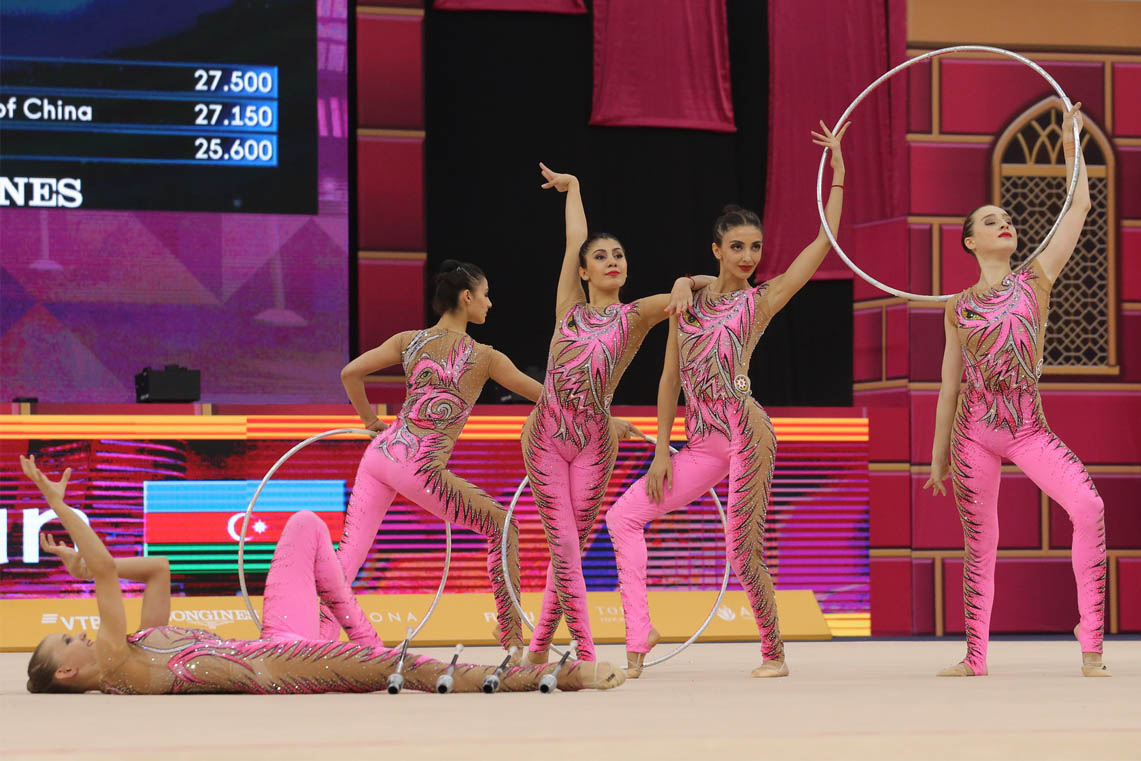 Four years later, Aliya Garayeva competed in the All-Around Final of the Olympic Games held in London in 2012 again and took the 4th place as a result.

Representing Azerbaijan at the Rio-2016 Olympic Games, Marina Durunda performed in the final of the 10 strongest gymnasts.

According to the results of the World Championships held in Baku in 2019, the Azerbaijani National Team was successful in two Qualifications for the Tokyo-2020 Olympics. Zohra Aghamirova ensured the place for the country at the Games in individual program. The team in group exercises consisting of Aliya Pashayeva, Diana Ahmadbayli, Darya Sorokina, Ayshan Bayramova, Zeynab Hummatova qualified for the Olympics as well. Thus, our country will be represented both in the individual program and competitions of teams in group exercises at the Olympic Games again.

In 2007, Aliya Garayeva was honored with a title of European Champion for her performance with a Rope for the first time in gymnastics history of the country. Following this success, our gymnasts mounted the podium of the European Championships in team competition (2007, 2009), Apparatus Finals (Anna Gurbanova / 2009; Marina Durunda / 2015) and All-Around (Aliya Garayeva / 2010, 2012). 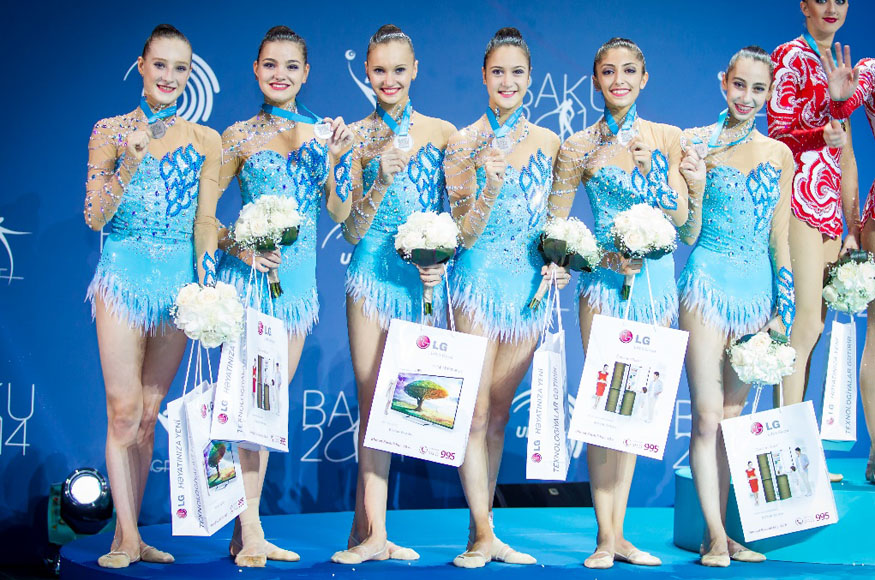 For the first time in history of Azerbaijani gymnastics, a senior team in group exercises consisting of Siyana Vasileva, Aliya Pashayeva, Diana Doman, Aleksandra Platonova, Aynur Mustafayeva and Sabina Abbasova won the Silver medal in the Final with 3 balls & 2 ribbons under continuous applause of Baku audience at the European Championships held in our capital city in 2014.

In 2018, our team in group exercises (Siyana Vasileva, Aliya Pashayeva, Diana Doman, Ayshan Bayramova and Zeynab Hummatova) was honored with the Bronze medal (3 Balls & 2 Ropes) at the European Championships held in Spain (Guadalajara).

Our team in group exercises with the same line-up became the winner of the 2018 World “Challenge” Cup series with 3 Balls & 2 Ropes according to the total score. 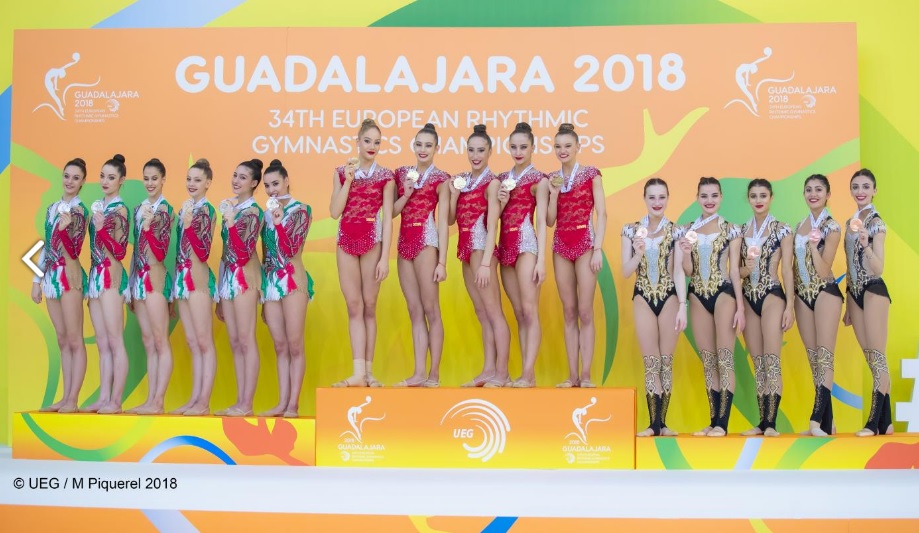 In 2019, Zohra Aghamirova (individual program) won 2 silver medals in the All-Around and Final exercise with clubs within the framework of the Summer Universiade held in the City of Napoli (Italy).

As for our junior gymnasts, they repeatedly became the prizewinners of the European Championships:

The first gymnast represented our country at Rhythmic Gymnastics events of the Youth Olympic Games was Yelyzaveta Luzan. Thus, she won the Gold medal in a combined team competition at the Games held in Buenos Aires (Argentina) in 2018.

Arzu Jalilova, one more young gymnast of Baku school formed in Rhythmic Gymnastics over the last years, has went down in history of Azerbaijani Gymnastics as Silver (Ball) and Bronze (Rope) medalist of the 1st Junior World Championships held in Moscow (Russia, 2019). 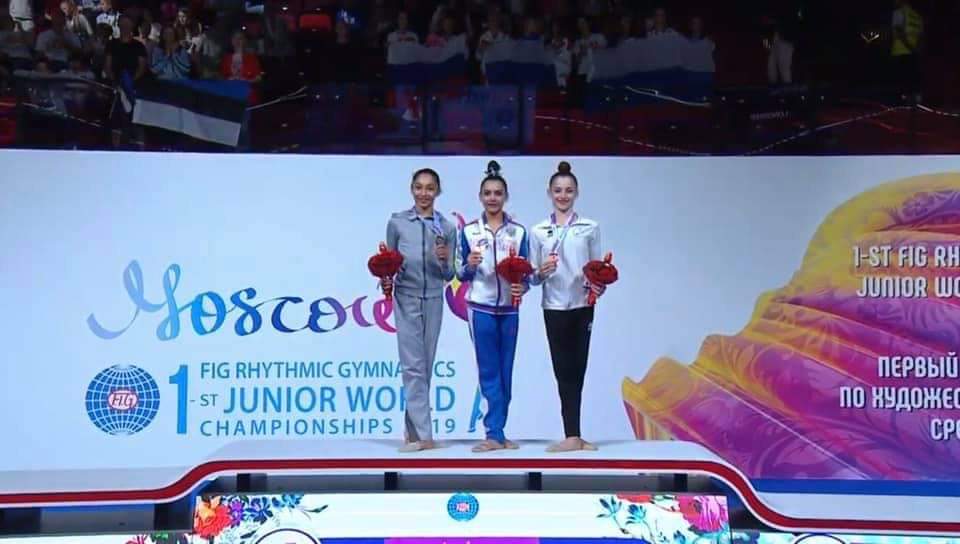 At present, all necessary conditions have been created for the Azerbaijani National Team in Rhythmic Gymnastics at Milli Gimnastika Arenası (MGA, National Gymnastics Arena). An Opening Ceremony of this unique sports facility took place in 2014 with a participation of the country’s President, Mr. Ilham Aliyev, and First Vice-President, AGF President, Mrs. Mehriban Aliyeva. The 2014-European Rhythmic Gymnastics Championships was the first large-scale international competition held at MGA which is assigned only for gymnastics disciplines.

In out-of-competition days, not only the gymnasts of the National Team, but also athletes from different countries of the world, coming to Baku for the training camp, take advantage of the conditions created at MGA.

Along with preparation of high-performance gymnasts, one of the main objectives of AGF is to raise the level of skills of professional coaches and judges in the country. For this purpose, there were organized the FIG Academy Levels (Level 1 / 2013; Level 2 / 2014; Level 3 / 2018) for Rhythmic Gymnastics coaches in Baku. In 2017, the FIG Intercontinental and International Judges’ Courses in Rhythmic Gymnastics were held in the capital city for the first time. The federation periodically organizes the courses for coaches and judges on national level as well.

In 2019, the Head Coach of the Azerbaijani National Team in Rhythmic Gymnastics, Mariana Vasileva, was awarded with the FIG “Honored Coach” diploma.

Azerbaijani judges constantly take part in the evaluation of performances at the World and European Championships. They are also invited to act as neutral judges of the events by the European Gymnastics and FIG.

Rhythmic Gymnastics sections have started to be opened in regions since 2010. At present, there are gymnastics sections operating in Khirdalan, Sumgayit, Goychay, Ganja, Lankaran, Masalli, Nakhchivan, Gusar, Shirvan, Kurdamir, Mingachevir, Ismayilli, Shamkir, Zagatala, Gakh, Gobustan and Aghdash. Since 2014, Interregional Cups have been organized within the framework of the national competitions. The Azerbaijan Rhythmic Gymnastics Championships was held out of the capital - at the Gusar Olympic Sports Complex in 2011 for the first time.

Over the last years, Rhythmic Gymnastics has turned into a favorite sports discipline of girls in our country and a number of gymnasts engaged in this discipline has increased. Certainly, the success of our national gymnasts and development of this gymnastics discipline in our country inspire the growing generation. During the international competitions hosted in Baku, the spectators share the success and failure of each performing gymnast, as they know more about the rules according to which the performances are evaluated.

Senior individual gymnasts demonstrate performances with four apparatus – Hoop, Ball, Clubs, Ribbon. According to the FIG rules, the Rope will be replaced with a Hoop in the performances of junior individual gymnasts from the next Olympic Cycle (2021-2024). In the coming years, the Rope will be included into the program of junior group exercises only. 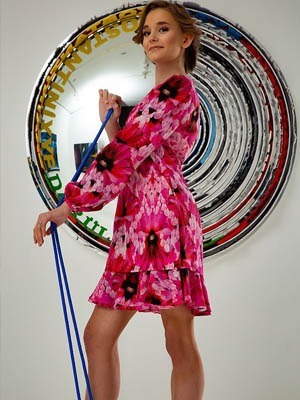 Rope
A rope is made of hemp or synthetic material. It can be monotonous or colored, and its length must be proportional to the height of a gymnast. Rope exercises require agility, jumping skills and coordination. 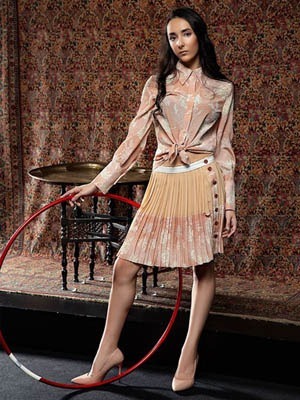 Hoop
A hoop is made of plastic. Its interior diameter may vary from 80 to 90 cm, while its weight constitutes 300 gr. Many gymnasts decorate them with a colored tape to give it more beauty (usually in the color of the leotard). 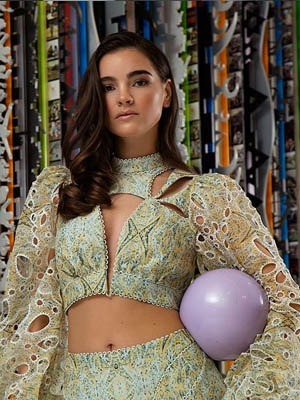 Ball
A ball is made of rubber or synthetic material. Diameter of this apparatus is 18-20 cm, while weight is 400 gr. The ball can be of any color. It is traditionally considered rather elegant and lyrical apparatus than dynamic. 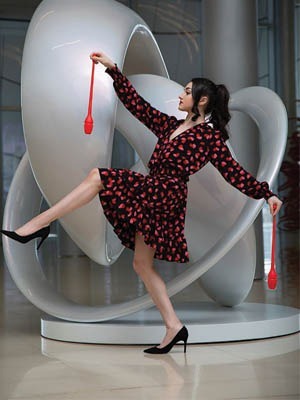 Clubs
Clubs are made of synthetic material. The length of the clubs is 40-50 cm, while weight of each club is 150g. This apparatus can be monotonous or decorated with a special colored tape. Clubs are especially popular with ambidextrous gymnasts. 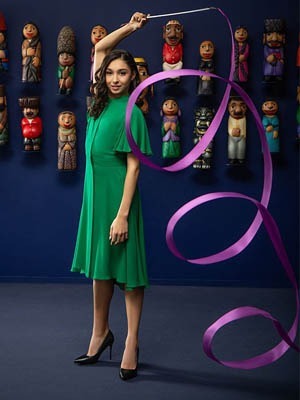 Ribbon
A ribbon consists of stick and ribbon. Its length is 6 m for senior gymnasts and 5 m for juniors. The width constitutes 4-6 cm. The ribbon can be monotonous or painted in any color. The stick can be of cylindrical or conical form, made mainly from plastic, bamboo or fiberglass. Ribbon is the most eye-catching apparatus in all of Gymnastics. Handling with the ribbon requires powerful shoulder and arm muscles.