Gymnasts test their strength in the All-Around, Apparatus Finals and Team Competition at large-scale competitions, including Olympic Games.

Strength, flexibility, grasping agility, acrobatic elements and the ability to move from one side of the apparatus to another one enable the gymnasts to demonstrate an irresistible and breath-taking performances. At all the events, the difficulty and execution of movements are evaluated, taking into account a number of criteria like dynamics, release and re-grasping of the apparatus, impressive height and distance. In comparison with other gymnastics disciplines, in Men’s Artistic Gymnastics, the gymnasts compete for the highest number of medal sets.

The beauty of Men's Artistic Gymnastics lies in its adaptation to modernity and constant evolution by retaining the courage and technique coming from ancient times.

Men`s Artistic Gymnastics in the world

Gymnastics traces its roots in Ancient Greece. The ancient Romans also practiced Gymnastics, but it was mostly used to improve the physical preparation of soldiers. Pommel Horse was one of the original gymnastics apparatus introduced by the Romans to teach soldiers complex techniques of mounting and dismounting a horse.

Friedrich Ludwig Jahn (1778-1852) is considered to be the founder of modern gymnastics. German educator laid down foundations and developed a set of rules for group-based exercises for the first time. Competitions in this discipline followed soon. The early gymnastics events were held outdoors with performances using rope climb, rings and other apparatus. There were also executed group calisthenics routines and team apparatus exercises, such as group Parallel Bars. 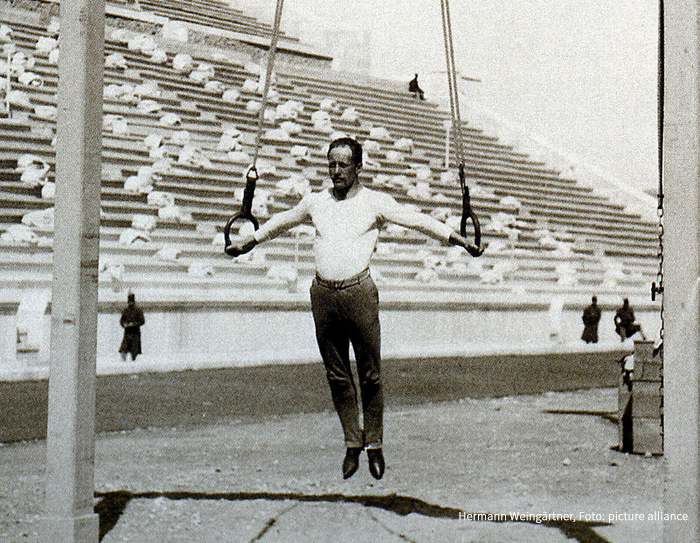 Men's Artistic Gymnastics was included into the program of the Olympic Games held in Athens in 1896.

The 1st World Championships in Artistic Gymnastics was held in 1903. During the 1952-Olympic Games in Helsinki (Finland), some kind of revolution took place in gymnastics. Performances on 6 apparatus used nowadays were presented at these Games for the first time. 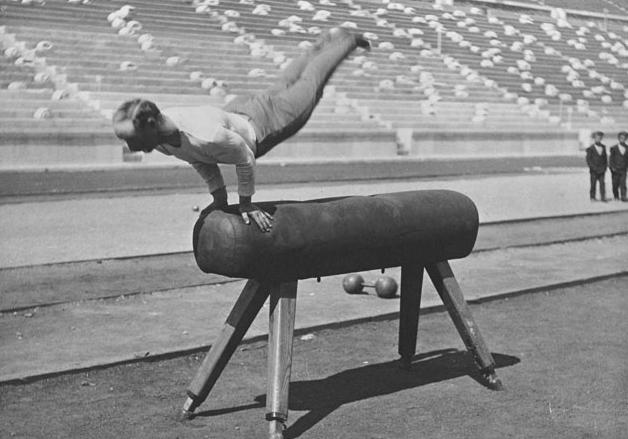 Swiss coach Arthur Gander (1909-1981), who was president of the International Gymnastics Federation (FIG) from 1966 to 1976, played a very important role in developing of the first Code of Points, the basic evaluation system which is still in use today by gymnastics judges.

Currently, the World Men's Artistic Gymnastics Championships are held every year, except the year when the Olympic Games takes place.

Men's Artistic Gymnastics has started to be developed in Azerbaijan since 1930s. The first Republican Championship in this discipline was held in Baku in 1939. 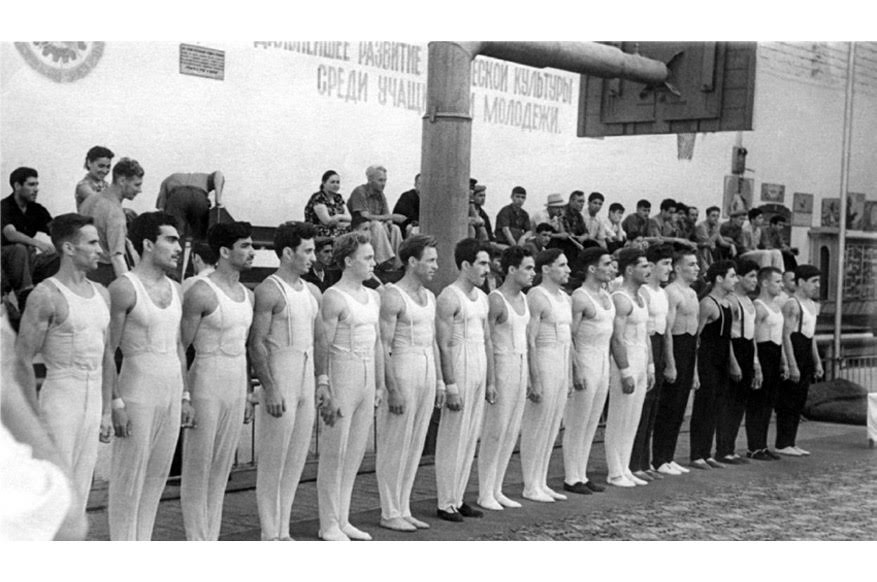 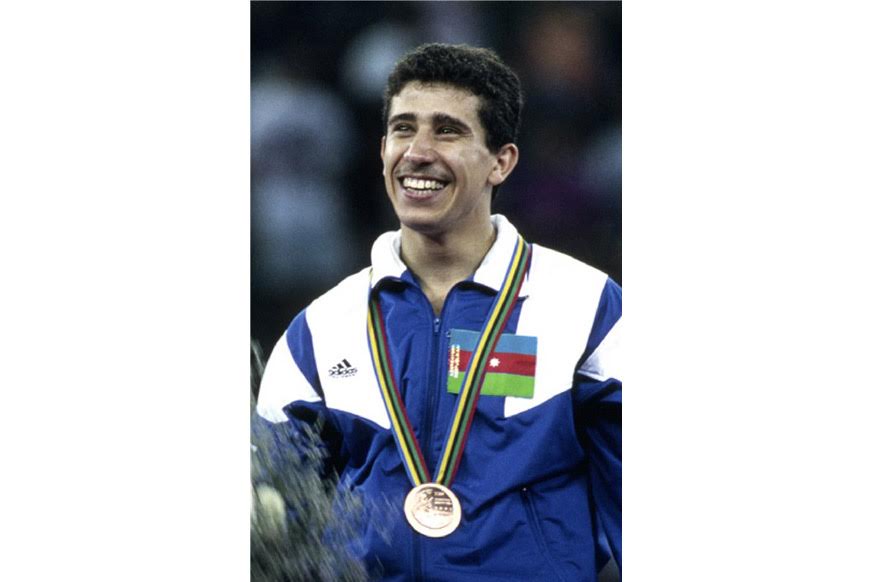 After Azerbaijan has gained its independence, Shakir Shikhaliyev was the first gymnast to represent the country in the Men's Artistic Gymnastics events of the London 2012 Olympic Games (Great Britain).

Two gymnasts from Azerbaijan - Oleg Stepko and Petro Pakhnyuk qualified for the Rio 2016 Olympics (Brazil). Oleg Stepko reached the Games’ All-Around Final according to the total results shown on 6 apparatus at the Qualifications and performed among the 24 best gymnasts for the first time in history of Men's Artistic Gymnastics of independent Azerbaijan.

Our country will also be represented at the Tokyo 2020 Olympic Games in this sport discipline. Thus, at the 2019-World Championships held in Stuttgart (Germany), Ivan Tikhonov qualified to participate in the world's most prestigious sports event based on the results of the All-Around.

Gymnast Oleg Stepko won the “Bronze” at the 2015-World Championships (Glasgow, Great Britain) for the first time in history of Men’s Artistic Gymnastics of independent Azerbaijan in final exercises on Parallel Bars, and this result enabled him to compete in the Rio 2016 Olympic Games. 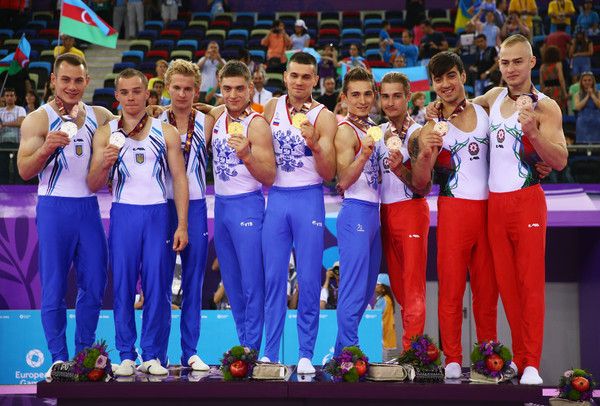 Participation of our junior gymnasts in a Team Competition for the first time in history of Azerbaijani Men's Artistic Gymnastics took place at the European Championships held in Bern (Switzerland) in 2016.

At the European Artistic Gymnastics Competition in Baku, qualifying for the 2018 Summer Youth Olympic Games, our country qualified for participation in such an event for the first time in gymnastics history. In October of the same year, Azerbaijan was represented by Samad Mammadli at the Games held in Buenos Aires (Argentina).

Samad Mammadli mounted the second step of the podium for his performance on Pommel Horse at Men's Artistic Gymnastics competitions of the 15th European Youth Summer Olympic Festival held in our country in 2019. 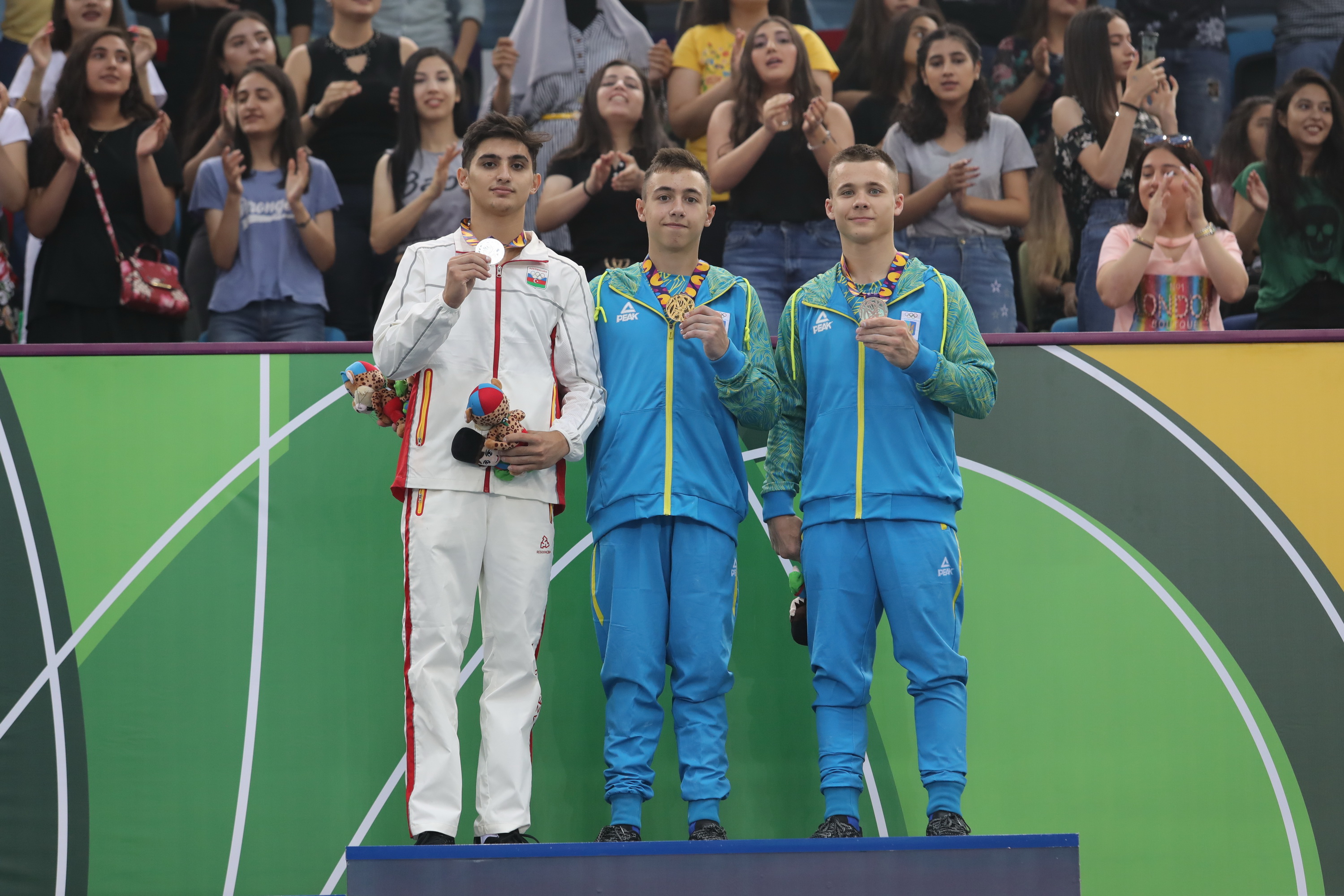 Currently, the members of the Azerbaijani National Team in this gymnastics discipline are training at Milli Gimnastika Arenasi (MGA, National Gymnastics Arena) which is provided with up-to-date equipment. An Opening Ceremony of this unique sports facility took place in 2014 with a participation of the country’s President, Mr. Ilham Aliyev, and First Vice-President, AGF President, Mrs. Mehriban Aliyeva. Baku spectators watched the splendid competition of the famous European Men's Artistic Gymnastics stars at this facility during the 1st European Games for the first time.

It has become a tradition for the world gymnastics stars to take part in the training camp held at MGA at least two weeks prior to each of these events.

One of the main directions of the development of Men's Artistic Gymnastics in our country is educating of specialists in this discipline and raising the level of their professional skills on a regular basis. For this purpose, there were held the FIG Academy Level 1 (2018) and Level 2 (2019) for coaches, as well as the FIG International Judges’ Courses in 2007 and 2017 in Azerbaijan accordingly. The federation periodically organizes the national courses for coaches and judges as well. 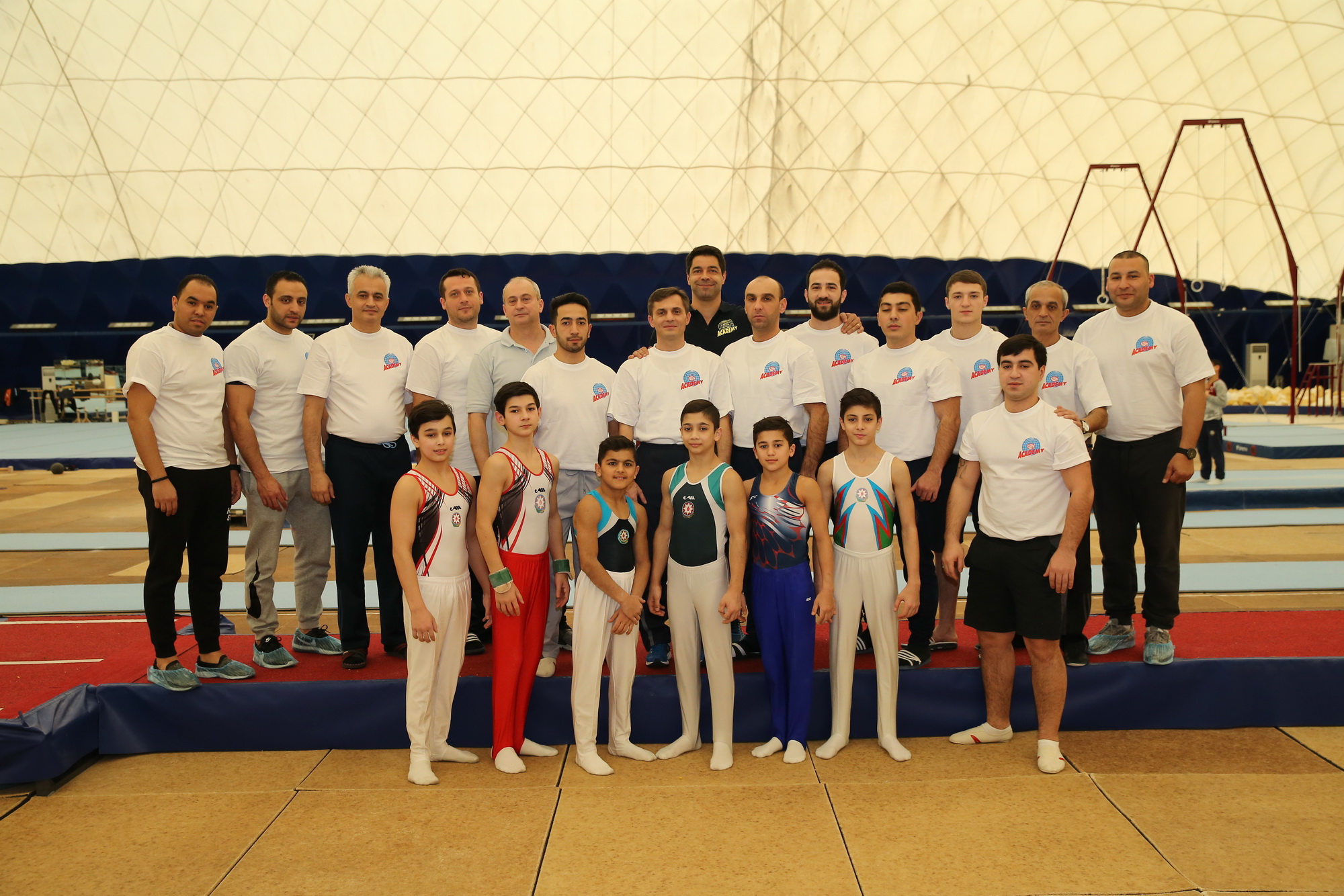 Rza Aliyev, Head Coach of the Men`s Artistic Gymnastics National Team, holder of the highest international judging category - FIG Brevet 1, was awarded with the “Gold Diploma” in recognition of his “long term distinguished judging service” by the FIG within the framework of the 2019 Artistic Gymnastics World Championships in Stuttgart (Germany). The Azerbaijani judge has already been invited by the FIG to evaluate the performances in Men's Artistic Gymnastics competitions organized within the framework of the three Olympic Games (London-2012, Rio-2016, Tokyo-2020).

Every national competition organized in Baku and every success achieved on the international arena, in their turn, serve to increase the interest of representatives of young growing generation in this sport discipline in our country.

In comparison with other gymnastics disciplines, Men's Artistic Gymnastics is the discipline where the highest number of apparatus is used – Floor Exercise, Pommel Horse, Still Rings, Vault, Parallel Bars, Horizontal Bar. As a rule, every famous gymnast has one or more favourite apparatus while performing on which he feels completely free and comfortable and he is remembered best for his performances all over the world. 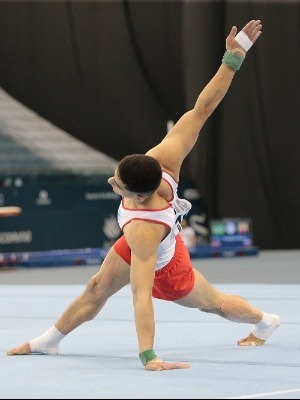 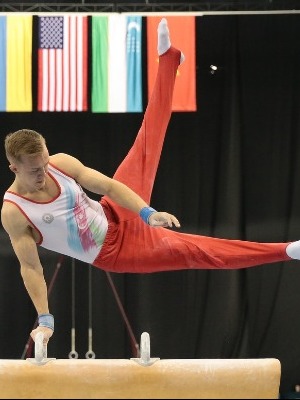 Pommel Horse
The apparatus is 115cm in height, 35cm in width, 160cm long. The length of pommels is 12cm while the distance between them is 40-45cm. During the performances on Pommel Horse, the gymnast can touch the apparatus only with hands. The movements on this apparatus consist of continuous rotations, circles, swinging with straddled legs or legs together, flipping, "scissors", flares, handstands and etc. 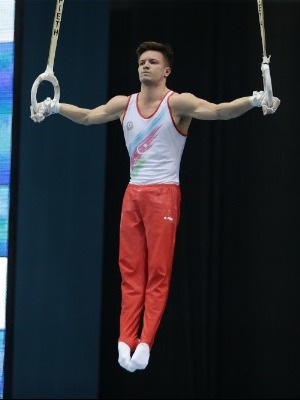 Still Rings
This apparatus consists of two rings 18cm in diameter suspended 2.8m above the floor. The distance between the rings is 50cm. Still Rings routines are comprised of swinging, strength and static elements. The gymnasts' performance program includes handstands, swinging, twisting and other elements. These exercises demonstrate not only the flexibility but also the strength of an athlete. 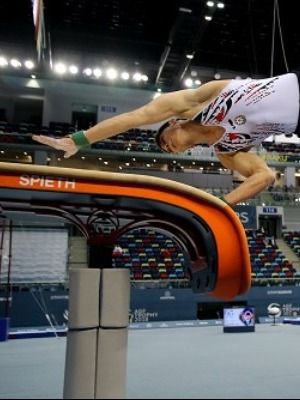 Vault
The Vault is 135cm in height, 1.20m in length, 95cm in width. The runway is 25m in length and 1m wide. The Vault is considered to be the fastest gymnastics apparatus. Gymnasts execute the Vault by running at full speed onto the springboard to make impact with the table with their hands, propelling themselves up into the air and over the table before landing back on their feet. The more flips and twists a gymnast can manage to perform before his feet hit the mat and he completes his routine, the more difficult the Vault and the higher the score will be. 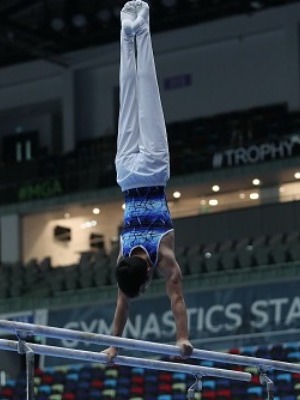 Parallel Bars
The apparatus is 2m in height from the floor and 3.5m in length. The height of this apparatus can be adjusted to suit the gymnast. A gymnast shows a variety of swinging and flight elements from a support, hang and upper arm position. The routine should flow smoothly from one element to the next. 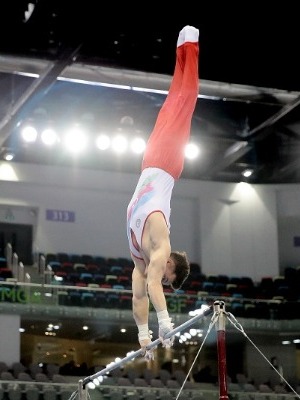 Horizontal Bar
The Horizontal bar is 2.8m high, 2.4m wide and 2.8cm in diameter. The exercises demonstrated on the Horizontal Bar are more spectacular distinguishing themselves with their splendidness. During the performance, the gymnast must demonstrate continuous swinging, various grasps, releases and re-grasping, rotation and flight elements, including the efficient transitions from one element to another.