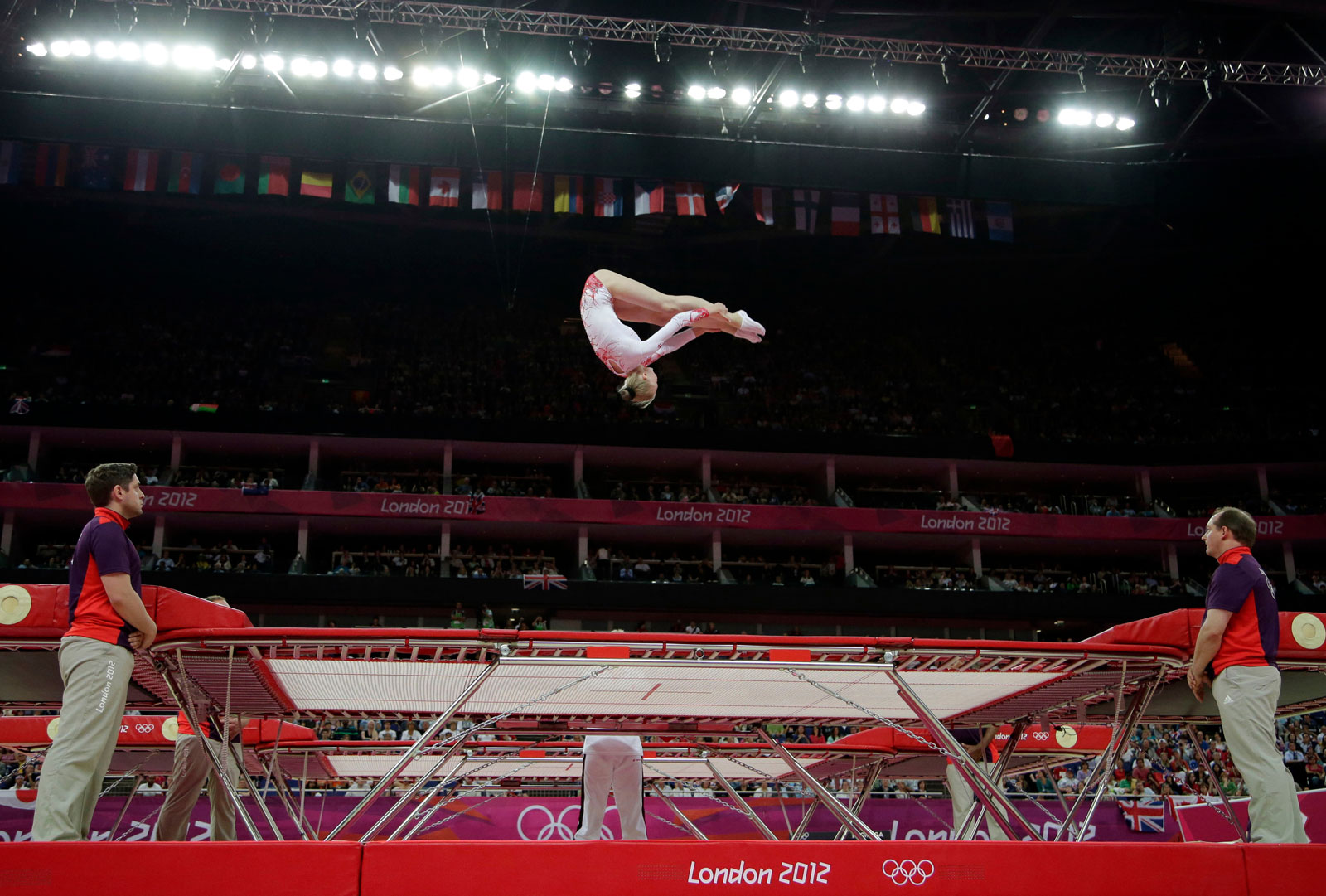 Trampoline Gymnastics in the world

The origin of Trampoline Gymnastics is connected with gymnast George Nissen from the U.S. In 1934, inspired by watching circus acrobats falling onto flexible safety nets and using the rebound to perform acrobatic skills, Nissen constructed the first prototype of a trampoline and called it after “trampolín”, the Spanish word for springboard. 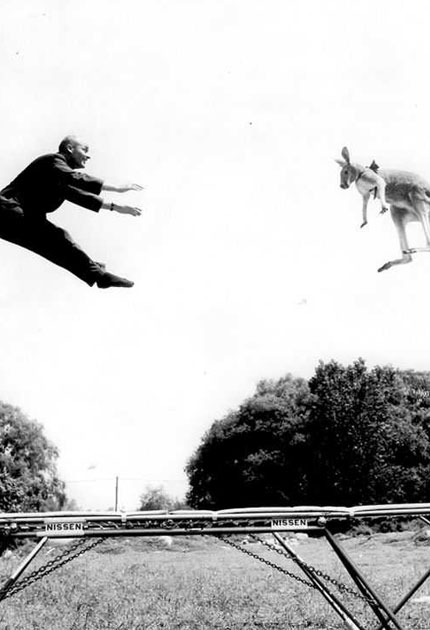 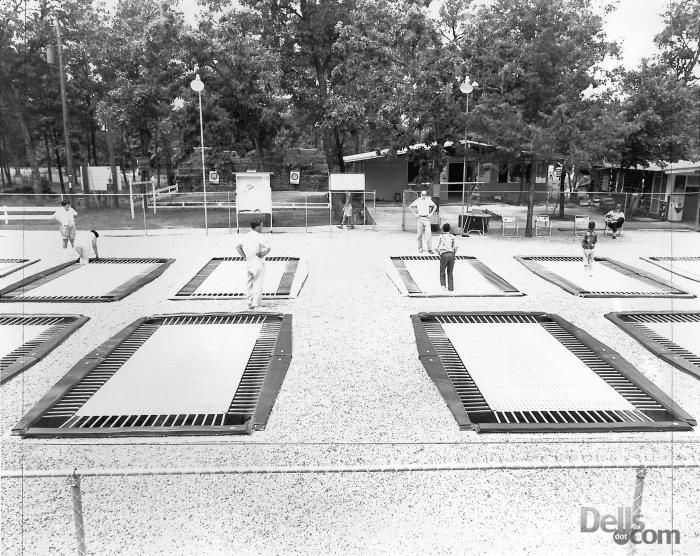 Tumbling became a part of the World Championships in 1965, while Double Mini-Trampoline was included into its program in 1976 accordingly.

FIT was dissolved in 1998 and Trampoline became discipline of the International Gymnastics Federation (FIG) since 1999.
Individual Trampoline has been a part of the Olympic program since 2000 Games in Sydney. At present, the World Championships in this gymnastics discipline is held every year, except the year of the Olympic Games. 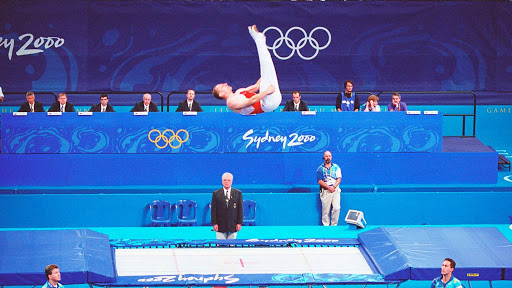 Tumbling, which is currently a part of Trampoline Gymnastics, was originally developed as one of the disciplines of sports acrobatics established in Azerbaijan in the 30s of the last century, as in the former USSR countries. Athletes of Azerbaijan SSR represented the Republic at the USSR Championships and the All-Union School Spartakiads.

The inclusion of Trampoline Gymnastics into the program of the 1st European Games held in Baku in 2015, has given an impetus to its development in our country since late 2013. As in all gymnastics disciplines, which newly took step towards development, foreign athletes and specialists were involved into the National Team at the first stage of development. Our gymnast Ilya Grishunin won the Bronze medal in the Individual Trampoline events within the framework of the European Games in Baku. 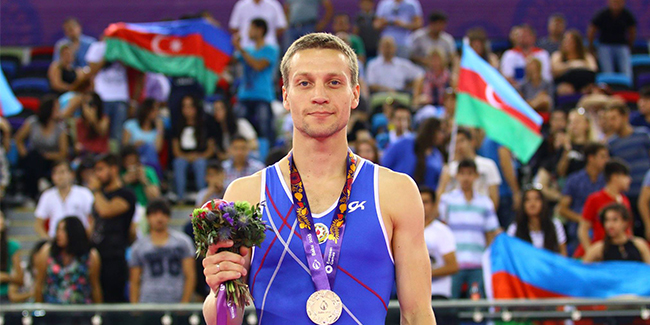 In 2016, gymnast Dmitriy Fedorovski became the Bronze medallist in the Double Mini-Trampoline competitions of the European Championships held in Valladolid (Spain), where Azerbaijan made its debut.

Our representative in Tumbling, Mikhail Malkin, won the Gold medal at the World Age Group Competitions held in Sofia (Bulgaria) in 2017 for the first time in history of Azerbaijani gymnastics. 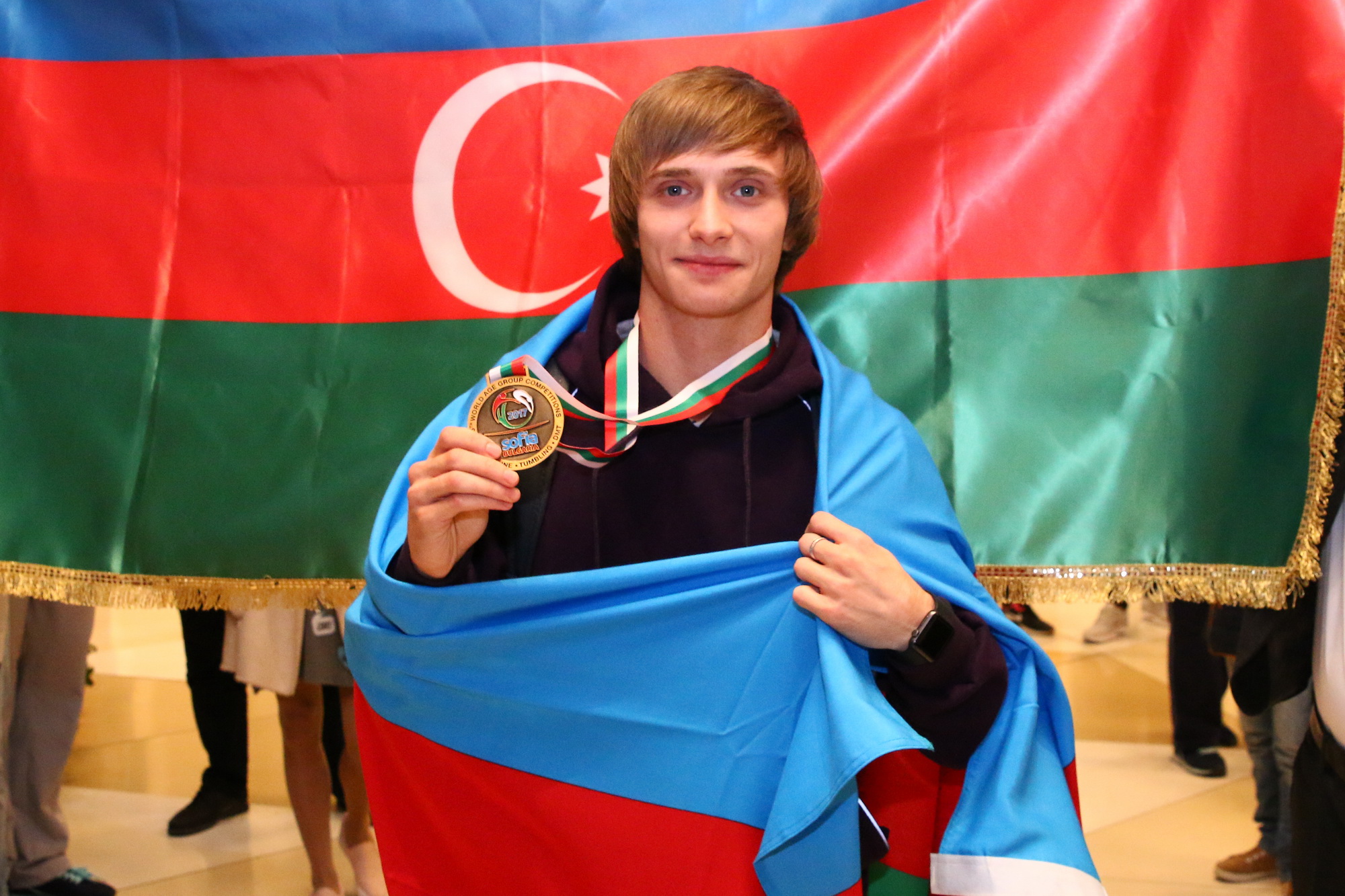 Veronika Zemlianaia and Sviatlana Makshtarova, who competed in the Synchronized Trampoline program within the framework of the 2017 World Games in Wroclaw (Poland), won the “Silver” for the first time in the country's gymnastics history.

In 2018, our gymnasts brought both “Gold” and “Silver” medals to the team`s medal box at the Continental Championships in this gymnastics discipline, which was organized in our country for the first time. Our tumbler Mikhail Malkin became the Gold medallist, while our female representatives in Trampoline Gymnastics, Svetlana Makshtarova and Veronika Zemlianaia, won the Silver medals in the Synchronized program. 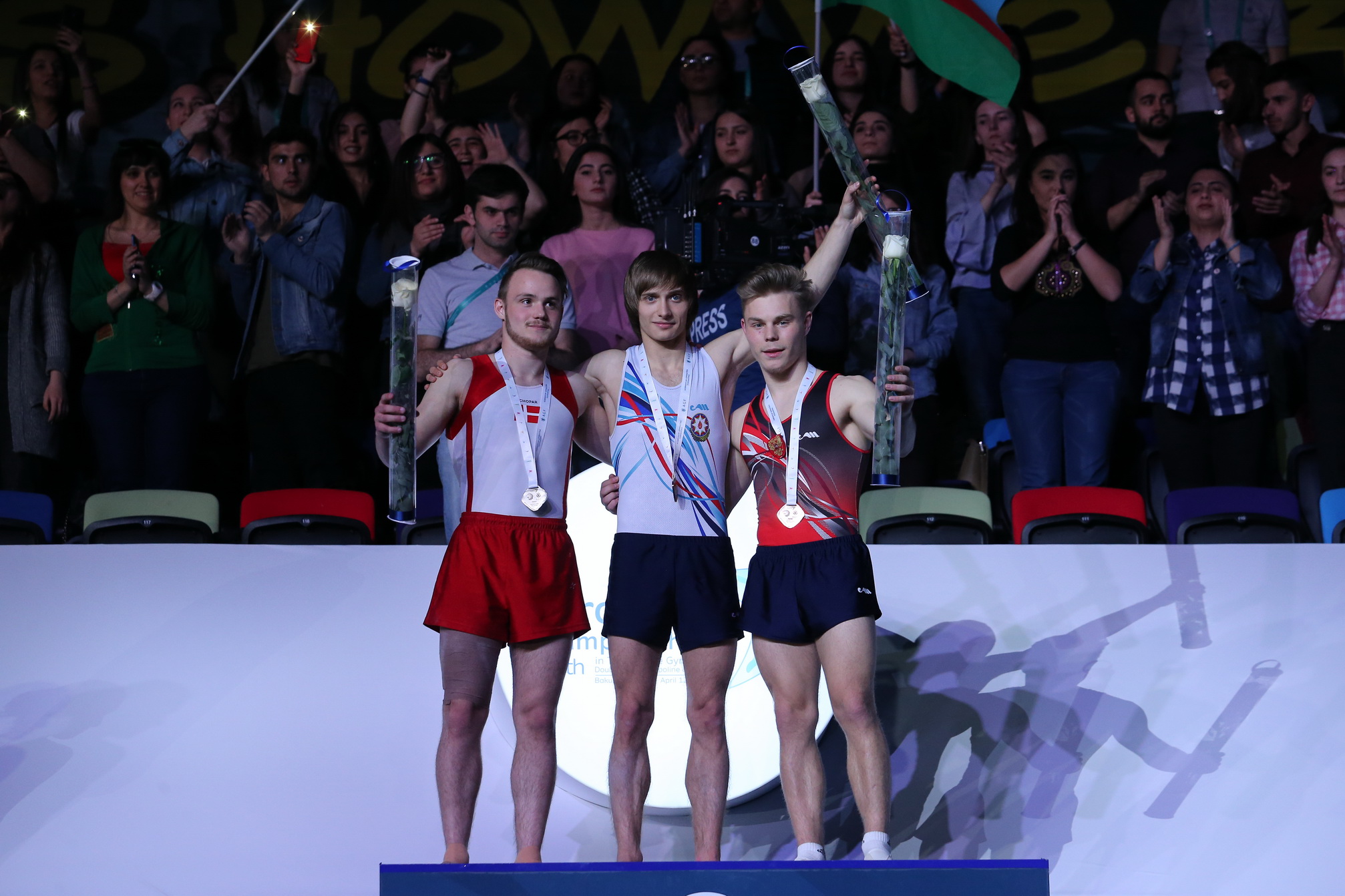 Our senior gymnasts have been among the prize-winners of the World Cup series and other competitions at different times, and have inspired the young growing generation with their successes.

Thus, our junior gymnasts have already represented our country with dignity on the international arena.

For the first time in history of Azerbaijani gymnastics, Magsud Mahsudov, who competed in the group of gymnasts aged 11-12, won the “Gold” in the individual program, while became the “Silver” medallist in the synchronized program together with Huseyn Abbasov at the World Age Group Competitions in Trampoline Gymnastics held in Tokyo (Japan) in 2019. Aleksey Karatashov, who represented our country among 11-12-year-old gymnasts in tumbling competitions within the framework of the same Championships, also became the Gold medallist. 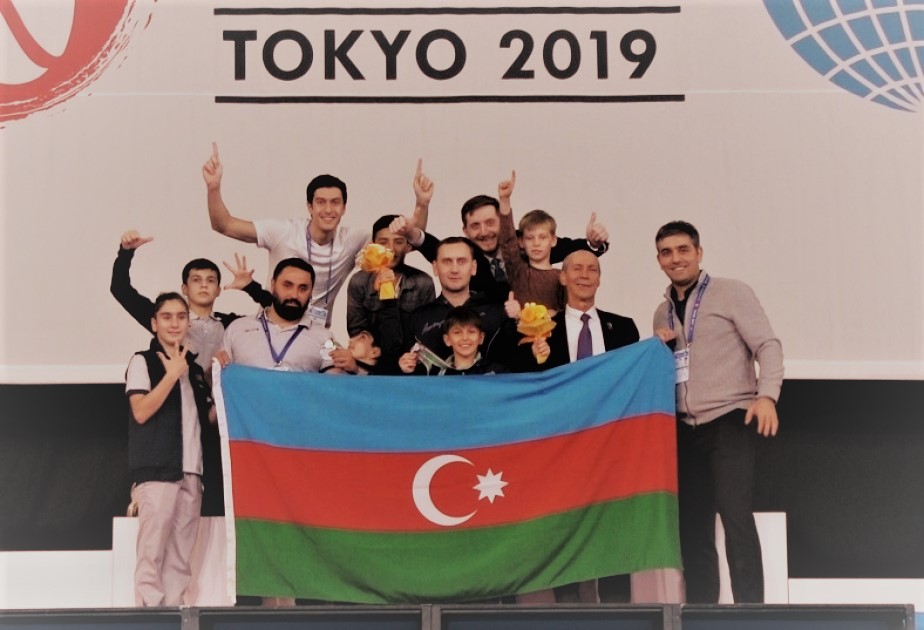 In 2014, an Opening Ceremony of Milli Gimnastika Arenasi (MGA, National Gymnastics Arena) took place with a participation of the country’s President, Mr. Ilham Aliyev, and First Vice-President, AGF President, Mrs. Mehriban Aliyeva. This sports facility has all the necessary conditions for the training of the Azerbaijani National Team in Trampoline Gymnastics. Baku spectators watched the performances of the famous European Trampoline Gymnastics stars at this facility during the 1st European Games for the first time.

One of the main directions of the AGF’s activity is educating of specialists in this discipline and raising the level of their professional skills on a regular basis in our country. For this purpose, there were organized the FIG International Judges’ Course in Baku in 2014 for the first time, as well as the FIG Academy Level 1 for coaches in 2019 accordingly. The Federation periodically organizes national courses for coaches and judges. 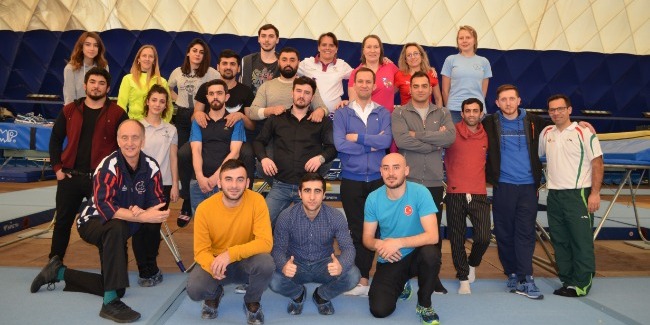 Azerbaijani judges take part in the evaluation of performances at large-scale competitions. They are also invited to act as neutral judges of the events by relevant organizations.

In recent years, along with Baku, sections in a number of gymnastics disciplines have been opened in our regions. Currently, there is Trampoline Gymnastics section operating at Gakh Olympic Sports Complex, and Gakh representatives already demonstrated their skills at Azerbaijan Championship in 2019. 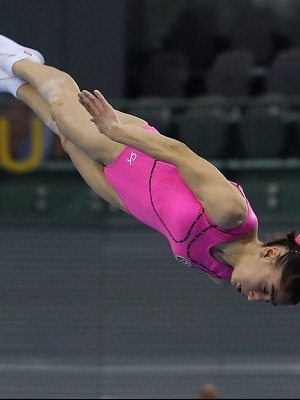 Individual Trampoline
Trampoline is a device consisting of a bed, strong fabric stretched between a steel frame using many coiled steel springs. Gymnasts bounce on Trampolines nearly 10 meters in the air performing 10 skills in sequence and without stops. During execution of the program, the objective is to perform more complex elements without deviations from the centre of the bed and at the highest possible point. Athletes must perform twists/flips from feet to feet, from feet to back/abdomen, tucked while jumping high in the air without stop. 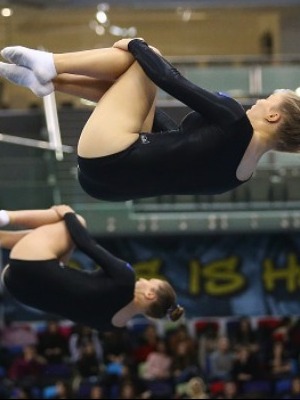 Synchronized Trampoline
In men's and women's events, two gymnasts perform the same exercise on two trampolines lined up side by side and must start routine facing the same direction. There is no requirement for them to twist in the same direction. 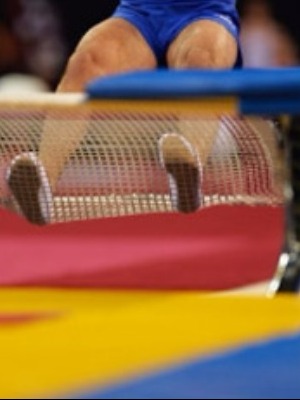 Double Mini-Trampoline
The Double mini trampoline consists of two parts - one part is angled, one part is flat and located at the end of a long runway. During the competitions, gymnasts sprint down the runway toward the angled trampoline bed and use it to catapult themselves into the air, performing a number of flips and/or twists before rebounding on the trampoline and immediately re-punching to perform a second, usually even more complicated series of flips and twists. This second element finishes on the landing pad behind the Double Mini-trampoline. 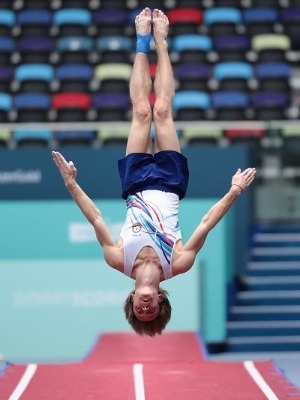 Tumbling
Athletes demonstrate a quick, crisp string of tumbling elements like the snare drum on the special spring floor the length of which is 25m and the width is 2m. The tumbling strip is preceded by a 10-meter runway, which gymnasts sprint down to gather momentum before hurling themselves into their tumbling sequences. At the end of the spring floor, soft landing mats are placed to absorb the impact of the grand finale of the pass, usually the most difficult and spectacular element of all.