Gymnasts test their strength in the All-Around, Apparatus Finals and Team Competition within large-scale events, including the Olympic Games. 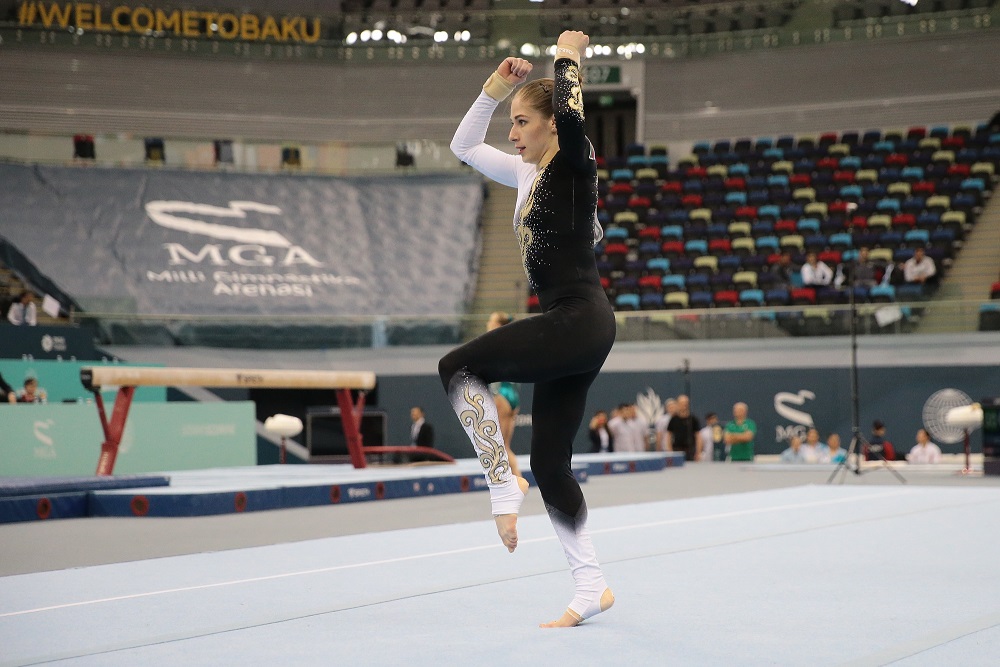 At all the events, the difficulty and execution of exercises performed by gymnasts are evaluated taking into account a number of criteria like dynamics, height and distance from apparatus.

The beauty of Women's Artistic Gymnastics lies in its reflection the perfect harmony of elegance, courage and strength.

Women's Artistic Gymnastics in the World

After the Industrial Revolution and consequent social changes, when women joined the workforce in large numbers, females of all classes began to show interest in sports. Group calisthenics, frequently called Swedish Gymnastics and commonly performed to music, was seen as attractive for women.

Friedrich Ludwig Jahn (1778-1852) is considered to be the founder of modern gymnastics. German educator laid down foundations and developed a set of rules for group-based exercises for the first time.

Women's Artistic Gymnastics has started to be developed in Azerbaijan since the 30s of the last century. Sport careers of Zuleykha Hajiyeva (master of sports of the USSR obtained in 1941), Natalya Abdinova (Champion in a Team Competition at the USSR Championships in 1968 within a team of the Central Council of “Dinamo” Sports Society), as well as Yelena Gurina, Mina Asgarova, Larisa Mehdiyeva (participants of international competitions), played an important role in the establishment of this sport in the country.

Unfortunately, after the dissolution of the USSR, Women's Artistic Gymnastics no longer existed in our country.

The inclusion of Women’s Artistic Gymnastics into the program of the 1st European Games held in Baku in 2015, has given an impetus to its development in our country since late 2013.

As in all gymnastics disciplines, which newly took step towards development, foreign athletes and specialists were involved into the National Team at the first stage of development.

Anna Pavlova, who represented our country during the debut of the Azerbaijani National Team at the European Championships (Sofia, Bulgaria) in 2014, became the Silver medallist on Vault. 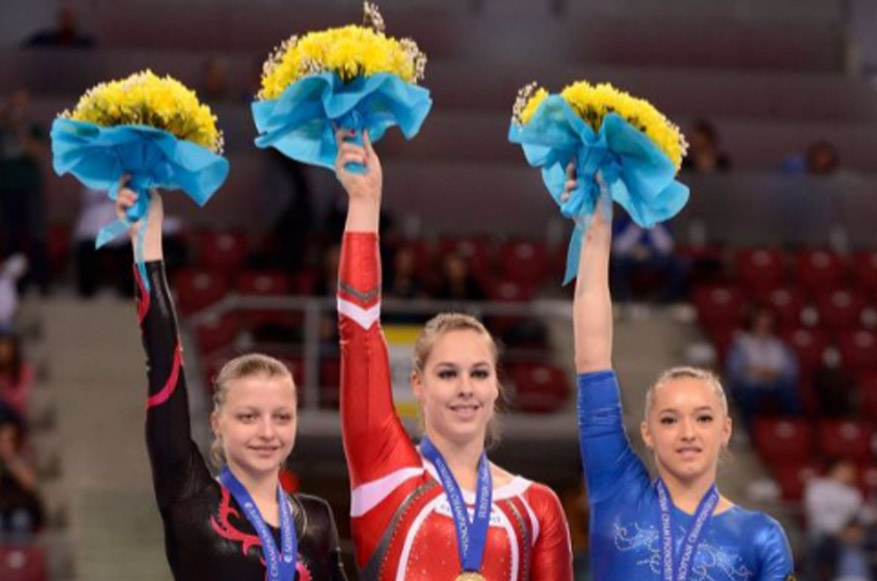 A gymnast M. Nekrasova won the “Gold” on Vault at the 30th Summer Universiade held in Naples (Italy) in 2019. 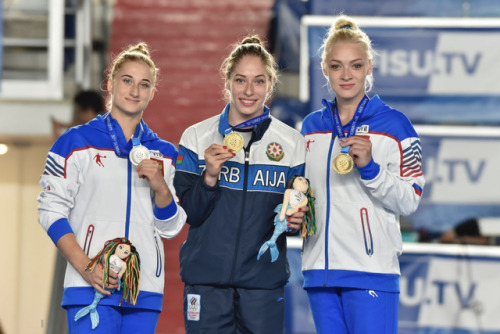 Our representatives in this gymnastics discipline have also been among the prize-winners of the World Cup series at different times.

For the first time in history of Women's Artistic Gymnastics, our country will be represented in the events of the Tokyo 2020 Olympic Games. This participation was ensured by gymnast M. Nekrasova, who received enough points in the All-Around Qualification of the 2019 World Championships in Stuttgart (Germany). 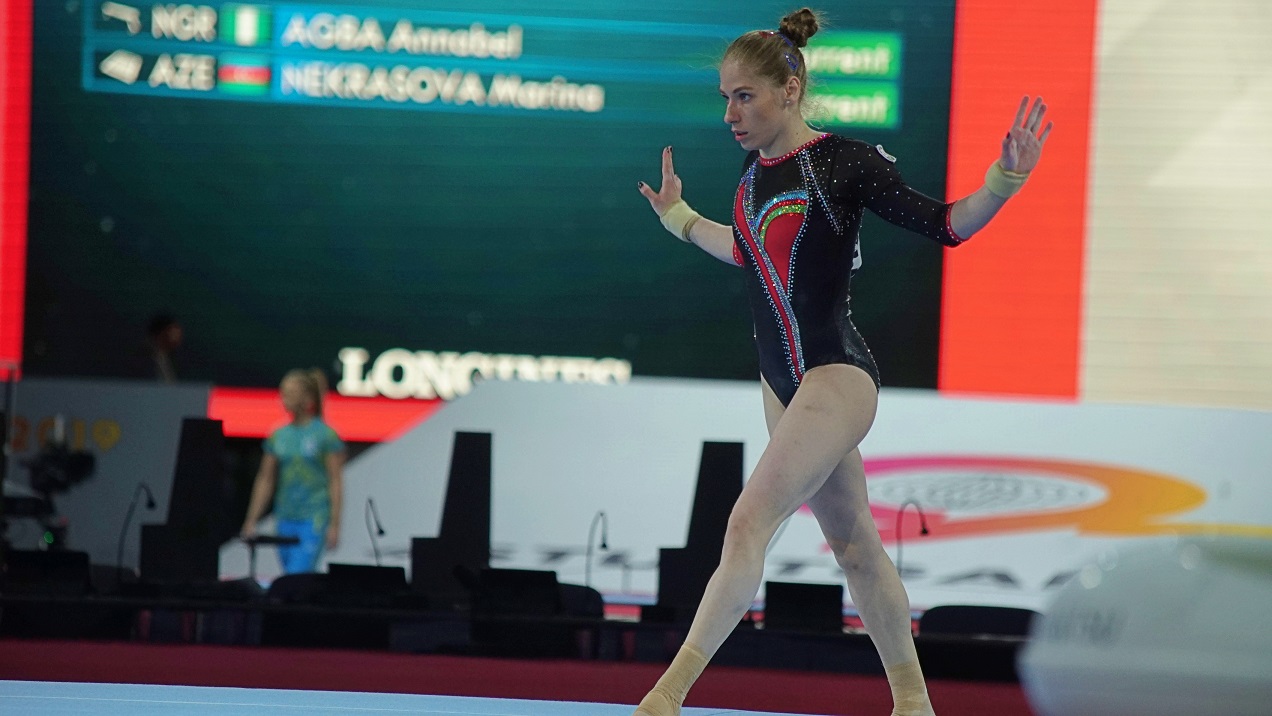 At present, members of the Azerbaijani National Team in this sport discipline are training at Milli Gimnastika Arenasi (National Gymnastics Arena, MGA), provided with all necessary equipment. In 2014, an Opening Ceremony of MGA took place with a participation of the country’s President, Mr. Ilham Aliyev, and First Vice-President, President of Azerbaijan Gymnastics Federation (AGF), Mrs. Mehriban Aliyeva. Gymnastics stars demonstrated their splendid performances at this facility at the Women’s Artistic Gymnastics events of the 1st European Games.

One of the main priorities of AGF is educating of professional coaches and judges in this gymnastics discipline. For this purpose, there were organized the FIG International Judges’ Course in Baku in 2014. Moreover, the Federation periodically organizes national courses for the purpose of raising the level of the professional skills of coaches and judges.

For the purpose of development of Women's Artistic Gymnastics and mass involvement in this discipline in our country, AGF is carrying out a number of activities, along with hosting international competitions.

Women's Artistic Gymnastics comprises the performances on 4 apparatus: Vault, Uneven Bars, Balance Beam and Floor Exercise. As a rule, every famous gymnast has one or more favourite apparatus while performing on which she feels completely free and comfortable and she is remembered best for her performances all over the world. 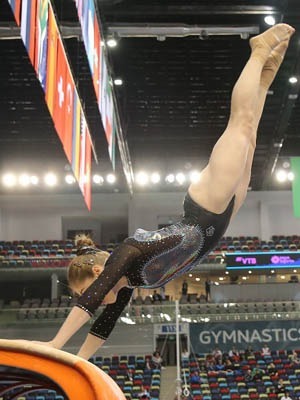 Vault
The Vault is 125cm in height, 1.20m in length, 95cm in width. The runway is 25m in length and 1m wide. The Vault, which is considered to be the fastest gymnastics apparatus, is executed by running and making impact from the apparatus. The more flips and twists a gymnast can manage to perform during her routine, the more difficult the Vault and the higher the score will be. Vaults should demonstrate great height and amplitude. 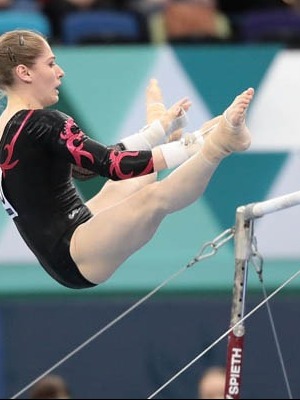 Uneven Bars
On this apparatus, the height of the highest bar is 2.5m and the height of the lowest bar is 1.7m from the floor. The distance between them is 180cm. If the gymnast is tall, the height of the upper bar can be increased by 10cm upon a gymnast’s request. Exercises should include elements that require swinging forward and backward, grip changes, and, at least one skill, where the gymnast releases and re-catches the bar. A spectacular dismount often completes the routine. 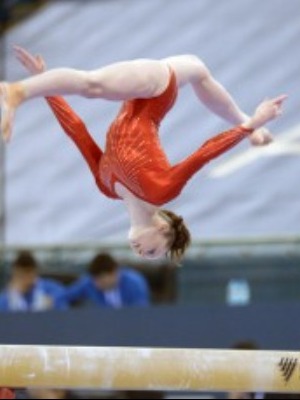 Balance Beam
The height of the apparatus is 1.25m from the floor, while the width is 10cm and the length is 5m. Beam routine consists of a variety of acrobatic elements, including dance steps, leaps, jumps, turns, balance elements, along with a series of flips and somersaults. The gymnast should use the entire length of the beam to show off her elegance, flexibility, rhythm and self-control. Execution of a number of acrobatic elements while dismounting from apparatus, makes the performance quite thrilling. 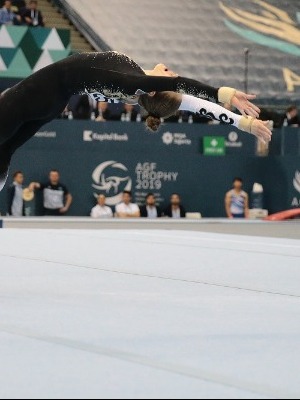 Floor
Floor Exercises are performed on a special gymnastics Floor mat measuring 12x12m with an additional 1m safety border at its edge. Floor routine accompanied by music should combine dance sequence and acrobatic elements. Ideally, the focus is on self-expression, with the gymnast presenting a performance, not a routine of prescribed movements. Individuality, originality, maturity, mastery and artistry in presentation are key ingredients for a good score.