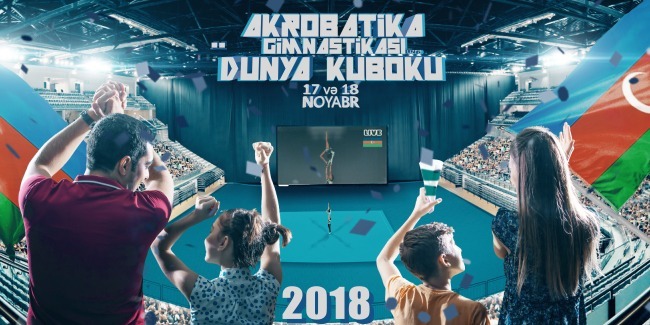 Thus, for the first time in Baku, there will be held the World Cup in one of the most interesting and exciting gymnastics disciplines - Acrobatic Gymnastics - at Milli Gimnastika Arenası (National Gymnastics Arena) on November 17-18.

During the two-day events, gymnasts born in 2003 and older will compete within Men’s Pairs, Women’s Pairs, Mixed Pairs, Women's Groups and Men's Groups. Teams of Belarus, Israel, Kazakhstan, India, Russia and Ukraine have provisionally been registered to participate in the competitions.

At this World Cup, our country will be represented by the Bronze medallists of the last European Championships, Mixed Pairs - Abdulla Al-Mashaykhi - Ruhidil Gurbanli and Aghasif Rahimov - Nurjan Jabbarli. Silver medalists of the World Age Group Competitions (2016) - Seymur Jafarov and Murad Akparov will compete for the best places within the Men's Pair.

The traditional “AGF Trophy” Cup will also be presented to Pairs and Groups having received the highest scores at the events.

The tickets are available at the MGA ticket office, as well as online https://ticketing.mga.az/. The price of tickets constitutes 10 manat for qualifications, 15 manat for finals.