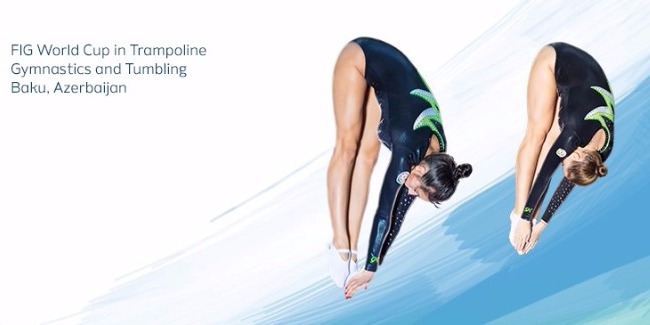 85 Trampoline and Tumbling gymnasts, arrived in our capital from 15 countries, entering into strong contest within two-days, will test their strength on the basis of the new Code of Points coming into force in 2017. The Qualifications to take place on the first day of the competitions to be followed by Finals next day.

At these events, Azerbaijan will be represented by Ilya Grishunin, Oleg Piunov, Ruslan Aghamirov, Sviatlana Makshtarova and Veronika Zemlianaia in the trampoline individual program and within synchro pairs as well as by Mikhail Malkin on the tumbling track.

The World Cup in Trampoline Gymnastics, the development of which started in Azerbaijan from the end of 2013, will be organized in our country for the second time, while Tumbling events of this kind, will make a debut in our country this year. Gymnastics competitions, always distinguished by its high-level organization, promises to be remembered by a number of new introductions this time as well.

Along with witnessing an interesting competitive rivalry in presentation of “flying” stars - Trampoline and Tumbling gymnasts - the spectators will also be able to participate in entertaining contests and flash mobs.

Tickets for events can be purchased at the ticket office of MGA, as well as, "Bazarstore" chain (Khatai and "28 Mall" branches). The ticket prices are 4, 6, 8 and 10 manats.

More detailed information about the competitions can be found on the federation’s official website.