"European Games is the most important event for me", Ilya Grishunin 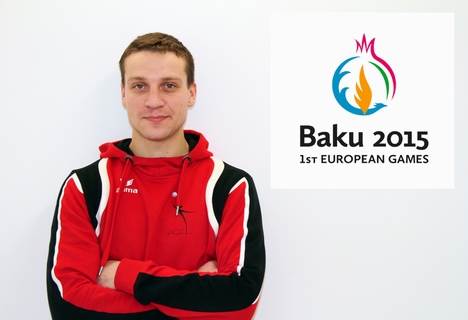 February is not far off, and in the meantime the European Games are getting closer and closer. A grand event, which is being held for the first time in history, will bring together 20 types of sports. Among them there will be all gymnastic disciplines, including rhythmic, acrobatic and aerobic gymnastics, women's and men's artistic gymnastics and trampolining.

Two male and two female gymnasts will represent Azerbaijan in trampoline gymnastics competitions. Following the program of the Games they will perform individually and in synchro pairs.

Traditionally, press service of Azerbaijan Gymnastics Federation decided to interview Ilya Grishunin - one of the possible participants of the 2015 European Games.

Tell us how did you started to do gymnastics. Why did you chose this sport?
I was brought to gymnastics (trampolining) by my mother, I haven’t chosen by myself. However, then I got used to it and realized that I can not live without it.

How do you think, could you perform in any other sport?
Sure. I think I would have been successful in all types of sports. If a person has a sports talent, then he has the prospects in all sports. For example, I like diving, gymnastics, boxing, football, hockey...

How do you deal with the emotions in the day of competition? Are there any special secrets of self-control?
Recently, for some reasons I do not care at all. I guess I somehow disconnect myself from all the fears, think that I should not be afraid - everyone else is experiencing the same thing. It helps.

How dangerous is to be engaged in professional sports, or it depends on the sport?
As they say, danger lurking around every bend, but if you ever get injured, in the future, brain automatically will analyze how to fall, so that nothing  will be damaged. Survival instinct is triggered even when you do not realize it.

Do you have an idol in sport?
Yes, it's Ole Einar Bjoerndalen, the Norwegian biathlete. I just wonder how the forty years-old man manages to win the Olympics. And the fact that he is a seven-time Olympic champion is striking and inspiring at the same time.

Tell us about your sports plans for the near future.
The plans are to win medals. At least, I would like to win the bronze medal at the European Games. At the World Team Championships I would like to get qualified for the 2016 Olympic Games. These are the plans.

What do European Games mean for you and how do you prepare for them?
For me it's a completely new competition. I'm getting ready for the Games very seriously, because for me it is the most important event. Especially because it will be held at home. Therefore, trainings are even 200 percent seriously.

If stay a little bit away from the sport - do you have any aspirations or dreams that you want to implement?
I have a aspirations in music. I compose club music mixing it on computer. Unfortunately, I can not do it fully because of lack of time and because of other factors. I hope that in the future I will be able to work in this direction.

Are you able to combine sport with normal life?
Sometimes I just don’t feel like doing anything or I do not have strength  enough. Sometimes there is not enough time. But one can and should set aside time for this.

Tell us about your family.
I have a wife, a child, he is year and a half. They are good, great, I love them. I want two more children (laughing).

What do your fans usually shout, and want do you want to hear from them?
I would like to see no one shouting, because in our sport it distracts (laughing). If during the football match one can shout something, we can be supported only by super professional person. I really liked the atmosphere at the World Championships in the United States: the background music played softly, the fans were all silent. This music helped to calm down very much.