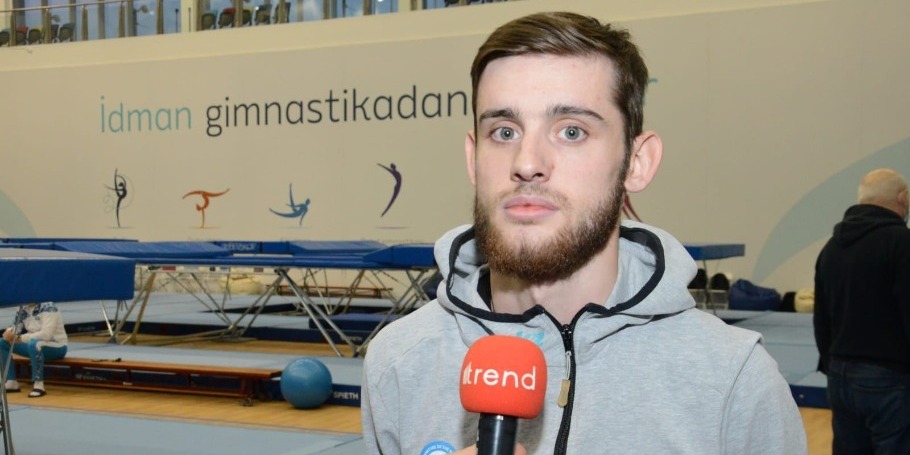 “Azerbaijan Gymnastics Federation (AGF) always organizes competitions very well”, said Kazakh gymnast Danil Mussabayev participating in the 35th Trampoline Gymnastics World Championships in Baku.
The gymnast mentioned that the hall of the Gymnastics Arena, where the competitions are held, is spacious and comfortable with good lighting:
“Team of Kazakhstan is probably coming to Baku for the sixth time, and in addition, to competitions, we regularly hold the training camps here. “Milli Gimnastika Arenasi” (National Gymnastics Arena) has an excellent condition, so, this time we came two weeks before the competition to adapt, prepare and perform well at the Championships.”
D. Mussabayev emphasized that during the pandemic, all necessary measures are taken at “Milli Gimnastika Arenasi”- the mask regime is observed, there are antiseptics everywhere, and etc.
The gymnast also mentioned that he considers the representatives of Russian Federation and Belarus as serious rivals at the upcoming World Championships:
“China is represented by strong gymnasts, but they came to the Worlds in Baku with young team. Russian and Belarusian athletes are serious rivals too.”
There will be held the 35th Trampoline Gymnastics World Championships in Baku on November 18-21. About 270 gymnasts from 33 countries will take part in the competitions.
During the 4-day Championships, gymnasts will perform in the individual program and within synchronized pairs on Trampoline, Tumbling and double mini-trampoline. The winners will be determined in the Team Competition as well.
According to the provisional schedule of the competitions, the first two days will be Qualifications followed by the Finals last two days. According to the rules, one participant can perform in several programs