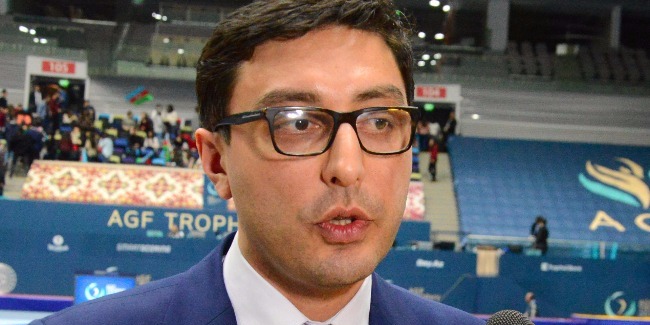 He said it is necessary to hold the competitions to promote new kinds of gymnastics which have been recently developing in Azerbaijan.

“The competitions would attract a large number of spectators,” he said.

"Azerbaijan Gymnastics Federation is developing six disciplines of gymnastics - four of them Olympic and two non-Olympic,” he added. “We are trying to equally develop all gymnastics disciplines. We have achieved success in some disciplines and it is necessary to work more to achieve the same results in others.”

“We have the National Gymnastics Arena and it is possible to hold local and international competitions there,” he said.

"Trampoline gymnastics has been developing in the country for three years, so it is early to expect medals from our gymnasts,” he added. “But it is a victory for us to see the spectators.”

“Azerbaijan's gymnast Ilya Grishunin has already won a medal at the European Games,” he said. “Today he has perfectly performed and qualified for the final. I hope that he will perform well tomorrow too. Grishunin will compete with Olympic champion and other athletes. We hope that he will win the competitions.”

“The synchronized competitions will be held in the evening,” he said. “Grishunin and other Azerbaijani gymnast Oleg Piunov will perform there and we hope that they will advance to the finals.”