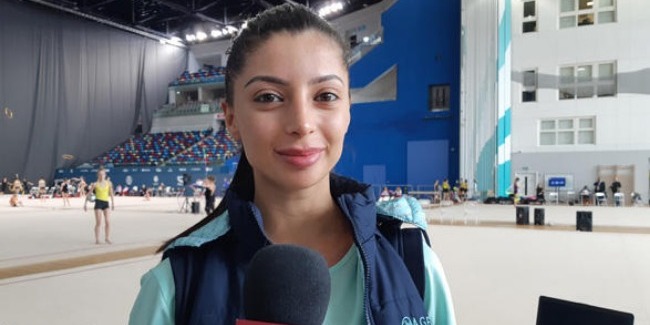 Azerbaijani gymnasts are ready to demonstrate good results at the upcoming AGF 2nd Junior Trophy in Rhythmic Gymnastics in Baku, as Jale Garatova, coach of the junior national team of Azerbaijan who prepares the gymnasts for group exercises, told Trend.

“We have been preparing for this start for two years now. We also have the European Championships and the Rhythmic Gymnastics World Championships ahead. This year the task has become more complicated, as the team prepares exercises not with one subject, but with two. At the AGF Junior Trophy, gymnasts will perform in exercises with 5 hoops and exercises with 5 ribbons. The girls work well with two objects and are ready to show good results both with ribbons and a hoop. The team is ready, and we will try to demonstrate all our skills and not let anyone down," Garatova said.

The coach noted that the support of the audience is very important for the gymnasts.

“The girls are coming to such a big arena for the first time. I would like the public to have a lot of support, as gymnasts pay attention to it. They like to perform, they like it when the audience roots for them, when there are a lot of viewers in the hall and all of them show support," she added.

The AGF 2nd Junior Trophy in Rhythmic Gymnastics will be held in Baku on April 20-21 in the National Gymnastics Arena. About 130 juniors from 20 countries will take part in the tournament.

Participants will compete in an individual program and in group exercises. During the two-day competition, winners will be determined in all-arounds and in specific types of exercises.