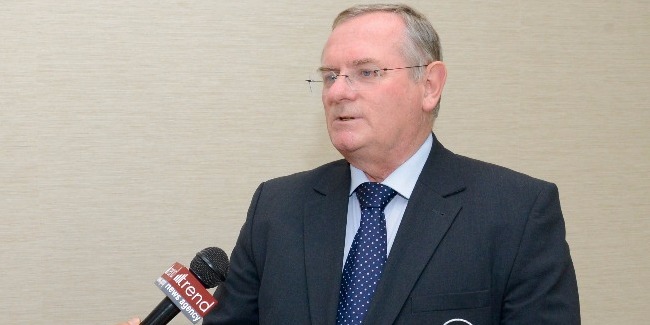 Baku’s “Milli Gimnastika Arenası (MGA, National Gymnastics Arena) is fully ready to host the European Championships in Trampoline, Tumbling and Double mini-trampoline in 2018,” Vladimir Zeman, the President of the Trampoline Gymnastics Technical Committee of the European Union of Gymnastics told to Trend in Baku on Friday.

According to him, the Arena in Baku is one of the best in Europe for hosting such a large scale competition.

“First of all, we came to Baku to see how the preparations for the competitions are going on, and also to hold the meetings of the Technical Committee within two days. I would say that MGA is one of the best facilities in Europe, as it is specialized in all gymnastics disciplines,” Mr. Zeman said.

According to the President of the Technical Committee, Baku also has a great experience in holding large scale competitions.

“Two years ago, the European Games were held in Baku at the highest level. In addition, Baku has already hosted two World Cups series in Trampoline Gymnastics, as well as World Cups in other gymnastic disciplines,” Mr. Zeman said.

Mr. Zeman stated that the arena has a capacity to host the World Trampoline Championships as well.

“This should be the next step. You have repeatedly hosted the World Cup series and the next year you will host the European Championships. Why not hold the World Championships? I believe that you are fully ready for this as well,” Mr. Zeman said.