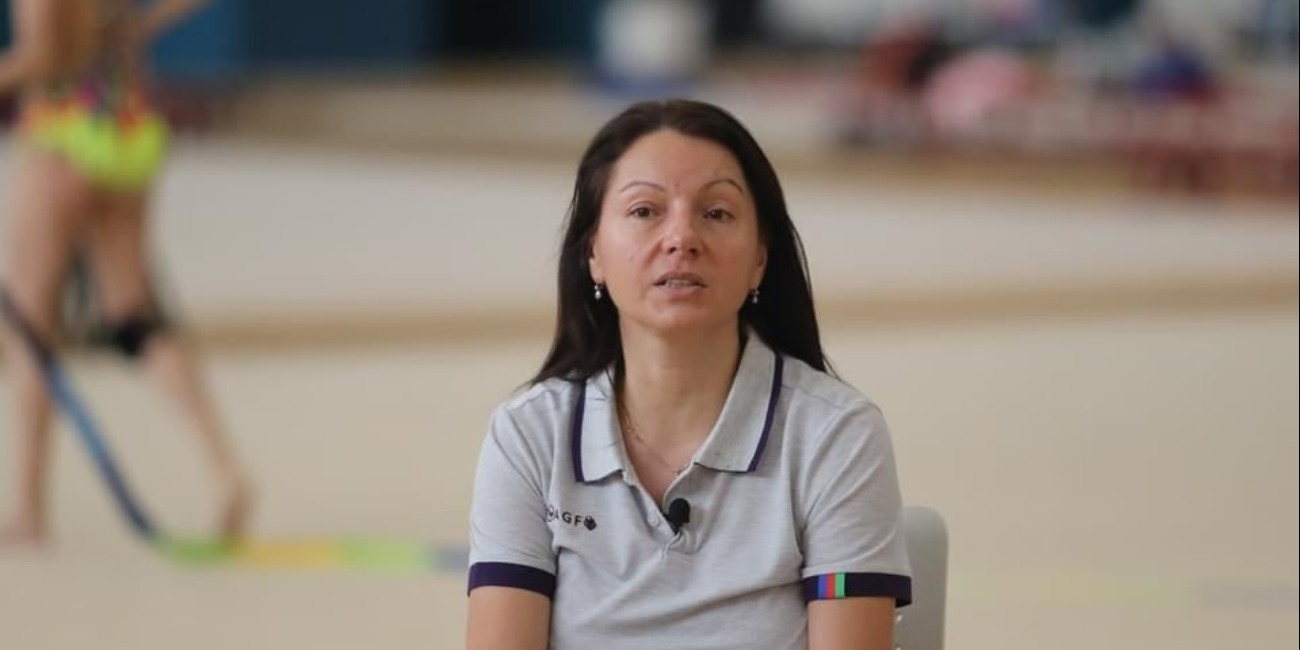 "Nine Azerbaijani gymnasts returned from the 36th European Rhythmic Gymnastics Championships which was held in Ukraine’s Kyiv city with medals," head coach of the AzerbaijaniRrhythmic gymnastics team Mariana Vasileva said in her interview with Trend commenting on the participation of the Azerbaijani national team in the competition.

The Azerbaijani team won three medals following the results of the European Championship. Thus, the team in group exercises won a silver medal in the all-around competitions and a bronze medal in the program with three hoops and two pairs of clubs. The Azerbaijani national team also won bronze in the championship among the teams. Azerbaijan was represented at the competition by 11 athletes.

Vasileva said after the 2019 Rhythmic Gymnastics World Championship in Baku, she decided to create a new team. "Zeynab Hummatova and Daria Sorokina were from the old team, but Sorokina previously performed only in one most important championship - the World Championship. The championship in Kyiv was the first one for all other girls. The competition in Kyiv was also the first championship for Arzu Jalilova performing in individual exercises among the senior gymnasts. People were impressed by her performance. Both Jalilova and the leader of our national team Zohra Aghamirova made mistakes. We will work on them."

I would also like to mention the performance of gymnasts performing in the category of juniors who returned with bronze medals. Among them are gymnasts from the country’s regions, namely, Leili Aghazade, Narmin Bayramova, and Ilona Zeynalova. They performed for the first time. Our gymnasts have gained good experience," Vasileva said.

Vasileva calls the 36th European Rhythmic Gymnastics Championships in Kyiv historic because the competition was held during the pandemic.

"This is the heroism of the European Gymnastics, which managed to host the European Championship. I also express gratitude to the organizers, they did their best to create favorable conditions for all delegations. I think that all the participants of the championship, regardless of whether they won medals or not, we're pleased. We needed this championship because it is very difficult for athletes and coaches to keep the bar when you have no goal. I think that this championship was extremely necessary," head coach noted.

The Azerbaijani national team made the fans of rhythmic gymnastics happy not only with graceful performances, a complex program but also with beautiful costumes. Thus, Azerbaijani gymnasts appeared on the carpet in Kyiv in plain gymnastics leotards without adornment.

"The idea appeared after the end of the 2019 World Championship, in which we won two licenses for the Olympic Games - in group exercises and an individual program. Then I began to think about how we must appear in the new season. I also really wanted to attract more fans because rhythmic gymnastics is beauty, grace, a synthesis of sports and art. I think that beauty must be shown in movements, rather than with the help of the glitter of stones. If athletes demonstrate a good level and idea of ​​exercises, they do not need the glitter of stones. Therefore, I decided that in the new season we use the classic style of gymnastics leotards, but then we have not chosen the color yet. Later we have chosen the black gymnastics leotards for the group team. This is connected with the mournful events. While defending the territorial integrity of the Motherland during the Armenia-Azerbaijan Nagorno-Karabakh conflict, Azerbaijani servicemen were killed. Azerbaijani civilians who became victims as a result of missile attacks were also among the dead. Many citizens of the country have lost their loved ones due to the pandemic that has swept across the world," Vasileva emphasized.