Ekaterina PANCHENKO: We come in Baku not only to train but also to learn 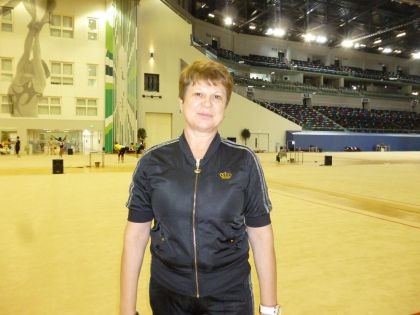 These days Kazakhstan national team in rhythmic gymnastics is in Baku where it is holding training camp practices at the National Gymnastics Arena. The team’s trainings are targeted for the major competitions, considering not only the September World Championships in Izmir, but also the Asian Games as well as the Youth Games in Nanjing. A Head Coach of Kazakhstan national team Ekaterina Panchenko shared her impressions of staying in our capital in her interview to azerisport.com.

In recent times, Kazakhstan’s team is often at the training camp practices in Baku. What are the goals and the objectives for this time?

“We come here with pleasure; therefore first, I would like to thank Azerbaijan Gymnastics Federation, as well as Mariana Vasileva, national team’s head coach as she assists in our team’s preparation. Certainly, conditions are nice, but the way you are treated, and the way they deal with the particular issues regarding training is very important. Now Azerbaijan is becoming a leading sports power, including rhythmic gymnastics along with Russia, Ukraine and Belarus. Baku hosted the European Championships at the highest level, and we congratulate your country on its success. Therefore, we come to Azerbaijan not only to train, but also to learn something. An additional advantage is the fact that we are able to train at the great National Gymnastics Arena.”

Which tournaments are you preparing for now, in other words, which Kazakh gymnasts are training in Baku?

“We brought here Elizaveta Maynovskaya, the 2014 Asian Champion who had qualified for the Youth Games. Now, we are working on her program, we make it a little bit complicated and will see the way she executes it in the China tournament. Aidan Sarybai and Selina Zhumataeva who will take part at the World Championships in Izmir are also here. They have just recently joined the seniors, so these athletes are our future.”

You have brought up a world star Aliya Yussupova who was shining in the international arena in the recent past. Is there anyone among the current generation of Kazakh athletes who is able to grow into the famous gymnast?

“Every child is different. At that age Yusuppova has distinguished by her physical abilities, character and set a very high level. Therefore, no one will repeat the way of the Alia, as well Anna Bessonova or Alina Kabaeva. I would like to draw your attention to your juniors who now keep up with the seniors and make a great progress. It is impossible to recreate second Aliya Yussupova, but there are promising girls. I think they will soon recommend themselves on the floor of the large-scale competitions.”

What is the minimum objective for the World Championships in Izmir?

“Honestly, we are more concentrated at the Asian Games, which are equivalent to the Olympics, than at the World Championships. In 2006 and 2010, we became the all-around champions in this tournament, so a proper preparation for the Asian Games is a primary task. The main starting point for us is the 2015 World Championships where the athletes will qualify for the Olympics, so the current World Championships are just another major competition for the team, especially if the difference between the two events is only a week. It is not so easy to show successful results at two competitions in a row, and, actually we do have such a purpose now.”

In recent years, a number of competitions hosted by Kazakhstan is increasing year by year: last year, there the World Boxing Championships were held and the World Championships in judo to be organized next year. Does the country plan to host some great gymnastics competitions?

“We plan to hold the World Cup in 2017. We also think to organize the Asian Championships as we have facilities meeting all international standards. We have already hosted similar events, so we are looking forward to welcome you in our country.”