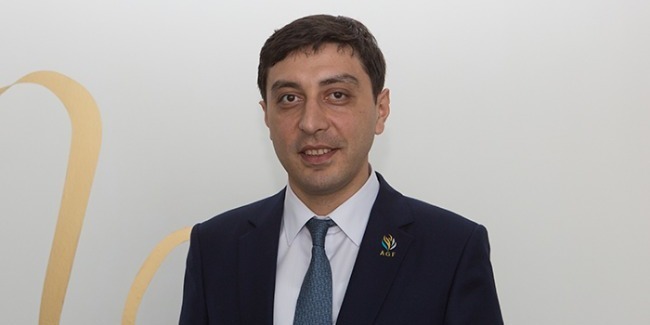 The European Union of Gymnastics (UEG) will work diligently on developing and popularizing gymnastics in all member countries, Farid Gayibov, UEG president, told Trend on April 14.

He also spoke about the organization and innovations of the European Championships in Trampoline, Double Mini-Trampoline and Tumbling in Baku.

"This is the first continental championship during my presidency of the UEG and it is taking place in Baku. That’s why I seem to have a double responsibility. I want the competitions to go well. The championship is organized by the Azerbaijan Gymnastics Federation, and you know that it always stands out by its way of holding tournaments and innovations,” said Gayibov.

He noted that one of the goals of UEG is the greater development of trampoline, since only 25 of 50 UEG members participate in the European Championship.

"Although this is a completely new kind of sport, there are no problems with the audience, people come and root for the teams. I would like to note that more than 200 tickets were sold to foreigners. This is a kind of sports tourism, mostly developed in football, but it is good that also in gymnastics. UEG honorary president Georges Guelzec, presidents of the French, Portuguese and Latvian federations came to the championship. There are many fans coming from Russia, as well as Western Europe. There is a great interest from foreign media." It's pleasant that the championship is popular, "Gayibov said.

He noted that it is more important to present gymnastics more actively on television."Jointly with its partners, SmartScoring company, UEG has created GymTV. In addition to streaming, live broadcast online, people can go to the website for free, watch competitions at home in good quality and get information about the results, start lists, etc. During the two days of the European Championship, the website was visited by 250,000 people. This is a very good figure. The partners have also made a good graphics for the introduction of athletes. We have agreed with the Russian Match TV on live broadcast of the finals tomorrow,” said Gaibov.

He pointed out that it is also necessary to attract the youth.

"Many young people watch the broadcasts. There are mostly young people in the stands. We organize special various entertainments for spectators to fill the pauses during competitions. This time we have invited professional mascots from the US. They entertain the spectators and participate in awarding ceremonies. There are also flashmobs and quizzes," said the UEG president.

Talking about the further development of gymnastics, Gayibov said that the executive committee is constantly discussing what changes are needed.

"With the help of our two partners, SmartScoring and the equipment provider, we are launching a program of assistance in the development of gymnastics for those European countries whose federations need financial and other assistance. It is necessary to think about changing the formats of holding competitions. In short, there is something to work on, and there is much work to do. We will diligently carry out this work,” he added.