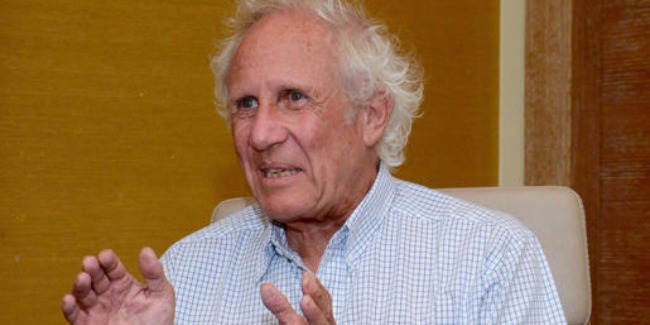 Azerbaijan showed incredible progress in the development of gymnastics, said Secretary General of the International Gymnastics Federation (FIG) Andre Gueisbuhler, who is in Baku to attend the FIG Executive Committee meeting, said in an interview with Trend.

According to FIG secretary general, the meetings of the executive committee are not as interesting as the European games or competitions organized by the FIG in Baku, like the three World Cups – in rhythmic gymnastics, artistic gymnastics and trampoline gymnastics – held in 2017.

However, for FIG this annual event of its legislative body is very important, since it represents, in fact, a small general assembly of gymnastic federations of the world, noted Gueisbuhler.

He added that members of the Executive Committee and 40 people from various countries, totaling about 60 participants, are taking part in its work.

The main task is to approve the changes adopted during the previous year and the budget for the next year, he added.

Meanwhile, everything related to technical issues is being put forward for discussions, particularly, all changes in the rules are accepted here, said the FIG secretary general.

“In total, we will stay in Baku for a week,” said Gueisbuhler adding that the renewed management of FIG wants changes and improvements in gymnastics, it has many ideas.

“But to change everything is not so simple. We have rules, most of which are effective throughout the Olympic cycle, and some can change every year. Here, in Baku, the Executive Committee will be engaged in long-term planning,” he added.

“Technical changes, which we will discuss at a meeting next year, will be planned. Structural changes that will change the structure of the FIG until 2021 will be discussed at the congress in 2018,” said the secretary general adding that a lot of interesting long-term discussions and decisions will take place in 2017.

The FIG Council meeting will start in Baku on May 6. As part of this, a meeting of the presidential commission was held on May 3, and the Executive Committee’s meetings will be held on May 4-5. More than 70 representatives of governing bodies of the Federation will take part in the FIG Council.

Gueisbuhler noted that he visited Baku for the first time in 2003, when the city was hosting the first World Cup in Rhythmic Gymnastics.

When FIG approved the holding of international competitions in Azerbaijan, it was stipulated that initially, three World Cups must be held in Baku, after which it will be allowed to organize the World Rhythmic Gymnastics Championship, said the secretary general.

“I was lucky that I came to Azerbaijan for three years in a row – in 2003-2005, as I could see from what the Azerbaijan Gymnastics Federation started, and now I can tell all about the path taken up until this day,” he added.

“Azerbaijan showed incredible progress and I don’t know any other country that has done so much within such a short period,” said Gueisbuhler.

He recalled that at the very beginning of the cooperation, FIG helped Azerbaijan with coaches, and provided other necessary assistance, showed how to organize the competitions.

“And today these investments in the Azerbaijani gymnastics are paying off,” noted the secretary general, adding that today Azerbaijan is already helping the whole world, organizing wonderful competitions at a high professional level.

“FIG becomes very pleased when Azerbaijan submits an application for holding the World Cups, we are very grateful for that. Many countries would like to organize competitions, but don’t have the opportunity due to the lack of necessary infrastructure, lack of finance or lack of necessary knowledge for holding international competitions,” he noted.

Azerbaijan has all of that, according to the FIG secretary general, the Azerbaijan Gymnastics Federation competently uses its vast experience and helps with this experience to the international community of gymnasts.

Gueisbuhler also expressed his attitude towards the nomination of the AGF Secretary General Farid Gaibov to the post of President of the European Gymnastics Union (UEG).

“As the FIG secretary general, I can’t comment on the elections, my position should be neutral, so that the international Federation doesn’t interfere in the work of the continental union. But I can say that Farid Gaibov is a good friend of mine, and a very competent leader. If he is elected, then I’m sure he will be a good president of UEG. I can’t add anything else,” said Gueisbuhler.

The FIG secretary general went on to say that Azerbaijan is doing a great job on promotion of gymnastics and attracting young people to this kind of sport.

He noted that what is being done by Azerbaijan today to attract people to sports clubs, including state investments and the wise policy of President Ilham Aliyev and First Vice-President Mehriban Aliyeva, is grandiose, because Azerbaijani children are happy to go to gymnastics and other sports.

“However, in 1991-1993, when Azerbaijan just gained independence, the situation was different, and we still sometimes encounter the fact that it is difficult for some countries to attract children to sports, not just to gymnastics,” said Gueisbuhler adding that nowadays children have so many opportunities, they are more interested in video games, and not in sports, and this is the problem of all people.

When a government conducts wise policy, and the national federation motivates children to start going into sports, then they develop, if not – they remain the same, or their situations worsens, concluded the FIG secretary general.