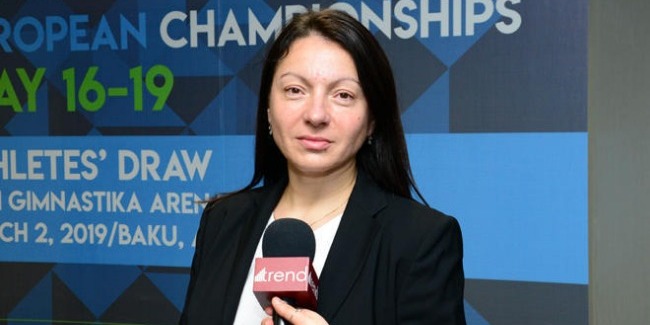 The Azerbaijani team has trained well and will succeed, head coach of the Azerbaijani national rhythmic gymnastics team Mariana Vasileva told Trend in Baku on April 26.

Vasileva made the remarks at the National Gymnastics Arena on the sidelines of the FIG Rhythmic Gymnastics World Cup.

“The international tournament, which we hold for the second year in a row, completed last week,” she said. “This was the Junior Trophy, in which the representatives of 20 countries participated. This is a huge number. We are glad that we have won six medals. This shows that our generation is going forward.”

“Of course, the greatest joy for me was that our girls continued to sing the anthem without instrumental accompaniment after they won the gold medal and the whole audience sang our anthem,” Vasileva said. “Tears filled my eyes. I was happy not so much because of the medal, but because of the solidarity.”

“All the public, volunteers, our coaches were happy that Azerbaijan won,” she said. “I wish to see this joy more often not only in gymnastics, but also in other kinds of sports."

Vasileva also spoke about the change of the main composition of the Azerbaijani team due to the injury of team leader Siyana Vasileva.

“We had an unpleasant incident,” she said. “Our team leader, Siyana Vasileva, had acute spinal cord injury during the training on Sunday morning. Therefore, unfortunately, she will be unable to perform at these competitions. It will take time to find other gymnast instead of her. Siyana is now being treated. We hope for her recovery and that she will be able to perform again.”

“This is sports and injury cases often occur,” Vasileva said. “It is a pity that Siyana was injured during such a moment. But it is better now than before such major competitions as the European Games and World Championships. But, on the other hand, we gave a chance to the gymnasts of the second composition to prove themselves. Our girls are very young. Of course, this is difficult for them. When they knew about their participation, they got worried.”

“But we are in our native country,” she said. “It is a good moment for them to get good experience. We do not expect them to show such a result which we expected from the gymnasts of the first composition. But the advantage is that they gain experience. The most important thing is that we have coped with this difficult situation.”

“We used to worry about how to replace one gymnast if something happens,” Vasileva said. “But now we show that we can replace the entire composition. I do not say that the level is absolutely the same, but they need time to show the results of such a level. There are a lot of technical issues. When the group performs, they need much time to be able to work together smoothly, feel each other and think like one.”