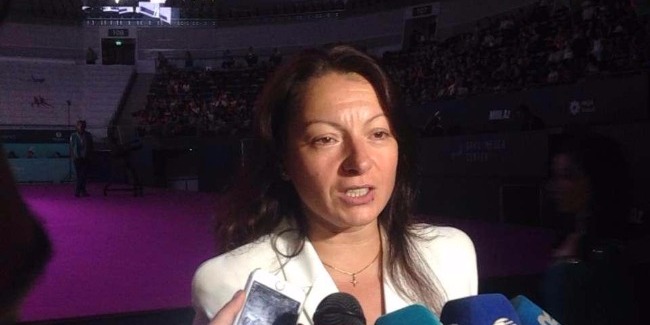 Head coach of Azerbaijani national team in rhythmic gymnastics Mariana Vasileva is satisfied with the performances of Azerbaijani athletes at the FIG World Cup Final in Rhythmic Gymnastics.

“Marina Durunda made us happy, albeit at the last minute as always. Unfortunately, it is turning into tradition. The same was observed during the First European Games in Baku and European Championships in Minsk. But the most important thing is that she made us happy,” Vasileva told Trend.

“Durunda made some mistakes, but it is better to make these mistakes here, rather than during the Olympic Games,” the head coach added.

Vasileva pointed out that she is also very satisfied with the performances of another Azerbaijani gymnast Zhala Piriyeva.

“I am very satisfied with Zhala’s performance, as she is a very young gymnast. We can say that it is her first performance in the senior program and she made me very glad with her three wonderful performances. She made a minor mistake during the fourth performance,” the head coach said.