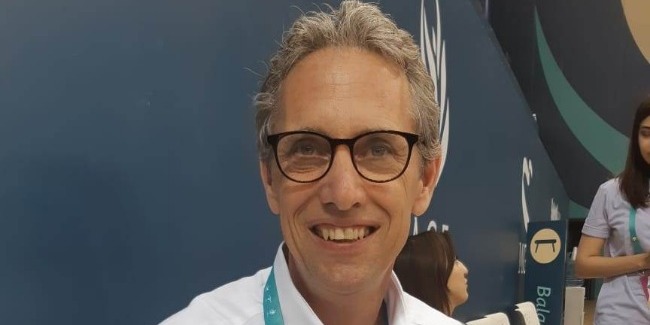 Baku created amazing facilities for gymnastics tournaments Baku, member of the technical committee of the FIG on mens gymnastics Jeffrey Thompson sain in an interview with Vestnik Kavkaza.

"The organization is fantastic, for sure. This is my first trip to Baku, and all of collegues have told me about how amazing facilities are here. And now that I see it, I understand why they talk so highly about it. It really is amazing," he said.

"To me it looks like almost perfect facilities for gymnastics, because all of the seats, the way stadium is built, it gives everyone a good view. Sometimes if you have a really large stadium some seats aren't that good, but here it looks like every seat is amazing," he noted.

Speaking about development of artistic gymnastics he said: "Since I've began working with the FIG I've been travelling to so many countries, I've seen incredible increase in the level, quality of gymnasts aroung the world. You can see that overall level is getting higher and higher, and it's happening everywhere. I think the FIG has done a very good job with their academies program in particular to bring up the level of gymnastics around the world."

Jeffrey Thompson said he hasn't seen Azerbaijani gymnasts this weekend yet, but he was impressed by them at the World Cup in Doha. "I was there with the FIG and thought "Wow, where did those guys came from?" They were really strong. And that point I didn't notice them too much, but they're improving at a very fast rate," he concluded.