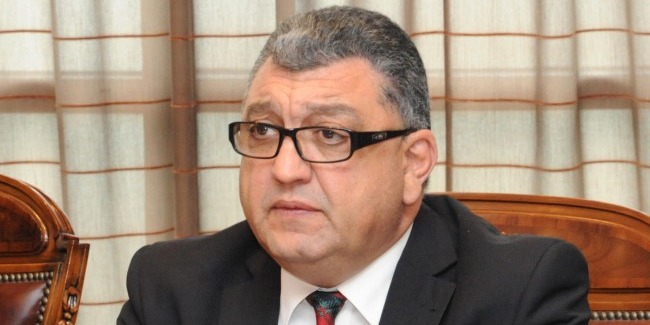 The achievements of the Azerbaijan Gymnastics Federation (AGF) have become possible thanks to the great attention and care of Azerbaijan’s First Vice President and AGF President Mehriban Aliyeva, Azerbaijani MP Rauf Aliyev told.

“We are glad that AGF once again ranked first in the list of federations awarded by the International Gymnastics Federation,” the MP added.

Azerbaijan has been holding this high position for the third year in a row, Aliyev said, adding that previously, AGF has always been in the top ten best federations in the world.

"Azerbaijani First Vice President Mehriban Aliyeva has been leading AGF since 2002. Since then, Azerbaijani gymnastics has greatly developed,” the MP said.

Aliyev pointed out that Azerbaijan annually hosts major international events, including European championships and World Cups. “As a result, AGF ranked first in the world.”

The MP said that today, all necessary conditions have been created for the development of gymnastics in Azerbaijan.

“The National Gymnastics Arena is the best arena in the world,” the MP said. “Gymnasts from all over the world come here to participate not only in competitions, but also in training camps. That is, the conditions here are at such a high level that gymnasts prefer Azerbaijan to other countries.”

The chairpersons of the federations, their deputies, the head coaches who come here during the World Cups and World Championships say that the conditions for holding competitions have been created at such a high level in Azerbaijan as nowhere else, Aliyev said.

The MP stressed that special attention is paid to the development of gymnastics in the Azerbaijani districts. He said that Azerbaijan has grown up its own national gymnasts.

“The gymnasts who have won licenses for the Tokyo 2020 Olympic Games also are our generation of gymnasts. All the necessary conditions for training have been created for these gymnasts since childhood, thanks to which they have reached such a high level,” MP said.

“AGF’s achievements have become possible thanks to the great attention and care of Azerbaijan’s First Vice President Mehriban Aliyeva," the MP added.

Azerbaijan Gymnastics Federation, which has been led by First Vice President Mehriban Aliyeva since 2002, has been recognized by FIG as the best in the world.

Ahead of other federations, AGF has been holding the leadership since 2019.

The achievement of AGF is unique, as the Azerbaijan Gymnastics Federation has been recognized as the best for the third time in a row. AGF consistently turned out to be among 10 strongest federations in 2014, 2015 and 2016, and ranked first in 2017 and 2018.

Azerbaijan Gymnastics Federation organized the World Cup in three types of gymnastics, the FIG Rhythmic Gymnastics World Championships, FIG Academy for Coaches in Men's Artistic Gymnastics, Trampoline Gymnastics and Tumbling, international competitions and other events at a high level in 2019.

AGF’s activity has been once again highly praised after being thoroughly registered in the competitions in seven types of gymnastic disciplines recognized by FIG.