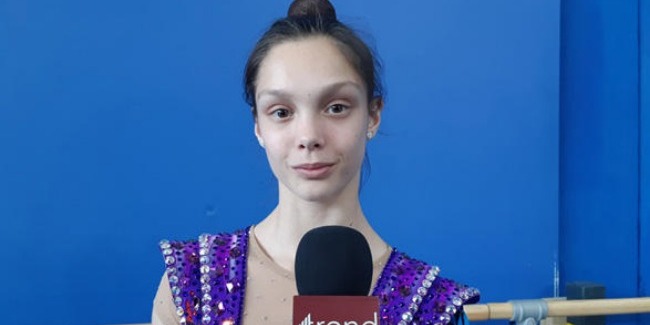 It is very comfortable to perform in the National Gymnastics Arena of Baku, Israeli gymnast Diana Svertsova participating in the AGF 2nd Junior Trophy in Rhythmic Gymnastics in Baku told Trend.

"The gymnastics arena in Baku is big and very beautiful. It is very comfortable to perform here. I have to admit that I feel a little nervous, since we will be performing in front of a huge audience," said the young athlete.

The gymnast, who will be performing in the group exercises program, was pleased with the results of the podium training session.

"Today we had a podium training session and it went well. Of course, there are always shortcomings. After the training, the coaches both praised us and pointed out our errors. The fact that we will perform two programs at the tournament including one exercise with five hoops and another one with five ribbons adds responsibility, but this also gives us the opportunity to show the skills we possess and acquire new ones," said Diana Svertsova.

The AGF 2nd Junior Trophy in Rhythmic Gymnastics will be held in Baku on April 20-21, 2019, in the National Gymnastics Arena. About 130 juniors from 20 countries will take part in the tournament.

Participants will compete in an individual program and in group exercises. During the two-day competition, winners will be identified in all-arounds and in specific types of exercises.