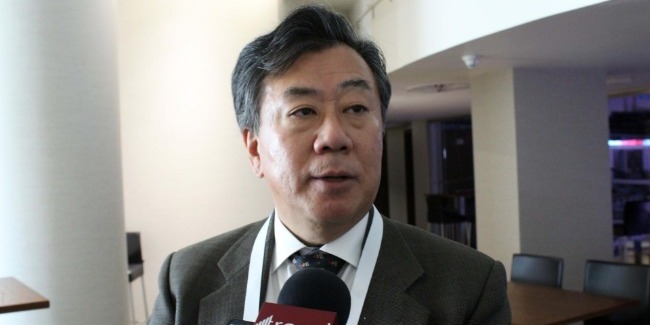 The Azerbaijan Gymnastics Federation does excellent work, Ambassador of the Republic of Korea to Azerbaijan Kim Tong Op told Trend on April 26.

The Ambassador made the remarks on the sidelines of the FIG Rhythmic Gymnastics World Cup in Baku.

“A couple of weeks ago I was here and was very impressed,” the Ambassador said. “This is the second time I visit this arena. Azerbaijan Gymnastics Federation work up to the highest standards. I expect that members of our team will show good results and they will have a good memory of Azerbaijan when they leave Baku.”

“The competition is very well organized,” he added. “We were very pleased to receive the invitation, and we enjoyed this event.”

The Ambassador said, “Bilateral relations between our countries have been developing very well. There are very promising prospects for development of cooperation in educational, cultural and sports spheres. Our embassy is doing its best to further develop this good status of bilateral relations. I think the cooperation in the sphere of sports brings very good results.”

The FIG Rhythmic Gymnastics World Cup, AGF Trophy kicked off at the National Gymnastics Arena in Baku on April 26.

More than 200 gymnasts from 39 countries are participating in the World Cup. During the event, 25 teams are competing in group exercises and more than 70 gymnasts are performing in individual programs.

The winners in all-round competitions will be named after the Individual Apparatus Finals (hoop, ball, clubs, ribbon) and Groups’ Apparatus Finals (five balls, three hoops and two pairs of clubs) and awarded on April 28.

The gymnast and the team in the group exercises with the highest score for the performance will be traditionally awarded with the AGF Trophy Cup.