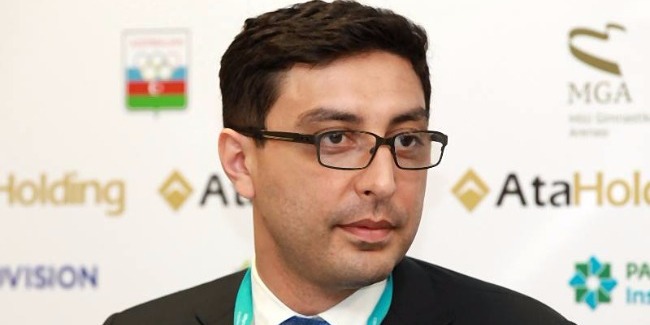 The Vice-president of the European Union of Gymnastics mentioned that gymnast Oleg Stepko became a five-time medalist and the only Azerbaijani athlete to win five awards at the Games during the Artistic Gymnastics competitions of the First European Games in Baku where one more medal was won in a team competition.

“So, this sport discipline had become more popular in our country and the leadership of Azerbaijan Gymnastics Federation decided to host the World Challenge Cup in Artistic Gymnastics. The World Cup series starting on February 19 will be the first one ever held in Azerbaijan in this sport discipline. We have organized such competitions only in Rhythmic Gymnastics so far. In addition, this World Cup opens a season of such tournaments,'' Gayibov said.

According to the Vice-president of the European Union of Gymnasts, athletes from 19 countries, which is a quite high number for this kind of events, will compete for the awards. At the same time, Farid Gayibov noted that not everyone is able to come to Baku. "This year is a difficult one, as the Olympic Games to take place in Rio de Janeiro in August. In addition, the Test Event for the Olympics will be held in April, and the European Championships will take place in May. The main point is that qualifications for the Olympic Games are not over and some athletes still have an opportunity to qualify in Rio in April. Moreover, February is the beginning of the season and not everybody is ready to compete,'' the General Secretary of Azerbaijan Gymnastics Federation explained.

“We are hosting such events for the first time, however, most likely, the competitions that we earlier held in Azerbaijan, especially the First European Games made us more popular. As a result, two famous athletes from Japan - World Champions, one of which is three-time World Champion Kenzo Shirai will come to Azerbaijan. Moreover, gymnasts from Brazil, Canada, i.e. from other continents rather than Europe, will also visit our country,” Gayibov noted.

“I think these events will be quite interesting for the Azerbaijani audience. People have an opportunity to watch the performances of famous athletes both in Men’s and Women’s Artistic Gymnastics.

Speaking about the plans of the Azerbaijani National Team at these competitions, Farid Gayibov first mentioned Oleg Stepko. "Last year, he won the medal of the World Championships on Parallel Bars and after the achievements at the First European Games he should preserve this level. Certainly, we count on him, people expect medals, and more than one,'' he said.

"And Stepko's team-mate Petro Pakhnyuk will try to do his best as well. He is also a quite strong gymnast and he is preparing for this tournament. Oleg Stepko has already qualified for the Olympic Games, and Petro has a chance for qualification in April," the Secretary General of the Azerbaijan Gymnastics Federation added.

Farid Gayibov further spoke about the competitions that Azerbaijan Gymnastics Federation intended to hold within the coming several years. Thus, the World Cup in Trampoline Gymnastics will take place for the first time in Baku on March 5-6. “We started to develop this gymnastics discipline two years ago but had already won a medal at the First European Games,” he said.

In addition, Azerbaijan will host a series of major events at Milli Gimnastika Arenası in the years to come, which allows hosting of such large-scale competitions. “Recently, the European Union of Gymnastics has decided to entrust Azerbaijan the organization of the 2018 Trampoline Gymnastics European Championships. Previously, the International Federation of Gymnastics made a decision to organize the Rhythmic Gymnastics World Championships in Azerbaijan in 2019,” Gayibov concluded.

It should be mentioned that the FIG World Challenge Cup in Artistic Gymnastics will be held on February 19-21 at Milli Gimnastika Arenası in Baku, which hosted 6 gymnastics disciplines during the First European Games. 46 men and 22 women gymnasts from 19 countries will compete for medals in Apparatus Finals of the World Challenge Cup. In general, 146 people will arrive in Baku within the delegation. Qualifications among both men and women on the first two days of the competitions to be followed by Apparatus Finals on the last day. Various contests and entertaining flash mobs will be organized for the spectators in the course of the event.