Vitaliy Ivanchuk: We are interested in developing of artistic gymnastics in Azerbaijan 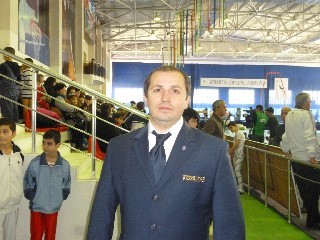 Joint Azerbaijan Championship in artistic gymnastics, acrobatics and tumbling is being hold at the Olympic complex of Shaghan settlement. The day before, there were defined the competitions' prize-winners in the first discipline, where a number of judges from the near and far abroad were involved in the assessment of exercises . A judge of the international level from Russia Vitaliy Ivanchuk was among them as well. He is also the head of Vladimir Gymnastics School , and, in an interview to azerisport.com, the guest shared his impression of what he seen in Baku, appraised artistic gymnastics development level in the republic and told about the prospective joint projects.

"Vitaliy, if we are not mistaken, this is your first visit to Baku, isn't it?"

"Yes, you are absolutely right. I have come here for the first time and was thrilled with what I saw here. I had been told that Baku was extremely beautiful city but the reality surpassed all my expectations. It is evident that the city is rapidly developing, buildings are constructed all over and the atmosphere itself is very nice."

"And what can you say about the championship?"

"There was a very interesting contest in the tournament and it discovered promising boys who had quite good inclinations to grow into big athletes. It is necessary not to stop at what has been accomplished and to make further progress."

"Taking into account that you are the head of Vladimir Gymnastics School, can we expect realization of joint projects with your colleagues from Azerbaijan?"

"We are discussing namely this issue in details right now. We are going to come to a joint cooperation agreement which also stipulates organization of training camps. So, the work in this direction is in progress."

"In your opinion, what is a peculiarity of gymnastics development in Russia and Azerbaijan?"

"We can say that gymnastics is a cult sport with rich traditions in our country but Azerbaijan has just began to put efforts into artistic gymnastics as well. And, I am sure you will overtake the leaders and we will witness an interesting competitive contest in foreseeable future. Moreover, we are also interested in gymnastics development in Azerbaijan and our mutual cooperation will favor it."

"Can the European Games-2015 in Baku, where gymnastics to be broadly presented, become a turning point in this respect?"

"I think these Games will give a new stimulus to sports development in Azerbaijan including gymnastics. I can say it, especially, after we have seen a beautiful gymnastics arena, which may become one of the best facilities not only in Europe but in the world as well. Your athletes are growing up and we can just wish you more coaching staff."

"And what are the peculiarities of training in men's and women's artistic gymnastics?"

"The girls develop themselves quicker but they get exhausted earlier. As to boys, there is a longer period of performances. However, you have to wait a little bit longer until they develop themselves, pass their transitional age, after which they work for a long time. As the saying goes, it is necessary to jump at the opportunity in this work."

"In your opinion, how long will a peculiar period of adaptation take for artistic gymnastics in Azerbaijan to win the international recognition? How long will it take for judges and experts to get used to the fact that our sportsmen can be able to achieve highest results?"

"Of course, a certain period of time is also needed for athletes to prove themselves, to go through some sort of test tournaments and find some stability. Then, everything will turn out well."