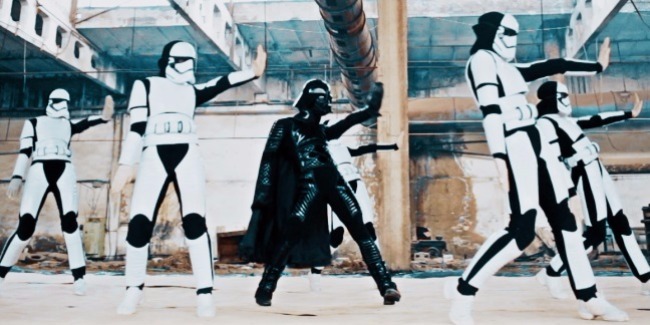 “Behind the scenes: The making of Azerbaijan’s Rhythmic Gymnastics-meets-Star Wars clip

A short time ago, in an abandoned warehouse far, far away, Azerbaijan’s Rhythmic Gymnastics Group spent a Saturday filming a video dressed as Stormtroopers from the Star Wars movies.

While videos exist of Stormtroopers doing other things -- the Harlem Shake, or the “Gangnam Style” dance -- Stormtroopers doing Rhythmic Gymnastics is novel enough that the clip has created a buzz, accumulating more than 70,000 views on the Federation’s Facebook page in two days.

“We are doing different promo videos and always trying to experiment with something new,” said Farid Gayibov, Secretary General of the Azerbaijan Gymnastics Federation. “The Star Wars films are very popular among the young generation, and for our gymnasts it was also an opportunity to show themselves and their sport in a different way. We hope it will attract more young people to Gymnastics.”

The Star Wars idea came from team manager Farhad Ahmadbayli, and was embraced by gymnasts Ayshan Bayramova, Zeynep Celep, Diana Doman, Aleksandra Platonova and Siyana Vasileva. It was shot in a single day, with gymnasts sporting Stormtrooper outfits and masks.

The video, published on the same day the Group won All-around silver at the Internationaux de Thiais in France, is now considered lucky for the team, Gayibov said. The next day, Azerbaijan won golds with the 5 Hoops and 3 Balls/2 Ropes.

“If any of them didn’t like the films before, they’ve changed their minds now for sure!” Gayibov laughed.

The Baku Rhythmic World Cup will be held in Azerbaijan’s capital April 28-30.”