10 GOLD, 5 SILVER AND 7 BRONZE MEDALS FROM THE TOURNAMENTS IN GREECE, BELGIUM AND POLAND 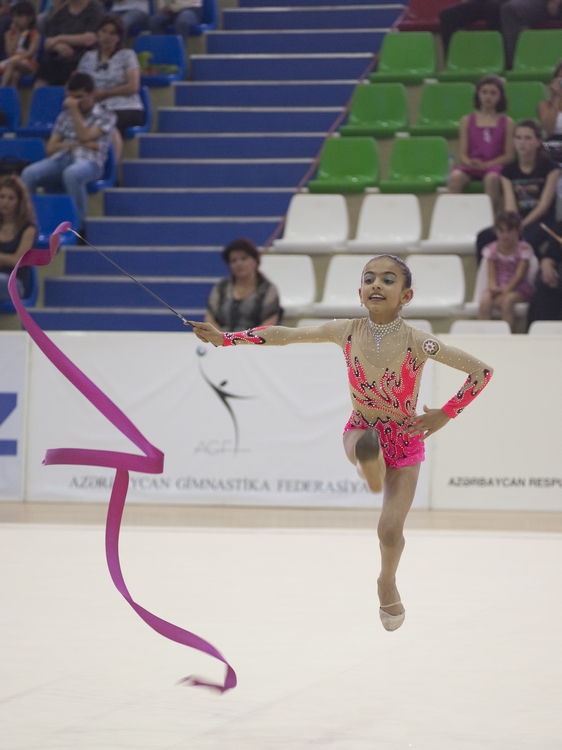 An Azerbaijani junior gymnast Laman Hajizada has become the all-around winner of the international tournament held in Greece.
The 12 year-old sportswoman received all three awards and winner’s wreath of olive branches as it was accustomed at the competitions held in ancient Hellas. It was not so difficult for the judges to define the owner of the first place after the exercises with a hoop, a ball, a ribbon and in the all-around. They unconditionally and deservedly gave it to the gymnast from Baku. It should be reminded that Hajizada had also become the all-around winner at the event in Israel three weeks ago.
Another three gold medals were won by Nilufar Niftaliyeva (born in 1998). She took the first places in the final with a ball and a ribbon, as well as in the all-around. The gymnast showed the second result with clubs, and the 3rd result with a hoop.
In addition, Yekaterina Prokopenko won the “silver” with a ribbon and 2 “bronzes” with a ball and in the all-around among the gymnasts born in 1997. Aynur Jabbarli achieved the same result in fact having taken the second place with a ball and the third one in the all-around.
The national anthem of Azerbaijan sounded not only in the tournament in the Balkans, but in the country-headquarter of many European organizations as well. The successful performance of a 14-year-old gymnast Mansura Bagiyeva with a hoop at the competitions in Belgium favored to it. Also performing there in the age group of sportswomen born in 1998, Gulsum Shafizada became the second with a ball and the third one with clubs, and Lala Yusifova (1996) showed the 3rd result with a ribbon and clubs.
And one more tournament where three young Azerbaijani gymnasts successfully established a reputation was held in Poland. Zarniyar Aliyeva became the best among the 7-year-old gymnasts, and Zohra Aghamirova had no equals in the age group of gymnasts born in 2001, and Bahar Asgarova (1997) won the silver medal.
As to the national team’s leader, Aliya Garayeva participated in the last round of the Italian “Serie A” Championship where her team Ritmica Piemonte took the sixth place as a result. Garayeva herself received 27.65 points for a ribbon, having shown the first results in the team and among the gymnasts performing with this apparatus.