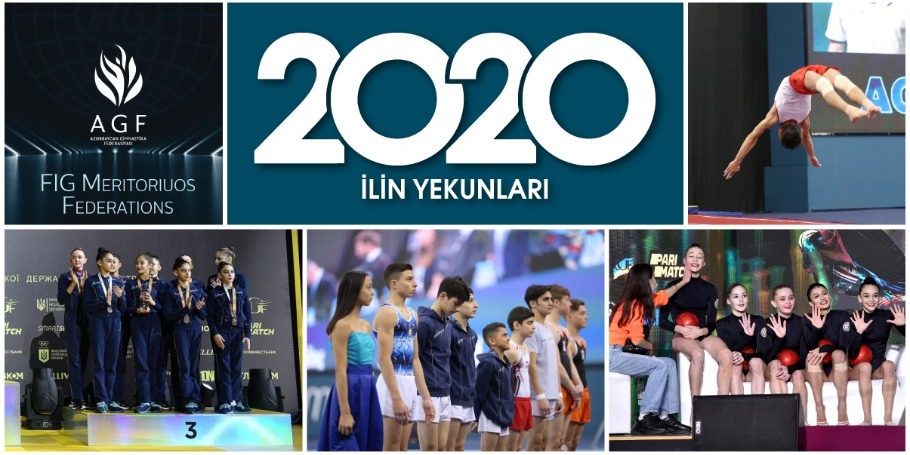 2020 has been remembered by unexpected occurrences for our country as it was all over the world.

The active work of Azerbaijan Gymnastics Federation (AGF) was highly valued by the International Gymnastics Federation (FIG) again. According to the results of 2019, AGF ranked 1st in the list of the “FIG Meritorious Federations” once again. It should be mentioned that AGF has been included into the FIG list of the 10 best federations for 6 consecutive years (2014, 2015, 2016, 2017, 2018, 2019), and led the list for the last three years. 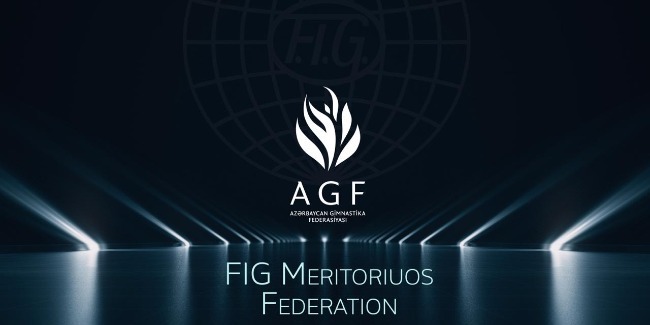 Although the year, we are seeing off, promised to be saturated with gymnastics events, many competitions have been cancelled or postponed due to the COVID-19 pandemic spread all over the world. Even the Olympic Games, which the whole sports community had been looking forward to, were postponed to next year.

The pandemic also affected the AGF activities. Thus, 1 international competition planned to be organized by the Federation was cancelled, 3 events, including the World Championships, were postponed, and 2 European Championships were moved from Baku to another host country.

Despite this unexpected situation, Milli Gimnastika Arenasi (National Gymnastics Arena, MGA) succeeded to host 3 competitions at the beginning of the year. First, the representative of Trampoline Gymnastics visited the country's capital for the World Cup qualifying for the Olympic Games. Afterwards, the junior Men's Artistic gymnasts competed in the 1st AGF Junior Trophy international tournament at MGA. The representatives of Azerbaijan managed to distinguish themselves at this competition and won 2 Silver and 1 Bronze medals. 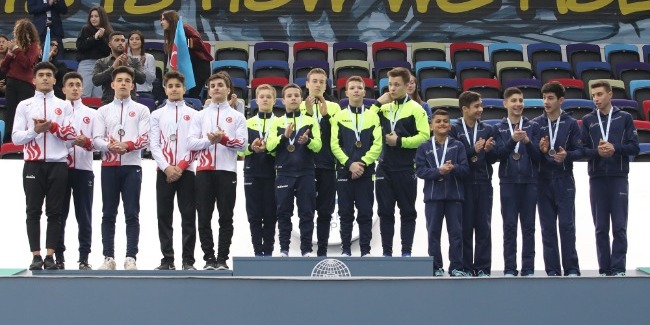 Another competition qualifying for the Olympics - Artistic Gymnastics World Cup was organized in our country. However, due to urgent preventive measures against the spread of coronavirus on the territory of Azerbaijan, the finals of this World Cup were cancelled. Our gymnast Marina Nekrasova won the Bronze medal in the events of Women’s Artistic Gymnastics, where the scores received by athletes in the Qualification were accepted as the final results by the FIG consequently. 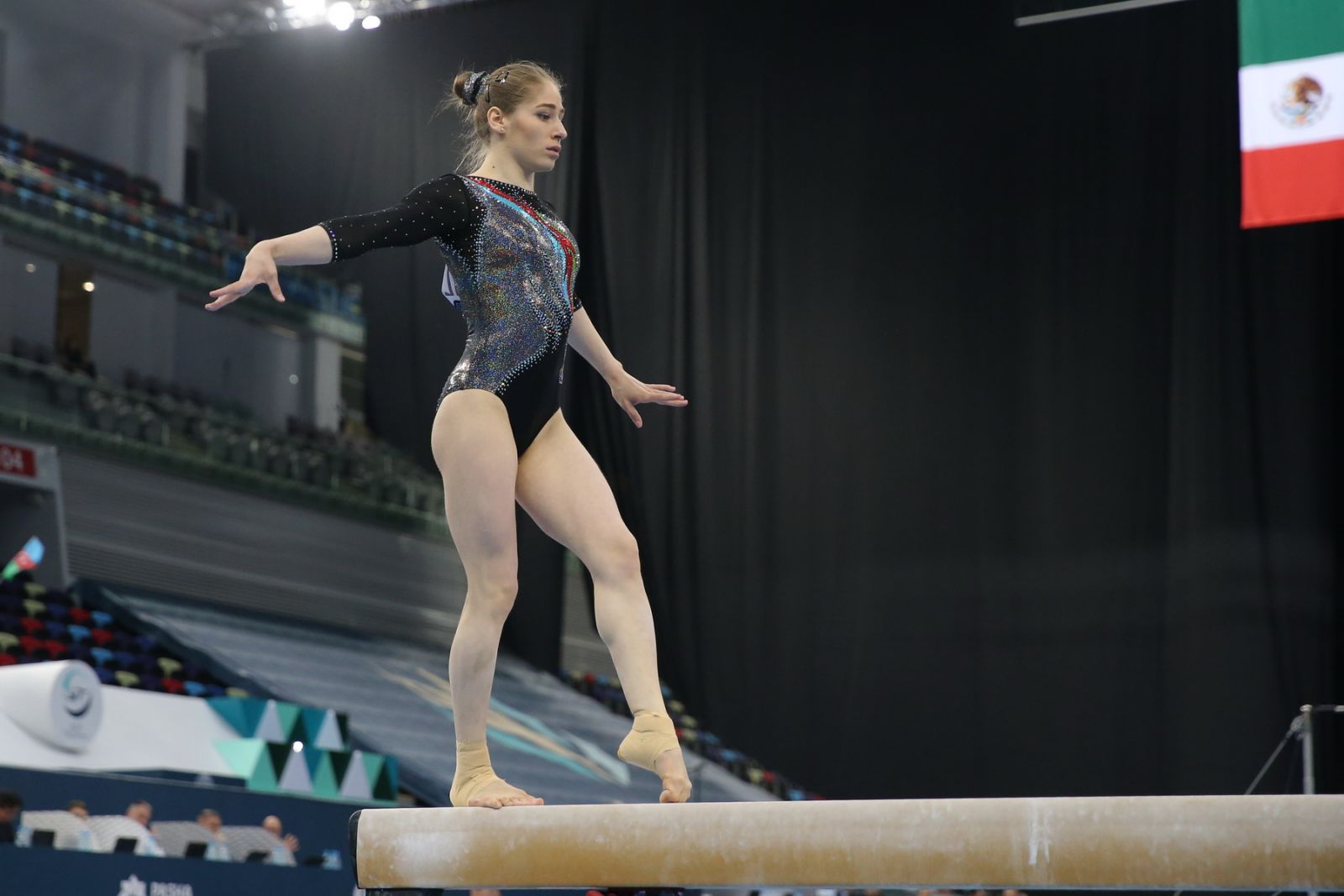 The most successful event for our gymnasts in 2020 was the participation in the Rhythmic Gymnastics European Championships in Ukraine. Our Rhythmic gymnasts had a triple success at this competition. Our team in group exercises consisting of Zeynab Hummatova, Darya Sorokina, Maryam Safarova, Laman Alimuradova and Yelyzaveta Luzan, won the “Silver” in the All-Around. This medal is the first one in history of the Azerbaijani Rhythmic Gymnastics won by our team in group exercises in the All-Around. 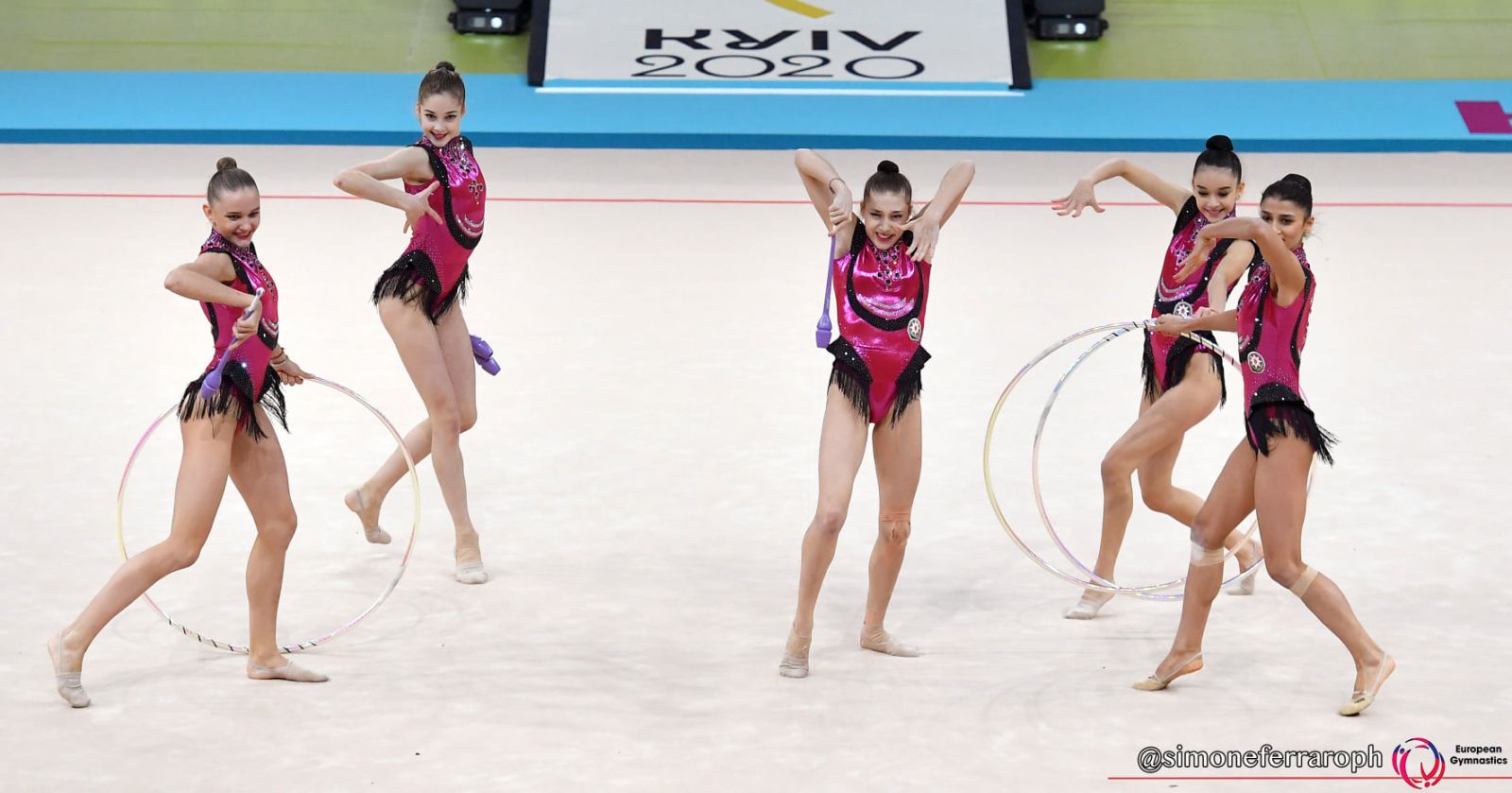 Another medal - "Bronze" was won by our talented team in group exercises in the final performance with 3 Hoops and 2 pairs of Clubs. One more medal was won in a Team Competition. According to the total score received by our team in group exercises and junior gymnasts (Narmin Bayramova, Alina Gozalova, Ilona Zeynalova, Leyli Aghazada), our National Team members were awarded with the Bronze medal in the Team Competition. 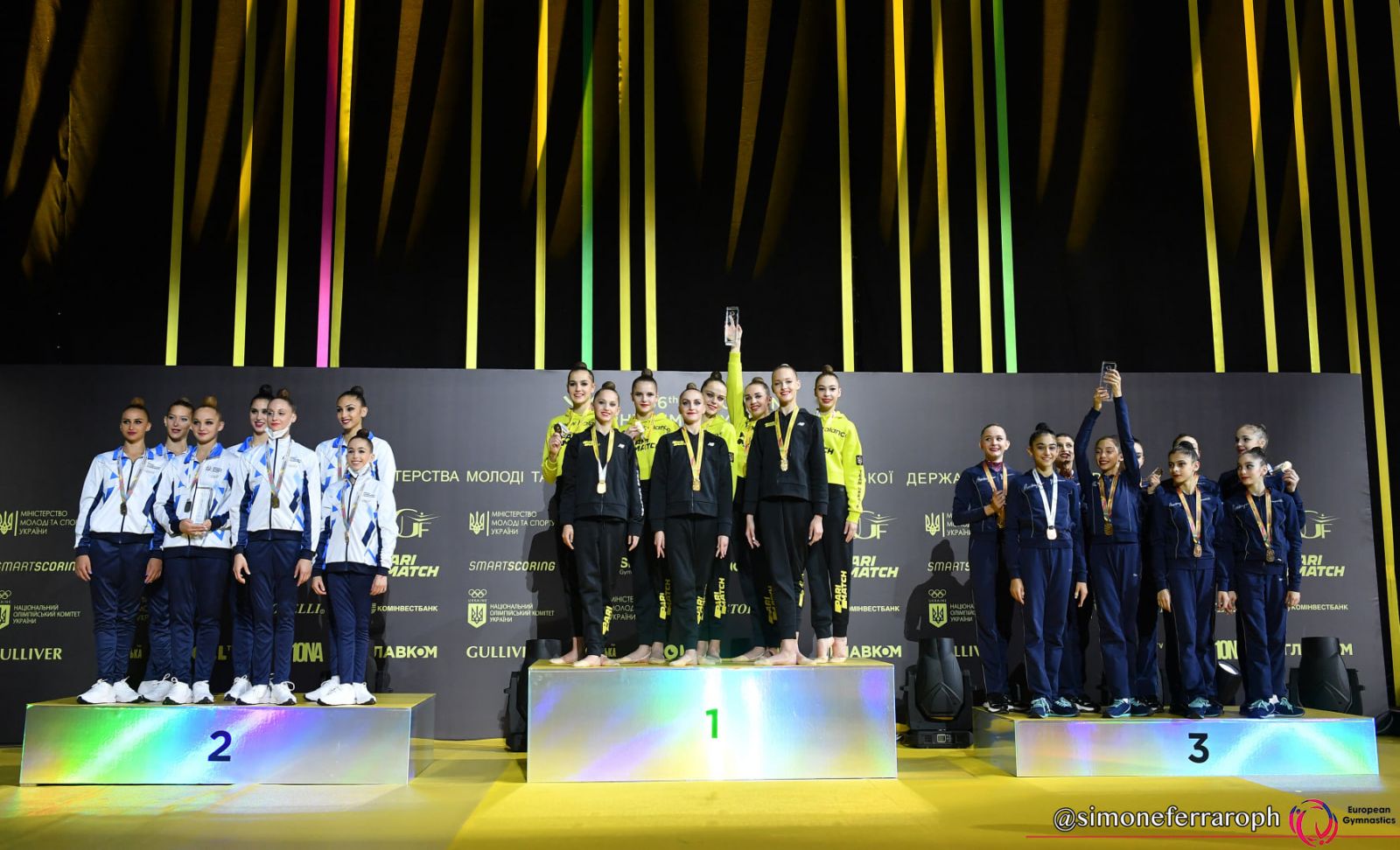 The leotards worn by our National Team members during their performances at the Championships were in the limelight of fans, gymnastics experts, as well as the world media, and were widely discussed on social media for a long time. 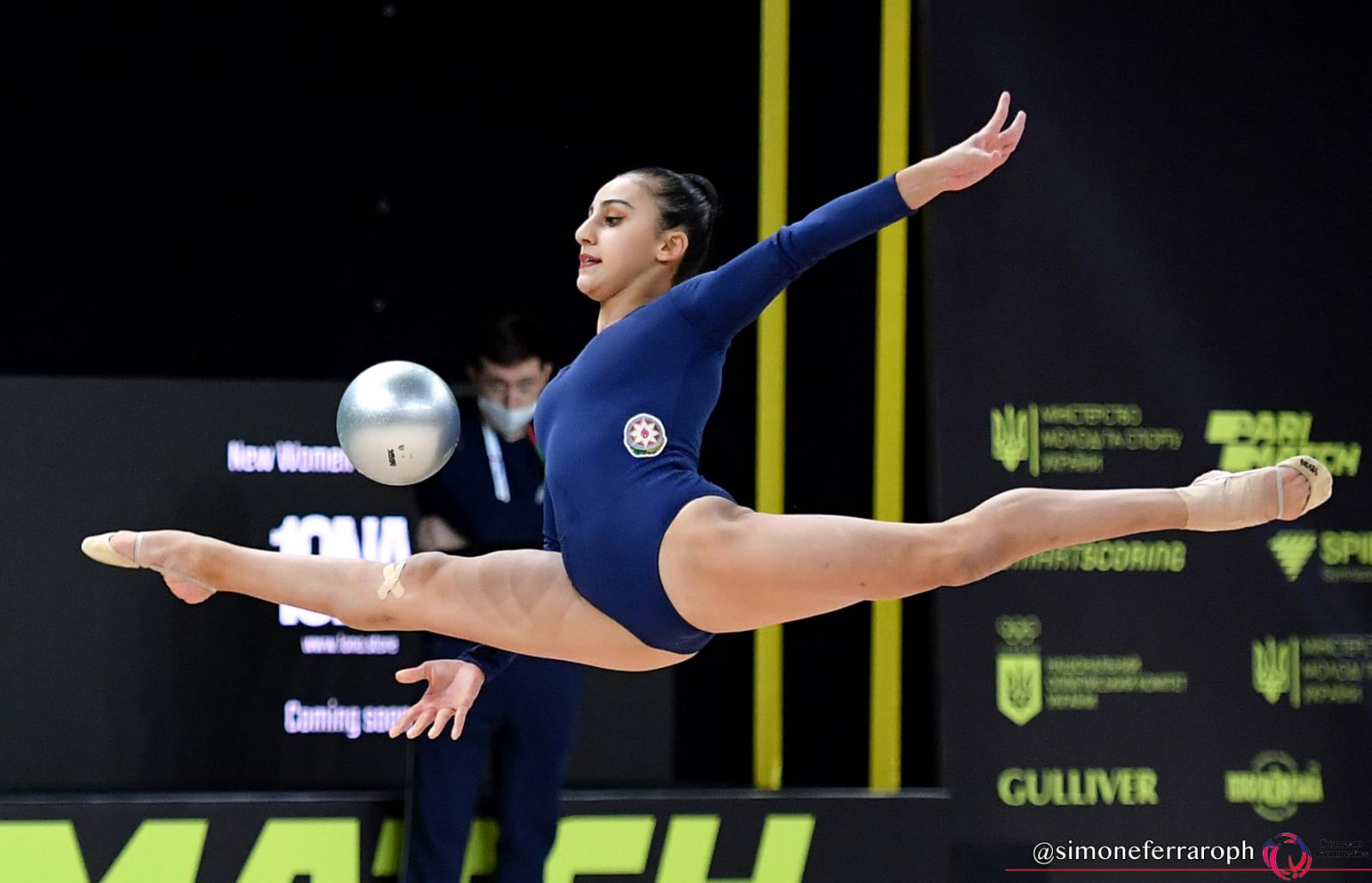 Since March, quarantine has been introduced in Azerbaijan, as in many countries. During the quarantine period, along with a number of mass gathering events, sports competitions, including training at gyms, were prohibited. However, during the quarantine period, the population was advised to be engaged in sports and be physically active in order to build up health, strengthen immune system and maintain good health. Consequently, AGF has also implemented a number of projects. Morning gymnastics exercises were daily presented by professional coaches for people to exercise comfortably at home and posted on the federation's social media accounts to make it available for everyone. Moreover, morning gymnastics was presented to the public on television within the framework of cooperation with the local TV channel. AGF also periodically makes educational videos and shares them on its social media accounts to help the population to maintain health by doing gymnastics in the proper manner.

Although the gyms were closed during the quarantine, our gymnasts continued to train at home. The coaches and choreographers who worked with our gymnasts monitored their trainings and regularly gave their advices on how to maintain their physical form during training at home. Having taken part in online competitions, gymnasts also succeeded to be among the prize-winners.

During the online trainings at home, gymnasts participated in a number of interesting and entertaining online competitions and challenges. They also displayed creative initiatives themselves.

There were organized online master classes for foreign gymnasts in the quarantine period as well. Such trainings were conducted by coaches and choreographers, as well as by gymnasts of the Rhythmic Gymnastics National Team. Representatives of Poland, Slovakia, Latvia, India, Egypt, Brazil, Montenegro, Mexico, Argentina, the Philippines and a number of other countries benefited from these master classes.

During this period, the first very interesting joint online competition of the Rhythmic Gymnastics National Teams of Azerbaijan and Israel also took place. The teams qualified for the Tokyo-2020 Olympics from both countries took part in the event called "Battle". The purpose of the competition was to experience the competition spirit at quarantine period and to have fun together, even online, when there are no gymnastics competitions.

This year, as always, AGF has focused on improving the skills of coaches and judges. Thus, at the beginning of the year, courses in gymnastics disciplines were organized for local judges and coaches.

In addition, The Azerbaijani “TeamGym” judges upgraded their European Brevet. Our representatives Inara Israfilbayova and Akif Karimli, who passed the online judging exams in this gymnastics discipline in late July, obtained the 3rd judges’ Brevet. 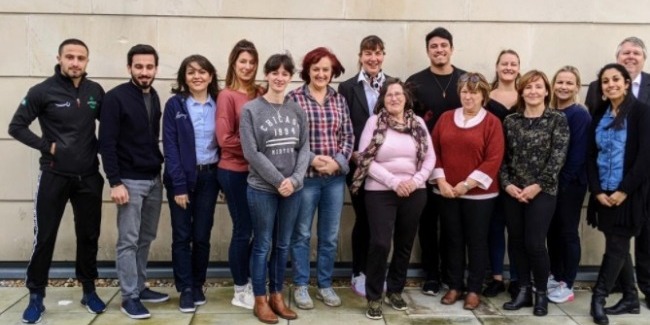 An introductory webinar in Gymnastics for All was organized by Azerbaijan Gymnastics Federation (AGF) for the first time this year. A total of 84 people registered to participate in the webinar, which aroused great interest in gymnastics specialists and those who wished to get acquainted themselves with this discipline. Among the participants, there were representatives from almost all cities and regions of the country - Gakh, Zagatala, Balakan, Gusar, Shirvan, Ganja, Lankaran, Mingachevir, Nakhchivan and etc.

The year, we are seeing off, was a quite different year for Azerbaijan, as for all countries of the world. Despite some limitations and challenges, this year we also tested new things and gained new skills. A new year, saturated with major gymnastic events, awaits us. Therefore, we wish everyone sound health, success in their work and stay with us next year!