A step away from the direct Olympic qualification 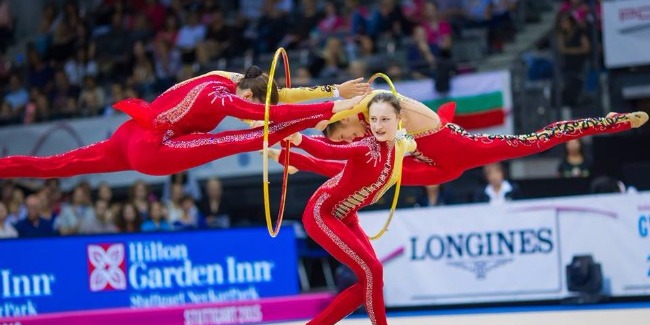 An Azerbaijani team in group exercises has performed at the Rhythmic Gymnastics World Championships held in Stuttgart (Germany).

The group consisting of Sabina Abbasova, Siyana Vasileva, Aynur Mustafayeva, Diana Doman and Aliaksandra Platonova had successfully demonstrated their stirring exercise with 3 pairs of clubs and 2 hoops at first.

Unfortunately, having made a mistake in an exercise with 5 ribbons, the girls lost their first opportunity to qualify for the Rio 2016 Olympic Games in total of 2 exercises.

According to the Rules of the qualification system, the competitions of the Pre-Olympic Test Event to be held in Rio de Janeiro on April 16-24 next year, give the second chance to qualify for the Olympiad 2016.

As per results of the all-around of the World Championships, the Azerbaijani team acquired a right to compete in the Second Olympic Qualification – Test Event.

These World Championships also remained in the girls memory with a sudden surprise caught them in the center of the city where they were walking before coming back to homeland. After the telephone call informing them of the fact that the Spanish team withdrew from the final with 3 pairs of clubs and 2 hoops due to the injury of one of the gymnasts in an exercise with ribbons, they, being the first reserve, took a taxi and rushed into the Porsche Arena.

Having demonstrated a real sportsmanship, after leaving the taxi, our gymnasts literally appeared on the floor straight away. Their performance closing the eight of finalists turned out to be the World Championships’ last routine.