A WONDERFUL GYMNASTICS FESTIVAL : “THE SCHEHERAZADE’S MOST BEAUTIFUL STORY” IS TOLD IN BAKU 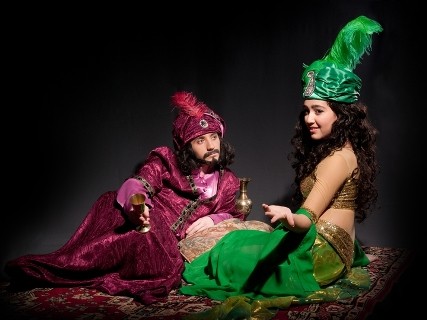 A heroine of the “One Thousand and One Nights”, Scheherazade, continues to excite the minds of people who are found of all the beautiful and magic things regardless of their age in the course of many centuries. This splendid oriental tale were put on a performance in various counties and in very different genres, and, who could have imagined that its most magnificent personification would become the show performed by the national team’s gymnasts at Baku Olympic Sports Complex. They have plunged the audience into the wonderful magic world of the East having presented Gala-show called “The Scheherazade’s most beautiful tale” on the threshold of New Year.

The Gala-show was devoted to the 10th Anniversary of reestablishment of Azerbaijan Gymnastics Federation. On behalf of all its participants, there was expressed gratitude to the Federation’s President Mrs Mehriban Aliyeva for her inestimable contribution to our sportswomen’s successes who repeatedly made us happy with their prize-winning places at the events of the highest level.

A number of parked cars suggested that the complex would be overcrowded. Parents with small children were going towards the complex’s entrance in an endless stream unbuttoning their coats and taking their caps off as they were in a great hurry. Of course, they were – there was a tale waiting for them inside.

High spirits reigned inside the complex as well. The first floor was decorated with a Christmas tree, toys and balloons. Everywhere, kids were running about with the balloons in their hands ignoring their parents’ strict shouts.

When there were few minutes left till the beginning of the show, the spectators were asked to take their seats.

It should be mentioned that the decoration drew the attention at once. The stage was adorned in an oriental style, color combinations had been chosen perfectly. The decorations divided it into three parts: eastern city’s corner, drawing room and the sultan’s chamber.

The presenter had scarcely announced the beginning of the New Year ball when the lights mysteriously went out in the hall, and, then went on suddenly and the spectators saw the sultan himself (Kamil Guliyev, the national team’s choreographer) sitting on his throne. Music started to play and the gymnasts having run out into the floor performed an inflammatory Arabic dance. Following the charming dance, a jester (national team’s gymnast Ayshan Bayramova) appeared on the floor and invited the sultan to listen to the tale and his majesty agreed. And this very moment, Scheherazade, performed by the team’s gymnast Fatima Shafizada, appeared from the darkness. Having indulged the sultan with her beautiful dance, Scheherazade took a seat beside him and began to narrate a tale which was listened to both by the ruler and audience with sincere interest.

At first, the tale was about four elements: Earth, Water, Air and Fire. The gymnasts and acrobats, executing walkovers, somersaults, splits, handstands, took their turns on the stage one by one. All the complicated movements were implemented so easily, that many people gasped with surprise. Among the gymnasts, there were members of both junior and senior group teams. Regardless of their age, everyone performing enraptured the audience. Rhythmic melodies gave place to lyric ones.

A gymnast Marina Durunda’s each performance filled with emotions, feelings, expression even compelled children’s attention, the parents of which cheered her. Performances of Lala Yusifova, Mansura Bagiyeva and Aysha Mustafayeva were gorgeous as well. But the greatest enlivening among the spectators was observed during the performance of Mariana Vasileva, the rhythmic gymnastics national team’s head coach, who demonstrated an incredible flexibility and grace.

As it turned out, the national team’s coaches, choreographers also performed at the Gala along with young gymnasts who tried to keep up with their tutors. The gymnasts’ plastic movements were in harmony with melody and rhythm and their artistry deserved the most enthusiastic epithets. Young sportswomen were executing the complicated exercises so easily that it took the breath away and everybody was amazed at how professionally they reigned over their body. And none of them gave the audience to understand that all these achievements had been possible due to the titanic work – the girls were performing with such an ease, smile as if they were sharing their delight with the people gathered.

A gymnast in a shining suit appeared on the floor to the animated cheerful music together with little “poodles” acted by small gymnasts attired in variegated fluffy suits. Their performances amused the spectators very much and they continuously applauded them.

A plot of the performance is very interesting – in the course of the whole Gala, there was a struggle between the witch and princess who succeeded in releasing herself from her fetters having shown the force of four elements. These scenes were performed so artistically and emotionally that the spectators with a sinking heart were waiting who would win in the end. And like any tale, the good won a victory over the evil. While the good was triumphing, the audience could not control their emotions and burst into cheering and applause.

In final, gymnasts dressed in national costumes appeared on the floor and performed an Azerbaijani dance. The audience applauded in the standing position and did not want to let the national team’s gymnasts to leave the stage.

In spite of being in a hurry, the head coach of the Azerbaijani rhythmic gymnastics national team, Mariana Vasileva, found a minute to say a few words to Day.Az upon completion of the festive Gala. By the way, Vasileva is an author of this splendid New Year show’s scenario herself.

“Everybody knows that Scheherazade charmed the sultan with her interesting stories. Our federation has been operating for ten years and we can also call it the beginning of a new tale. But we have made it up ourselves and our scenario was not in line with Scheherazade’s story. Our mystery lied namely in it. The audience saw a new tale performed by national gymnasts,” Mariana Vasileva said laughing and hurried to see her gymnasts.

The Organizers of the show presented to their small spectators special New Year’s gifts which made them glad.

The festival of tale, grace and beauty turned out to be very successful.