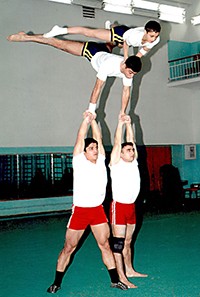 Azerbaijani acrobats became the winners of the international tournament called “Stars above the Bug-2008” held in Ukrainian Vinnitsa.
According to the press-service of Azerbaijan Gymnastics Federation, a man’s group, consisting of Rustam Najafguliyev, Elnur Mammadov, Ilham Abbasov and Farid Mammadov, also taking the lead over the main team of Russia, splendidly performed in the final of the competition.
Our woman’s pair Ayla Akhmadova – Dilara Sultanova won medals as well. Having won bronze medals after the final performance, the pair also showed up on the podium.
The country’s gymnasts also won their first medals in the current season. An Azerbaijani team in group exercises, which spent the whole month in the training camp in Bulgaria, showed his rivals in “Miss Valentine” tournament that trainings at world-known “Levski” club were not wasted. Mariana Vasileva, the group’s coach, was satisfied with the result of the all-around (31.73 points) – bronze medals – especially if to take into account that Ukrainian team, which became the second, took only 0.05 points lead over our collective. The first place was taken by Russia.
As to the individual gymnasts, Anna Gurbanova took the 5th place having received 62.98 points in the total, and Zeynab Javadli took the 13th place (56 points) among 32 participants. An absolute champion from Ukraine Anna Bessonova was given the honor of becoming of “Miss Valentine”. Another Ukrainian gymnast Natalya Godunko took the second place, the third place – Irina Kikkas from Estonia, the fourth place – Aleksandra Yermakova from Russia.
In the juniors’ competition, Nigar Abdusalimova became the 16th with a rope (21 points), and Sabina Abbasova became the 19th with a hoop (20.03) among 42 rivals.
At the end of this week, the first lap of Grand Prix series, where Aliya Garayeva will take part, to be held in Moscow on March 1-2. The 15th Open Azerbaijan Championship in Rhythmic Gymnastics will start at the Olympic Sports Complex three days later. It’s expected that rhythmic gymnasts from Russia, Georgia, Kazakhstan and Uzbekistan will also perform in the tournament together with our leading gymnasts.