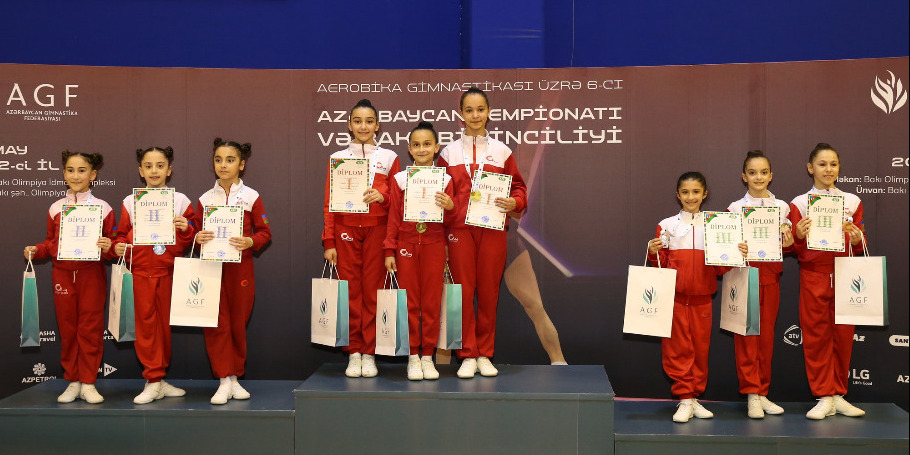 This time, the strongest Aerobic gymnasts of the country gathered at Baku Olympic Sports Complex. 80 gymnasts from “Ojag” Sport Club, “Zirva” Sports Club, “Grasiya” Sports Club and Sumgait Olympic Sports Complex competed for medals at the 6th Azerbaijan and Baku Championships in Aerobic Gymnastics among Age Categories held on May 25.
At the Baku Championship, athletes took part in the Age Categories of youngsters (born in 2014-2015), children (born in 2011-2013), pre-juniors (born in 2008-2010) and juniors (born in 2005-2007), while pre-juniors (born in 2008-2010), juniors (born in 2005-2007) and seniors (born in 2004 and older) performed at the Azerbaijan Championship.
According to the relevant Age Categories, gymnasts competed in the Individual program within Mixed Pairs, Trios and Groups.
Spectators gathered in the hall and watched the gymnasts’ performances with great interest and excitement. This atmosphere in the complex also had a positive effect on the performances of athletes.
Aerobic Gymnastics that has been developing in our country since late 2013, has become one of the favorite and popular sport discipline in Azerbaijan in recent years.
It should be mentioned that in 2019, Azerbaijan hosted the 11th Aerobic Gymnastics European Championships and in 2021 – the 16th World Championships & the 9th World Age Group Competitions in Acrobatic Gymnastics.
Another major event awaits our junior and senior gymnasts in June. There will be held the World Championships and the World Age Group Competitions in Portugal.
The detailed information about the results of the competition is available at www.agf.az