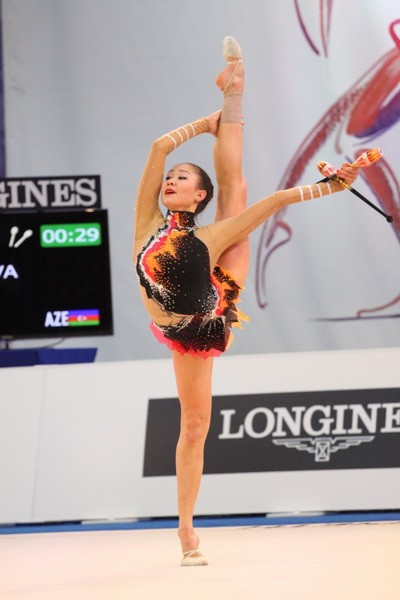 An Azerbaijani gymnast Aliya Garayeva has taken the third place and won the bronze medal in the all-around final at the European Rhythmic Gymnastics Championships held in Nizhny Novgorod!

In the program included into the Olympic discipline, she received 114.85 points and mounted the European podium together with Russian leaders, Yevgeniya Kanayeva and Aleksandra Merkulova.

It is already the second award won by Garayeva in the all-around final of the European Championships. Aliya scored such a success first at Euro-2010 in Bremen.

It should be reminded that Aliya Garayeva is also the bronze medalist in the all-around from the last year’s World Championships held in France.

Juniors were the first who appeared on the floor of the Trade Unions’ Sports Palace. They presented exercises with a hoop and a ball to the audience and judges. A 15-year-old Azerbaijani gymnast Marina Durunda performed with a ball, and, having received 26.3 points, she took the third position in the qualification with the given apparatus.

Another gymnast from Baku Nilufar Niftaliyeva (born in 1998) showed the 4th result in the qualification with a hoop – 25.85 points.

Azerbaijani gymnasts presented their exercises with clubs and a ribbon. Neither numerous fans nor the judges could remain indifferent to a 14-year-old Gulsum Shafizada’s stirring dance with a ribbon. As a result – she received 26.075 points and qualified for the final!

Our juniors’ last combination with clubs executed by Nilufar Niftaliyeva summed up the team competition results. 24.075 points – are not the highest ones but they were sufficient to reach the final.

Azerbaijani gymnast Nilufar Niftaliyeva demonstrated a successful performance. She became the third in the final exercise with a hoop. The first place was won by Russian and the second one by Belarusian representatives accordingly.

Nilufar Niftaliyeva’s “bronze” was next medal in turn of the Azerbaijani team at Euro-2012.

At the event’s final day, Azerbaijani gymnasts took two medals at once. Junior gymnast Gulsum Shafizada won the “bronze” in the final exercise with a ribbon.