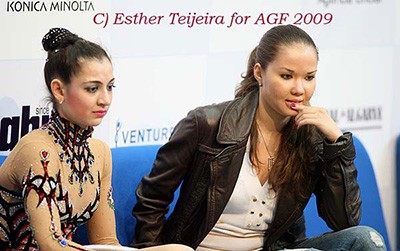 A leader of Azerbaijan rhythmic gymnastics Aliya Garayeva has won the bronze medal in the World Cup series held in Portimao, Portugal.

According to the press service of Azerbaijan Gymnastics Federation, Garayeva demonstrated her best final performance with a rope and received high - 26.275 points. Only an Olympic champion Yevgeniya Kanayeva from Russia and present champion of the world Anna Bessonova from Ukraine took the lead over Aliya.

In other finals – with a ribbon and a hoop, Garayeva took the 8th and 9th places, and the 12th place in the all-around.

The country’s other gymnasts taking part in this tournament, Anna Gurbanova and Samira Mustafayeva took the 14th and 30th places in the all-around among 49 competitors accordingly.

An Azerbaijani senior group team stopped a step away from eight finalists taking 9th places (45.05 points) in both performances – with 5 hoops and 3 ribbons / 2 ropes. It was the team’s first performance after the insertion of new rules followed the last year’s Olympiad and with the group’s changed composition. Having won the first place in a combined exercise, the Japanese team presented a real sensation in the competition among groups.

Junior group teams’ tournament was also being held concurrently with the World Cup series. An Azerbaijani collective could reach the final passing through the qualification sieve, and, as a result, took the 7th place with 20.8 points for the exercise with 5 ribbons. The first three prize-winning places were taken by the teams of Russia, Belarus and Bulgaria.