Artistic gymnasts return with medals from the international tournament in Russia 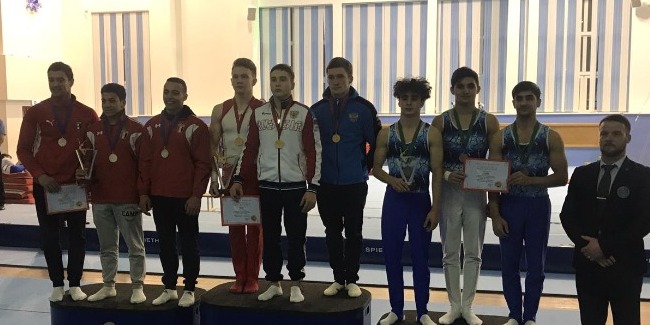 There was held international tournament in Artistic Gymnastics named in honor of Larisa Latynina in the City of Obninsk, Russia, on December 1-5.

In this tournament, the members of the Men`s Artistic Gymnastics National Team - Sarvar Aliyev, Aghamurad Gahramanov, Javidan Babayev represented our country in the competitions of seniors, while Samad Mammadli, Mansum Safarov, Ramin Damirov and Rasul Ahmadzada performed in the juniors` events.

Among our gymnasts, the best result was shown by Samad Mammadli. Thus, having left behind all his rivals on Rings and Horizontal Bar, he ranked 1st. Samad also became 3rd for his performance on Vault. Rasul Ahmadzada, another gymnast performing among juniors, became 3rd on Floor.

In the competition of seniors, the best result was demonstrated by Javidan Babayev. He took the 2nd place on Rings and became 3rd on Floor. Sarvar Aliyev ranked 3rd for his performance on Parallel Bars.

The Azerbaijani gymnasts won the Bronze medal in the team competition.