Azerbaijan becomes the first in the Grand Prix in France 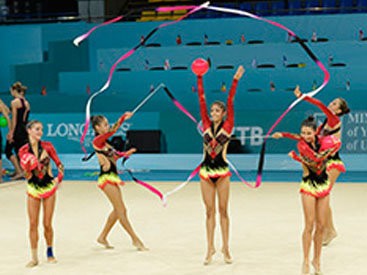 An Azerbaijani team in group exercises has taken the first place for its performance with 3 balls and 2 ribbons at the Rhythmic Gymnastics Grand Prix held in French city of Thiais.

The second place was taken by the Israeli team and the third one - by the Chinese group. The Azerbaijani National team included Sabina Abbasova, Aliya Pashayeva, Siyana Vasileva, Diana Doman, Aliaksandra Platonova and Aynur Mustafayeva.