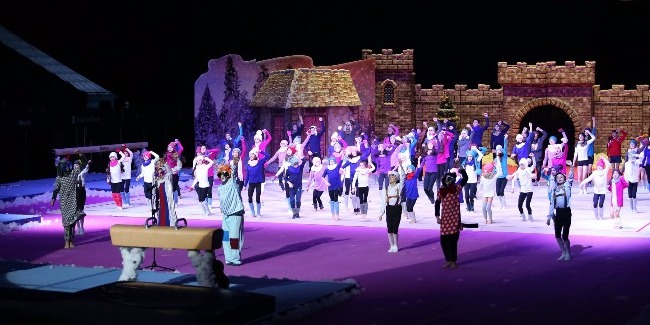 The New Year celebrations, cheerfully awaited by everyone, is drawing near. This holiday, on the eve of which we believe in realization of miracles, takes us to the world of fairy tales reflecting our childhood fantasies.

Starting the journey with these thoughts, our national teams in gymnastics disciplines plunged the audience into a festive mood on the threshold of the Solidarity Day and New Year demonstrating a real unity. Thus, in order to grant the gymnastics fans wonderful day, members of the national teams willingly prepared for the New Year show called "Town Musicians of Bremen". Milli Gimnastika Arenası (MGA, National Gymnastics Arena), where we always watch the competitions, this time, decorated with the famous fairy tale’s sceneries, led us to the world of miracles.

The plotline of the show was staged under the direction of Head Coach of the Rhythmic Gymnastics National Team Mariana Vasileva based on the fairy tales by the Brothers Grimm. And, of course, along with being a sportsmen, our gymnasts and coaching staff, which in no way yielded to professional actors, greatly succeeded in their roles having demonstrated their artistry and dancing skills.

The show, where the adventures of a young Troubadour and his friends were demonstrated to the legendary music, presented the audience one of the most unforgettable days.