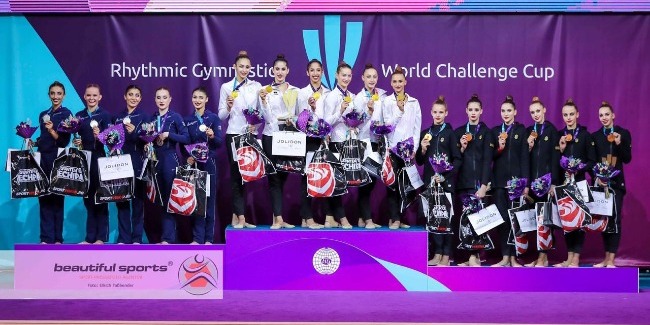 Today, the World “Challenge” Cup series in Rhythmic Gymnastics have completed its work in the city of Cluj-Napoca, Romania.

First, Azerbaijani team in group exercises consisting of Aliya Pashayeva, Darya Sorokina, Ayshan Bayramova, Zeynab Hummatova and Diana Ahmadbayli became the Silver medalists with 49.950 points in the All-Around at the World Cup. On the last day of the event, there were held the Apparatus finals. The second medal of our girls was for their 5 balls routine (26.100). The performance of our gymnasts with 3 hoops and 2 pairs of clubs in group exercises brought them “Bronze” (24.650).

The best result among our gymnasts performing in Individual program belonged to Zohra Aghamirova. Thus, Zohra ranked 7th for her final performance with a ball (19.800).