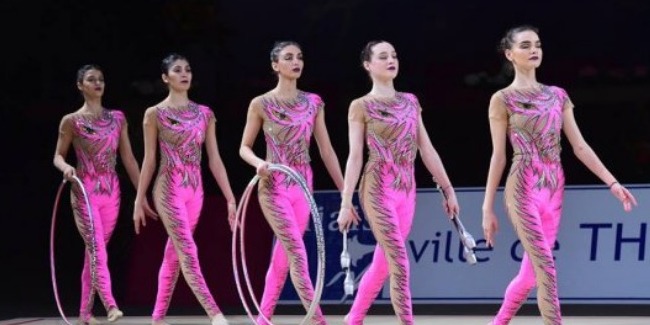 Azerbaijani team in group exercises succeeded to win the Silver medal at the end of the contest continued for last several days. The composition with 3 hoops & 2 pairs of clubs to the music of “Pink Panther” executed by  Aliya Pashayeva, Siyana Vasileva, Ayshan Bayramova, Diana Ahmadbayli and Zeynab Hummatova was scored 23.950 points by the judges. Thus, our girls mounted the 2nd step of the podium. The Gold medal of the tournament was awarded to Ukrainian team and Bronze medal to Russian gymnasts accordingly.

It should be mentioned that our gymnasts competing within groups ranked 5th in the All-Around among 13 teams.

At the event, Zohra Aghamirova representing our country in Individual Program became 15th  in total of scores received for performances with 4 apparatus.