3 medals of our Trampoline Gymnastics National Team from Sochi 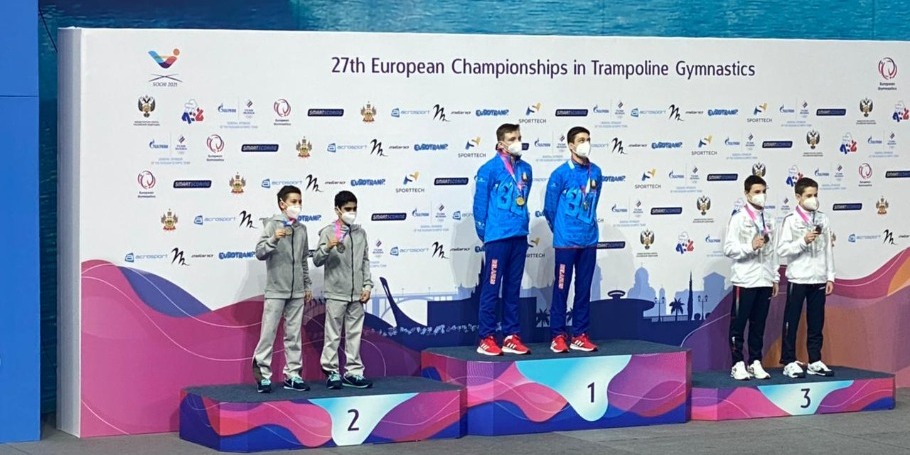 Last weekend was marked by the medals won by the Azerbaijani gymnasts at the European Championships.

Thus, the members of our National Team added the Silver and two Bronze medals to our medal box from the European Championships in Trampoline Gymnastics, Double Mini-Trampoline and Tumbling, which took place in the City of Sochi (Russia) on April 29 - May 2, 2021.

The first medal of the Championships came from our tumbling athletes competing among the juniors. Our team consisting of Huseyn Asadullayev, Tofig Aliyev, Adil Hajizada and Bilal Gurbanov mounted the 3rd step of the podium.

Another medal came from the Synchronized Pair, which won the Silver medals from the last World Age Group Competitions - Huseyn Abbasov and Magsud Mahsudov. They repeated their results from the Worlds and won the “Silver” at the Continental Championships as well.

It should be mentioned that 13-year-old Huseyn and Magsud, who competed among the gymnasts aged 13-17, competed with older and more experienced gymnasts and took their places on the podium in this event.

The last medal of the Championships was brought by our experienced tumbler Mikhail Malkin. Mikhail, who has not competed in the large-scale international competitions for a long time due to injury, won the Bronze medal in the finals, which took place in a tense atmosphere.

Our only female gymnast in individual trampoline competitions, Seljan, also reached the finals of the Continental Championships. Seljan became the 6th in the decisive final. For the first time, the Azerbaijani women's representative competed among the eight strongest gymnasts of the European Championships among seniors.

Congratulations to everyone on this success and we wish our gymnasts even greater success!