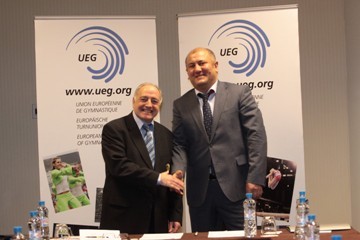 There has been held a signing ceremony of the first partnership agreement between the European Union of Gymnastics (UEG) and “Kapital Bank” of Azerbaijan within the framework of the European Championships in Artistic Gymnastics in Moscow today.

The UEG President, Mr.Georges Guelzec, making a speech at the ceremony, emphasized a significance of this agreement. He also mentioned that Kapital Bank was closely cooperating with Azerbaijan Gymnastics Federation being its partner at two European Rhythmic Gymnastics Championships held in Baku in 2007 and 2009.

"I am sure that our cooperation will give the positive impulse to the development of all gymnastics disciplines in European countries," stated Mr.Guelzec. From his side, Mr. Yashar Mammadov, Deputy Chairman of the Kapital Bank’s Board, informed the attendants of the ceremony that “Kapital Bank” was the bank with the richest and longest history in Azerbaijan. He also noted that this was the biggest bank in the country to celebrate its 140th Anniversary next year.

"Our bank also supports many projects in the field of culture. Here, I can mention the "Eurovision" song contest held in Baku last year and also the anniversary concert dedicated to the memory of the great Azerbaijani singer and composer, Muslim Magomayev.”

"We are interested in further partnership with the UEG and express our intention to attend the European Championships in all gymnastics disciplines," summed up the Deputy Chairman of the “Kapital Bank’s” Board.