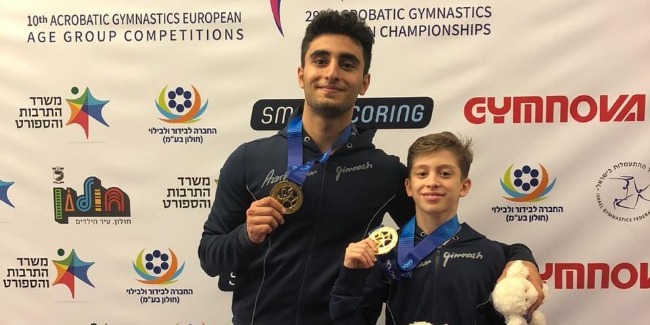 Today, the 29th Acrobatic Gymnastics European Championships has come to an end in the City of Holon, Israel.

For the first time in history of the Azerbaijani Gymnastics, our representatives succeeded to win the Gold medal in the age category of “juniors” on the last day of the events. Murad Rafiyev & Daniel Abbasov, performing within Men`s Pair, were honored with the title of the “European Champion” for their Dynamic exercises (28,600), having left their rivals behind. Thus, the Azerbaijani gymnasts won the complete medal set. Earlier, they won “Bronze” for Balance exercises, while they became the Silver medalists in the All-Around (combined exercises).

Today, another medal was won by the Mixed Pair consisting of Abdulla Al-Mashaykhi & Ruhidil Gurbanli in the age category of “seniors”. The Gymnasts were honored with the Bronze medal for their Dynamic exercises (28,680) in the final.  The prize winners of the last European Games won the Bronze medals on the second day of the competitions, while they were 5th in the All-Around.

Seymur Jafarov and Murad Akbarov competing within Men`s Pair among seniors, stopped a step away from the medal. In the final of Balance exercises, our gymnasts ranked 4th, having received 28,550 points. They took the 5th place in the All-Around and 6th place for their Dynamic exercises accordingly.

So, Acrobatic Gymnastics European Championships finished successfully for our gymnasts.