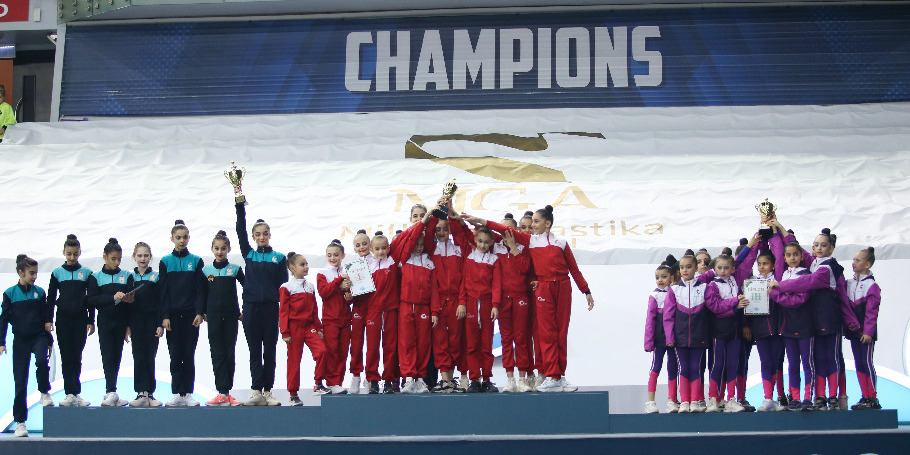 “Milli Gimnastika Arenasi” recently hosted the world in Rhythmic Gymnastics stars, opened its doors to young gymnasts on May 3 & 4, this time.
186 gymnasts, including 123 individual and 63 gymnasts in Group exercises (12 groups), from 9 clubs, participated in the two-day competition at the 27th Baku Championship in Rhythmic Gymnastics among Age Categories.
Athletes competed in the individual program in the age categories of youngsters (born in 2012, 2013, 2014), pre-juniors (born in 2010-2011), juniors (2007-2009), while gymnasts within group exercises took part in the age categories of youngsters (born in 2012-2014) and pre-juniors (2010-2011).
During the two-day magnificent contest among the most graceful representatives of gymnastics, there were determined the strongest gymnasts in the Individual and in Group exercises All-Around competitions.
According to the final results, teams with the best results were awarded with the trophy in the individual program and in group exercises among Age Categories.
The gymnasts of “Ojaq Sports Club” won the first place, the representatives of Baku Gymnastics School were the second and the members of the “Gracia Sports Club” took the third place.
Fans, who enthusiastically supported our gymnasts on April 22-24 at “Milli Gimnastika Arenasi”, came to the competition of our young athletes with the same excitement.
Demonstrating the interesting performances to the spectators on the gymnastics floor to the applause of the audience, gave a sense of pride, joy and great stimulus to the future stars of Gymnastics.