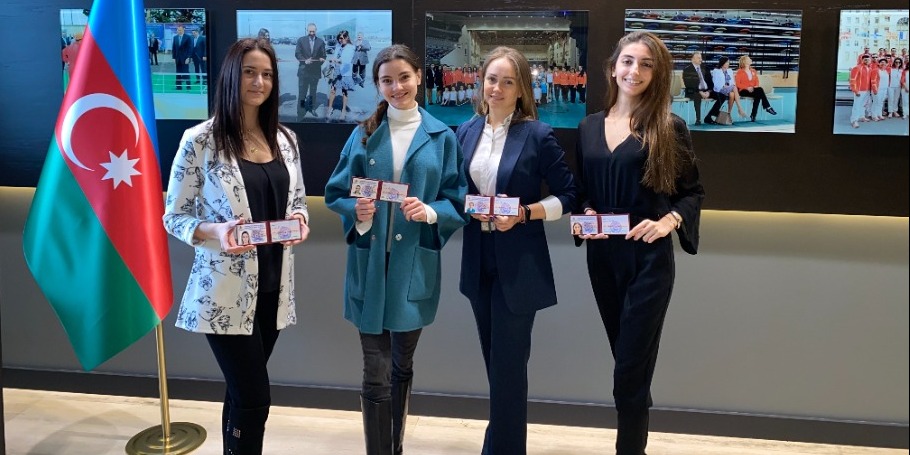 Four representatives of Rhythmic Gymnastics - Siyana Vasileva, Aliya Pashayeva, Anastasiya Prasolova, Sabina Hajiyeva - were awarded with the title of "Honorary Master of Sports" for their achievements during their sporting career.

Siyana Vasileva and Aliya Pashayeva became the Silver (Baku / Azerbaijan / 2014) and Bronze (Guadalajara / Spain / 2018) medalists within the team in group exercises at the European Championships. Aliya Pashayeva was also a member of the team in group exercises which qualified for the Tokyo-2020 OlympicGames according to the results of the All-Around at the 2019 World Championships held in Baku.

Anastasiya Prasolova was a member of the team in group exercises, which represented our country at the Olympic Games (Beijing-2008) for the first time in the history of the Azerbaijani Rhythmic Gymnastics and tookthe 7th place in the All-Around Final.

Our current coaches, who have been awarded with the title of "Honorary Master of Sports" for their achievements as athletes, are already bearing the fruitsof their hard work with their gymnasts. Thus, Anastasiya Prasolova's gymnast won the “Silver” at the Baku 2015 First European Games, as well as the “Bronze” at the 2015 European Championships. Siyana Vasileva was one of the coaches of the team in group exercises, which won the Silver and Bronze medals at the European Championships held in Kyiv (Ukraine) in 2020. Aliya Pashayeva and Sabina Hajiyeva serve for training of young generation of rhythmic gymnasts at the Baku Gymnastics School and Milli Gimnastika Arenasi(MGA, National Gymnastics Arena) within the preparation group for the National Team accordingly.

We congratulate our former gymnasts on this honorary title and wish them success in their coaching activitydirected to the development of Rhythmic Gymnastics!