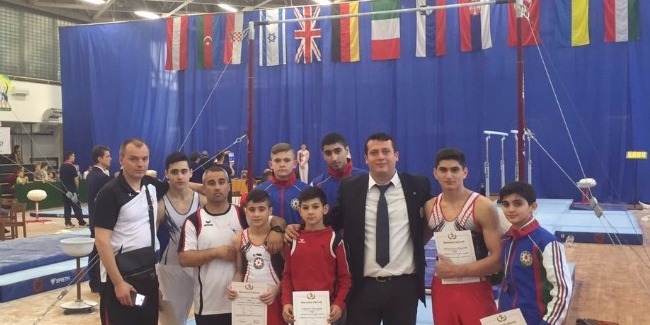 Performing within the 1st age category (1998-1999), Murad Agharzayev won the silver and bronze medals in the final of Floor exercises and on Vault accordingly. Having ranked 8th in the All-around, Murad became the 4th in the final exercise on Horizontal Bar and 5th on Rings.  Another gymnast Timur Bayramov, who made a debut on the international arena, participated in the finals on Horizontal Bar (5th place), Rings (6th place) and Vault (8th place).

Sergiy Onbysh, Javidan Babayev and Aghamurad Gahramanov performed in the 2nd age category (2000-2001). Final on Vault brought “gold” to Sergiy, and, after performance on Parallel Bars, he mounted the second step of the podium. In this age category, his teammates – Javidan Babayev, making a debut on the international arena, took the 4th place in the final on Rings, while Aghamurad Gahramanov shared the 4th place with a gymnast from Great Britain on Floor exercises and became the 5th on Vault.

In the youngest – the third junior age group (2002-2003), Samad Mammadli won more than a set of medals ("gold" – Floor, "silver" – Pommel Horse, "bronze” - All-around). His performance on Parallel Bars brought him the second silver medal. In this exercise, Mansum Safarov, having just stepped on the international field of play, shared the 4th place with a German gymnast.

The European Championships in Artistic Gymnastics (Bern, Switzerland – May 25-29) awaits our juniors ahead, where Azerbaijan joins the team competition for the first time.