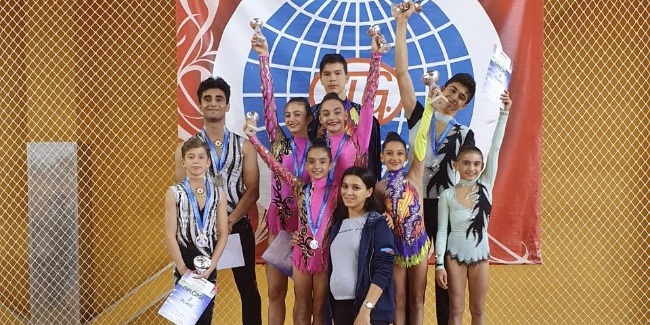 The international tournament in Acrobatic Gymnastics has completed its work in the City of Saint Petersburg, Russia.

The Azerbaijani gymnasts completed the tournament with 3 medals. Thus, the performances of our Mixed Pair consisting of Samira Rustamova and Rauf Jabbarov (aged 11-16), who took their first steps on the international arena, were estimated with 80,800 points, and they won the Silver medal. Our Men`s Pair - Murad Rafiyev and Daniel Abbasov - competing in the age group of 13-19-year-old-gymnasts and not falling behind their teammates, also won the Silver medal (83,360 points) with their successful performance.

Another Silver medal was awarded to our Group - Leyla Bashirova, Nazrin Farmanova, and Mansuma Mammadzada - performing among 12-18 aged gymnasts. Azerbaijani girls mounted the 2nd step of the podium, having received 82.850 points from the judges.