Our jumpers compete in the Russian Open Tournament 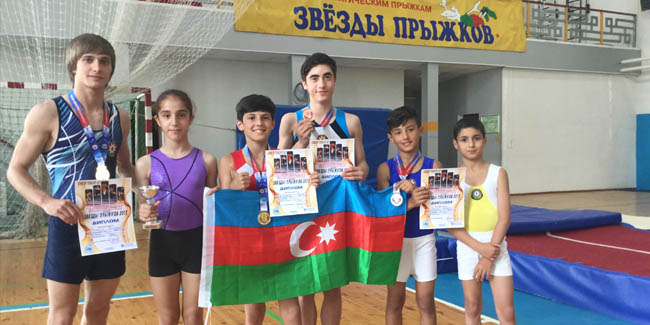 The members of our National Team in Tumbling have performed at the Russian Open tournament held in Krasnodar and Stavropol last weekend.

Our gymnast, benefitted from their fresh experience gained from the training camp organized in Stavropol before the competitions, demonstrated successful performances in the tournament. Thus, Mikhail Malkin, competing among the seniors, left behind all his rivals and won the gold medal. Farid Mustafayev became a bronze medallist in the competitions of gymnasts born in 2001-2002. Another gymnast, Tofig Aliyev won the gold and silver medals, having distinguished himself in his age group (2003-2004). Our representative Adil Hajizada, who competed with the gymnasts born in 2005-2006, completed the events with the gold and silver medals as well.

The only female gymnast of our team participating in the tournament, Zeynab Gasimli, also didn’t fall behind of her teammates and won the silver medal of the competitions among gymnasts aged 11-12.