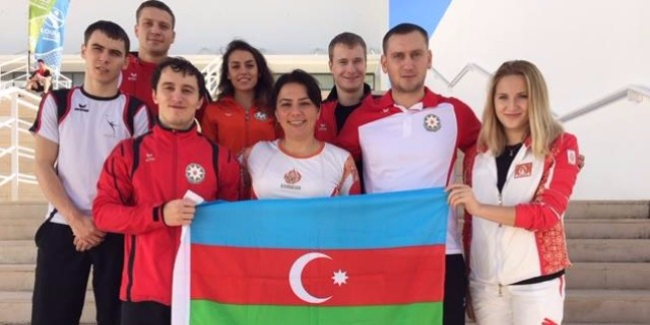 This year’s World Cup final in trampoline gymnastics and tumbling has come to the end in Portuguese Loulé city. About 150 jumpers of the world took part in these competitions.

In the World Cup, Azerbaijan was represented in trampoline gymnastics in the individual and synchronized competitions both among men and women.

The best result was achieved by Ilya Grishunin. He stopped a step away from the “bronze” medal in the final of individual performances among men. And Sviatlana Makshtarova became the 8th of the finalists in women’s events.

Our men’s and women’s synchro pairs competed in the finals. As a result, the men’s pair consisting of Ilya Grishunin and Oleg Piunov ranked the 6th. The 7th was the place taken by the women’s pair - Sviatlana Makshtarova and Sabina Zaitseva.

Loulé was receiving the international tournament at the same time with the World Cup where a gymnast Dmitriy Fedorovskiy won the bronze medal at the events on double mini-trampoline.

It should be mentioned that this was the last tournament of the jumpers prior to the World Championships to be held in Odense (Denmark) on November 26-29.