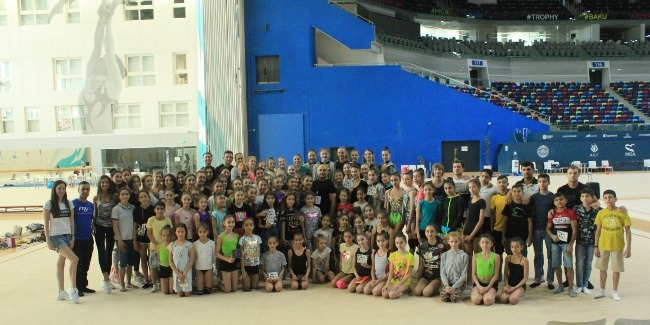 National Gymnastics Arena in Baku hosted a meeting of gymnasts with the Honored Artist of Azerbaijan, the star ambassador of the World Rhythmic Gymnastics Championship, which will be held in Baku on September 16-22 - singer Miri Yusif Mirbabaev.

During the meeting, the musician told the gymnasts about his work, stories from his musical career, answered numerous questions of the athletes.

Miri Yusif emphasized that he had repeatedly attended international competitions held in the National Gymnastics Arena and watched the performances of athletes with great interest. The musician wished all gymnasts to achieve great heights and success in sports.

At the end of the meeting, Miri Yusif signed autographs and posed for memory with the gymnasts.

In an interview with Trend, the star ambassador of the World Rhythmic Gymnastics Championships in Baku shared his impressions of the meeting with the athletes.

“The feeling from meeting with our gymnasts is wonderful. They charged me with their positive energy. We had an interesting conversation, the gymnasts told me about their performances at the competitions, about their training. I answered numerous questions of the gymnasts. Of course, we also talked about my work and songs," Miri Yusif said.

According to the musician, he has an idea to implement a musical project, where Azerbaijani gymnasts will be involved: "There is such an idea, I think that in August we will do it, but I will not say anything about it in advance."

Miri Yusif also said that it is a great honor for him to become the star ambassador of the Rhythmic Gymnastics World Championships.

The honored artist noted that gymnastics actively develops in Azerbaijan.