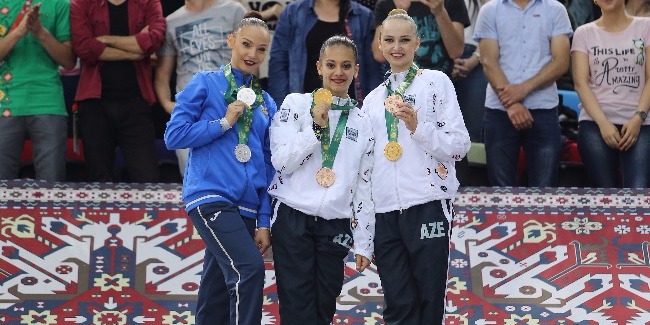 Rhythmic Gymnastics events held at Milli Gimnastika Arenası (National Gymnastics Arena, MGA) and taken place within the framework of the 4th Islamic Solidarity Games for the first time have come to an end namely at a such atmosphere.

At the exciting finals, Marina Durunda won her first gold medal in the individual program with a hoop (17.600). Few minutes later, Azerbaijani audience experienced a joy of another medal. Our representative Zhala Piriyeva received the bronze medal (16.050) namely in this program. Gymnast from Uzbekistan Anastasiya Serdyukova took the second place (16.450).

The next target was the performances with a ball. Having demonstrated the best result in this program, Zhala Piriyeva managed to add a gold medal (17.550) to the medal box. Representative of Uzbekistan was awarded with silver medal (16.950), while Marina Durunda received the bronze medal (15.800).

As for the performances with the clubs, our representative Marina Durunda had to content herself with the “silver” (16.550). The 1st and 3rd places were taken by Anastasiya Serdyukova (16.900) and Sabina Tashkenbaeva (16.300) from Uzbekistan, respectively. Zhala Piriyeva stopped a step away from the medal.

The last final performances were demonstrated with a ribbon. Marina’s favorite apparatus, always brining her success, mounted her to the first step of the podium this time as well and added the 3rd gold medal (15.450) into our account at the competitions in individual program. Losing her teammate with a slight difference in score, Zhala was awarded with the silver medal. Sabina Tashkenbaeva (Uzbekistan, 14.950) took the 3rd place.

So, Azerbaijani representatives have won 4 gold, 2 silver and 2 bronze medals in total at Rhythmic Gymnastics events for the first time included into the program of the Islamic Solidarity Games.

It should be reminded that Marina Durunda, Zhala Piriyeva and Zohra Aghamirova won the gold medal in team competition on the first day of the events (May 12).