Samad Mammadli wins the “Bronze” in the International Tournament 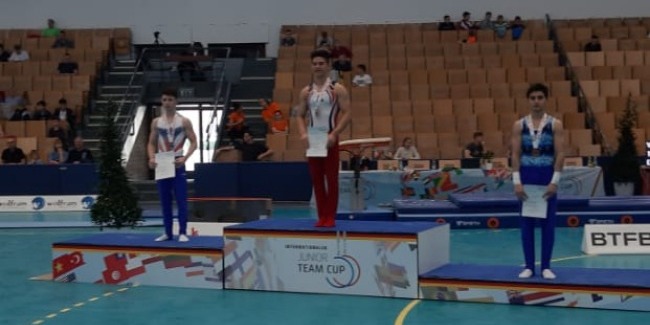 Yesterday, names of the winners of the traditional Artistic Gymnastics “Junior Team Cup” International Tournament were announced in the capital of Germany - Berlin.

At the event with the participation of 140 junior gymnasts from 26 countries, our representative and the participant of the 2018`s Youth Olympic Games – Samad Mammadli was awarded with the Bronze medal distinguishing himself among his peers. The judges scored his performance on Pommel Horse with 12.850 points. Samad succeeded to reach the Final for his execution on Horizontal Bar and as a result became the 6th with 11.550 points.

Our other representative – Rustam Ahmad managed to reach the Final on Pommel Horse in his age category.  The Azerbaijani junior gymnast completed the competition at the 4th place with 12.200 points at the Final.